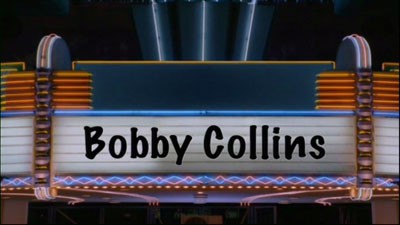 
The Show
Living as a stand-up comedy fan in the New York metropolitan area all my life, I've heard of just about every stand-up comic of any significance, and Bobby Collins certainly meets that criteria, as I've certainly seen his name in ads for Caroline's and Governors for decades. But somehow, I've never actually seen him perform, so I wasn't quite sure what to expect from him. Thus I was of two minds in approaching this special, which was recorded during a June 2011 performance at the Comix comedy club at the Foxwoods Casino in Connecticut. I was curious to finally see a guy I'd heard about forever, but I also wondered why, if I had heard about him forever, why he's never hit it big. Apparently, I have good instincts about such things.

Taking the stage before a "lively" lounge crowd at Foxwoods, Collins is ready for an audience that doesn't keep its thoughts to itself, with an act that is loud and aggressive, punctuated by frequent, odd, annoying, high-pitched screams. Not since the days of Sam Kinison has screaming been funny, and it's not funny here, as it blends with Collins' twitchy, near-manic rantings to create a stage persona that feels past its expiration date. Despite that, the crowd seemed pretty into the show, though if you've ever been to a non-feature comedy show at a casino (as in one not held in a big theater) there's something not quite right about the crowd, who are normally either killing time or trying to get over a bad day of gambling.) The whole setting, with a bar dominating the room, some low-rent signage on the stage and a sad interruption from a dropped bowl, doesn't help sell Collins' comedy. 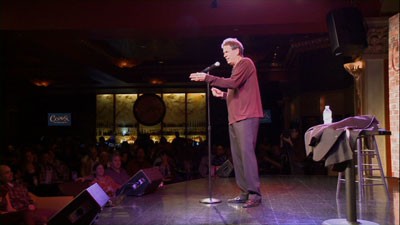 Part of the problem is the content of his act, which is rather generic and well-worn. How many comics have you heard talking about fat women, dogs, stupid people, politicians, reality television and getting old? To make it easier, how many comics have you heard NOT joke about these things? (Hint: they are probably your favorite comedians.) As Collins rants along, moving from topic to topic, using punchlines you've probably heard before (The gene pool could use some bleach? Really? Is this the Catskills?) he makes things more obnoxious, at one point harassing a young couple in the crowd, with an unfunny bit about their sex life. Once in a while he'll catch upon something that actually works, like his bit about the advantages of EZ-Pass, which is even funnier if you've experienced the joys of driving to Foxwoods. But then he'll go right back to screaming about buying sanitary pads for his sister and the funny disappears like cash at a Baccarat table.

What's really amazing is the way he throws around casual racism, and the way the crowd eats it up. His first bit, about dancing, starts with the word negroes, before moving on to Jews and a Polish joke. Polish jokes haven't been acceptable or funny for that matter since the mid-'80s. He goes on to joke about Hispanic women, violent Puerto Ricans, and Spanish-speaking bus boys. These things could be funny in the right context, along with his frequent complaints about stupid people, whether they work for the TSA or a dollar store. Unfortunately, there's a lack of clever jokes to go with these topics, with silly voices and increased volume filling the void to disappointing effect. 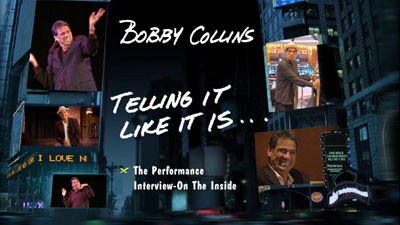 The DVD
The 56-minute special arrives on one disc, in a standard-width keepcase with a promotional insert for the non-profit Zeno Mountain Farm. The disc has an animated, anamorphic widescreen menu with options to play the special or check out the extras. There are no scene selection (or chapter stops for that matter) and no audio options, subtitles or closed captioning either.

The Quality
The anamorphic widescreen transfer on this special looks solid, but there are definite issues, starting with a general softness to the image, black levels that are more like a deep grey and some slight buzzing in areas of solid color, especially in the wide shots. It may be the lighting in the room, but everything has a rosy tint to it as well. There are no issues with compression artifacts though, and the entire presentation is clean throughout, letting you see all the way to the bar at the side of the room.

The Dolby Digital 2.0 presentation is uneven at best, sounding severely tinny and hollow throughout, while there are moments where Collins moves away from the mic and you can barely hear him at all. Part of it is the setting, but you'd think they could get a decent feed from the soundboard (not to mention the fact that Collins is wearing a second mic on his collar.) Either way, it's a straight-foward presentation, balanced around the middle with no noticeable dynamic mixing.

The Extras
The only extra included is a six-minute interview with Collins, titled "On the Inside." It's mainly about Collins the person, looking at his childhood, his interest in comedy and his family, including his special-needs daughter. It would probably be more engaging if I appreciated his comedy, but that's not the case here. 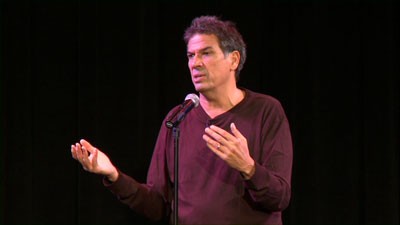 The Bottom Line
I'd been aware of Collins as a comic for a long time, but this is the first time I can recall seeing his act, and unfortunately, it didn't do much for me, as his act is mainly frantic energy and moldy jokes. The presentation isn't even top-notch, as the audio is weak and echo-y, and the extras are limited. If you like old-school jokes, and considering he's made a lengthy career with this act there's definitely an audience, you might get some laughs out of Collins.