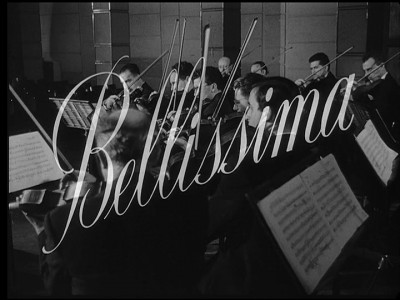 Bellissima has a simple story but it is a meaningful one. This is the kind of story that will stay with you long after the credits have ended. The film begins with an open audition in Cinecitta, where many mothers are taking their young daughters to audition for a part in what should be a successful Hollywood production. The story focuses in on one family: a mother named Maddalena Cecconi (Anna Magnani) and her daughter Bellissima. Cecconi wants her daughter to be cast in the production so that she won't have to grow up living such an impoverished lifestyle as they are living as a lower-class family. Her dreams are built upon great intentions of desiring the best for her daughter but she doesn't consider what the hopes of her own child are and this is where some dramatic questions are held.

One of the marks of a truly great film is when it can transcend the material to become an entirely mesmerizing experience that you cannot help but become absorbed into. Visconti, one of the greatest Italian neorealist filmmakers, was one of the only directors capable of understanding this concept without any reservation. Bellissima is unlike other dramatic or "melodramatic" films about the failings of Hollywood hopes because it doesn't portray the characters as simpletons who are unable to recognize the scope of filmmaking production. Visconti portrays the difficulties of attempting to break into the film industry with delicate precision. Cecconi is a character that recognizes the potential pitfalls but also recognizes potential successes that could bring stardom, financial stability, and happiness: the kind which she receives at the local outdoor theater as she is able to escape into the dreamy celluloid wonders. Yet the happiness she feels watching a film doesn't necessarily equal happiness for her daughter in starring in one. The path isn't paved with golden roads. 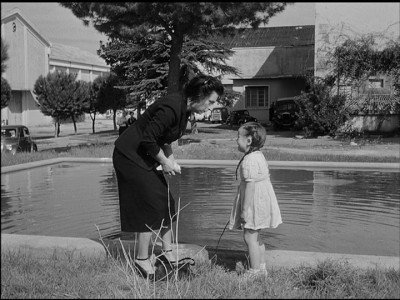 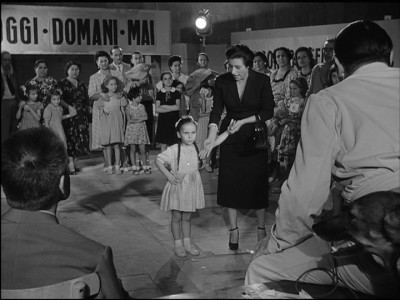 These characters seem almost to be real people instead. Filmmaking is a difficult industry for many people to break into and succeed in. Maddalena Cecconi (Anna Magnani) seems aware of this but she wants to give her daughter a prosperous future without the pain of poverty that she herself has known. The one crucial element that she seems to entirely forget to take into account is what it is her own daughter would want for herself. Does Bellissima want to become a movie star child? Or is it only something that Cecconi has wanted for her? These are fundamental questions of the film and Visconti makes it the essential matter of the film above any other dramatic question. It makes Bellissima an experience in storytelling, about the significance of valuing someone without forming a superficial idea of what it is that person wants for themselves. Let the child speak and articulate their own feelings - even if that means relying upon their nonverbal cues (a pivotal scene in the film features Bellissima crying to sleep after a long, laborious day essentially based around constant preparation needed for the audition).

Fans of neorealist cinema will consider this a hidden gem. It is difficult to believe it has taken so much time for Bellissima to find its way into a media release in North America. Even with such a considerable wait to see the film it is well worth experiencing and the filmmaking quality is uniformly high. It is difficult to imagine any fan of dramatic films, let alone classic Italian ones, being even the slightest bit disappointed. The filmmaking is just excellent from the opening frame to the final shot. Performances are emotionally satisfying and memorable.

The fanbase for Magnani (who delivered an award winning performance in The Rose Tattoo) and Visconti (director of the critically acclaimed Senso, The Leopard,  among many others) will be pleased with this outing, which takes the viewer on an emotionally charged journey through the highs and lows of filmmaking and the high cost of the search for fame. 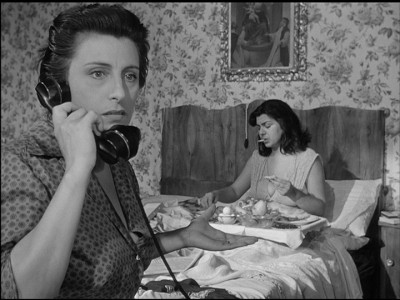 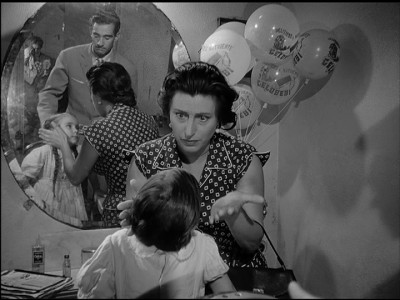 Bellissima has been presented in the original theatrical aspect ratio of 1.33:1 (full frame). The black and white cinematography is beautiful and well-reproduced. The details in the vibrancy and depth of the cinematography make experiencing the visuals all the more impressive. This release has been promoted as having been restored and remastered. Bellissima has clearly undergone some extensive restoration work for this release and there's little doubt that it has never looked this good before now. Print damage seems nonexistent, contrast is impressive, and the sharpness is surprisingly relevant.

The only audio option is the original Italian mono audio mix. This has clearly undergone some restoration as well. Hisses and other distracting audio problems are gone with the release. The clarity and ease of understanding the dialogue is impressive. Subtitles are provided in English (and are optional, as the subs can be removed if desired). The one downside to the subtitles is that the somewhat large yellow-text used can sometimes become distracting during the viewing experience, but that distraction is minimal too.

The only bonus feature (if you can even call it that) is the original theatrical trailer. This is a somewhat relevant mini-inclusion in that it easily demonstrates the huge improvements of the restoration work because of the poor print quality used for the trailer's source. It's the kind of difference that makes one remember how important film restoration always is for classic cinema. 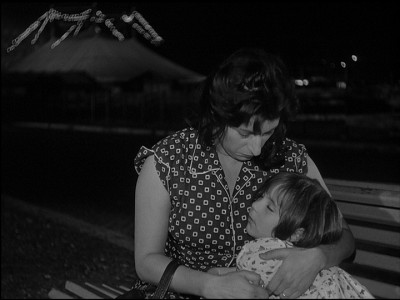 Bellissima has an incredible performance by Anna Magnani as a strong-willed mother who is determined to give her daughter the opportunities that she never had. Luchino Visconti is a powerhouse filmmaker who can turn an ordinary subject into a fascinating character study with apparent ease. Visconti may have struggled to make the film but it doesn't feel that way in the slightest. This is masterful storytelling. There is a relevant message ingrained within about valuing emotional happiness over financial well-being and it is one that has maintained just as much importance in today's world. Happiness should always be first.