Somehow last year, I managed to completely find myself oblivious to the fact that Takashi Miike's magnificent "13 Assassins" was in fact a remake of a 1963 tale of the same name by legendary director Eiichi Kudo. The film was the starting point for an informal trilogy by Kudo that also includes "The Great Killing" and "Eleven Samurai." While Kudo's film may predate Miike's by nearly 50 years, it is no less technically proficient and what it lacks in sheer spectacle, it makes up for in unbridled artistry and philosophy. The two films make an interesting double-feature, as both are both masterpieces that provide a stunning example of how the concept of a remake can be a very positive factor. 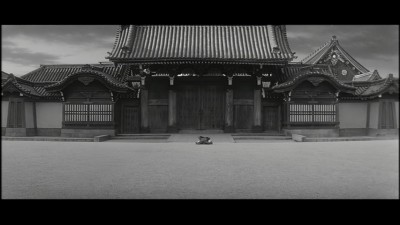 As in Miike's film, the general driving point of the story is an insane Daimyo who is on the path to becoming a high ranking political official, callously rapes the daughter-in-law of a host while on a journey across Japan. Not stopping there, Lord Naritsugu (the Daimyo) kills her husband when he seeks the naturally expected instance of revenge as well as woman herself. Unluckily for him, morality wins out over political policy and a former, legendary, but aged samurai, Shinzaemon takes the seemingly suicidal mission of forming a band of fearless warriors to bring justice to the world by removing Naritsugu from it. 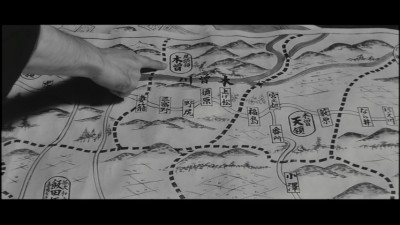 "13 Assassins" is not a film classified as quickly paced, running 126 minutes, Kudo wastes not a second of screen time, making every long, carefully choreographed shot matter. This original telling of the tale has a distinct purpose: to take a look inside (albeit shallow at times) the soul of a samurai as he must defy contrived convention to right a wrong of purely human meaning. Kudo's camera work is a work of beauty and the first half of the film, which serves as the buildup to carrying out the assassination feels like it could be from a somber character drama at times, instead of an ultimately intense action film. The camera work is extended all the way to the film's nearly 30 minute finale, that is amazingly intense for its time, taking the long steady shots into narrow corridors of death, giving the viewer a true sense of the claustrophobia associated with battle. 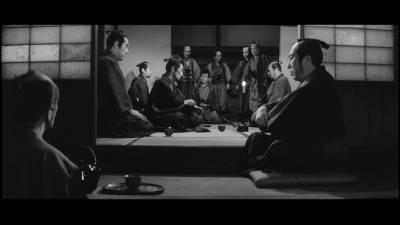 From a storytelling standpoint, "13 Assassins" suffers from some minor stumbles. Despite the title, only a few standout characters of the titular baker's dozen are distinguishable and viewers of both this and Miike's take will be saddened to see how underplayed the 13th member of the group is. However, the heavy focus on Shinzaemon and his association with Naritsugu's head of security makes for a tense cat-and-mouse game. Kudo's film wonderfully captures traditional genre elements such as honor, duty, and loyalty without being heavy handed. The film is unequivocally a technical masterpiece and a magnificent encapsulation of the romanticism associated with samurais, with a good dose of sobering futility thrown in for good measure. If you've only seen Miike's take, you must see this original, it is familiar enough yet still different to ensure neither version is the definitive take on this story.


The 2.35:1 anamorphic widescreen transfer captures the essence of the film's crisp, almost hauntingly sharp black and white cinematography admirably. Contrast is spot-on and detail is above average. Compression artifacts are kept to a bare minimum, while edge-enhancement is non-existent. The print does suffer from some minor damage, while grain levels are very low, but again, no sign of DNR is spotted.


The Japanese stereo audio track is relatively clean and free from audible hissing, however, as with many older films, high-end distortion is a noticeable factor. It's not the most dynamic track, nor is it expected to be one. English subtitles and cultural translations are available in both yellow/green/red subtitles or standard white/grey. A plain subtitles only track is available in both color options, while a basic English captions track is also included.


The extras include a text-based set of production notes (which include a few additional cultural translations not included on the main subtitle track), cast and crew bios, and some original trailer for the film.

AnimeEigo's release of "13 Assassins" is a true delight. It's a very technically sound release of a phenomenal film. Kudo's film is beautiful, tragic, and intense, often at the same time. For me, this marked the discovery of a director and hopefully the promise stated on the cover of AnimEigo bringing "The Great Killing" and "Eleven Samurai" to DVD as well comes to fruition; if they are half the films this is, they will be well worth seeing. Highly Recommended.