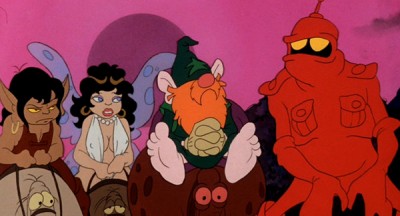 Ralph Bakshi certainly seemed to recognize unique ways to create sci-fi/fantasy worlds in animation. Wizards doesn't necessarily seem reminiscent of anything else. Perhaps other Ralph Bakshi movies? Even that doesn't seem to be a positive given because of how this particular filmmaking experience was aimed at appealing more directly to families and a wider audience than some of his other motion pictures (which are often talked about as being "edgier" as if that's always a good thing). Wizards was made in a unique time of production. It was produced and released by 20th Century Fox and at around the same period of creation that led to George Lucas's Star Wars changing sci-fi cinema forever. Massive competition didn't prevent the film from being a modest box-office success in cinemas and Bakshi had finally succeeded in creating a strange animated family film.

Wizards almost seems to be designed as a bizarre experience. It's the kind of animated outing that people discuss when referring to strange animated movies. It's a small and unique category. Other efforts by Bakshi are undoubtedly placed in the same category. From the eclectic array of colors used in forming strange animation effects that feel as abstract as anything released from a major studio to its odd characters Avatar, Elinore, Weehawk, and Necron 99 there is bountiful creativity in Wizards. So much of it is just unexpected and completely unlike anything else in animation.

The story almost seems inconsequential. This is the primary reason why the film feels poorly made in some areas while impressive in other ways. The story tells of a war of wizards. Avatar (Bob Holt) is the befuddling one while Blackwolf (Steve Gravers) is a menacing and destructive leader. The war is between two sides and the sides were a disassociation attempt made between two leading wizards (and it turns out they are brothers too). Avatar has the help of the fairy Elinore (Jesse Welles) and the warrior Weehawk (Richard Romanus). The group sets out to put an end to the war created (menacingly) by Blackwolf. They are joined by Necron 99 (David Proval) who's also frequently referred to as Peace - and he is one of the most unique characters of all. 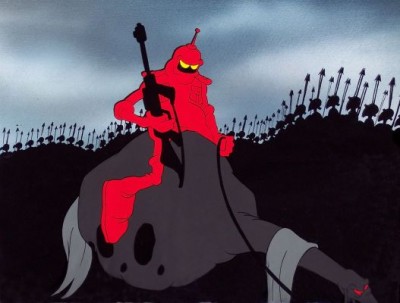 Bakshi sets out to make this a message movie and he does in fact succeed to some surprising extent.  Wizards stresses the dangers of a society controlled by powerful, dictatorship-like beings, and the terrible things that corrupted power can create. It's definitely a capable story when it comes to this perspective. Bakshi implemented an element of propaganda into the film by utilizing some Nazi clips. This is absolutely a disturbing aspect of Wizards and one that makes it a surprising PG-rated production. Bakshi's decision seems unnecessary to one degree but also educational to another. Younger audiences might be surprised to find that Wizards could actually start up a conversation about the holocaust. This aspect is important for parents to recognize.

The main reason this film worked for me was the unique animation (which feels so distinctive and unlike other animated efforts produced in the same time period). I thoroughly recommend the score by Andrew Belling too. It perfectly complimented everything that worked in the film. Wizards isn't a perfect movie - not at all. It is a production somehow capable of defying a traditional reviewing system. Even with a decidedly weak script (and an odd action-oriented conclusion showcasing the war in occurrence between both Wizarding sides) it somehow just finds a way to still work. Experience Wizards with some friends and see where its magical weirdness goes to.

Please Note: The images used in this review do not reflect the quality of the Blu-ray release.

Wizards is presented on Blu-ray in its original theatrical aspect ratio of 1.85:1 with a 1080p AVC encode. This is a notable upgrade and the difference in resolution is quite strong. The visuals are one of the primary reasons Wizards has a cult following. Ralph Bakshi is known for his bizarre animated sensibilities and the artwork seems well suited for the HD format.  While the encoding itself offers a more dynamic presentation the print has suffered from some scratches, dirt, and damage. It's nothing that severe but it's clear that more work could have been done in restoration efforts. Some fans might actually consider the odd presentation of the artwork an enjoyable part of the overall experience and that charm seems unique to films in this style.

Fans should be pleased by the inclusion of both the original theatrical English mono audio and a newly created 5.1 DTS-HD Master Audio track. The lossless surround sound option will obviously yield better and richer results in terms of creating an enveloping surround environment but the mono audio is what the film was originally released with in theaters. It's nice to have both options. The audio is crisp, clean, and with dialogue that is easy to understand. The music score by Andrew Belling sounds especially impressive on the new surround sound option. The film is also available in Spanish Mono.

Subtitles are available in English SDH (for the deaf and hard of hearing), Spanish, and French. 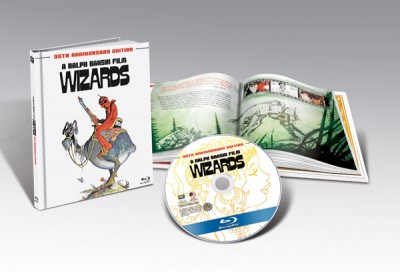 Wizards is presented in slim Digibook style packaging. The booklet itself isn't too lengthy at 24 pages long but it contains an introduction by Ralph Bakshi and wonderful illustrations of Wizards posters and production stills that fans should enjoy having in this well put together release.

The on-disc extras include Director's Commentary, a documentary interview entitled Ralph Bakshi: The Wizard of Animation (34:15), and an assortment of trailers, tv spots, and still galleries featuring drawings used for the film. 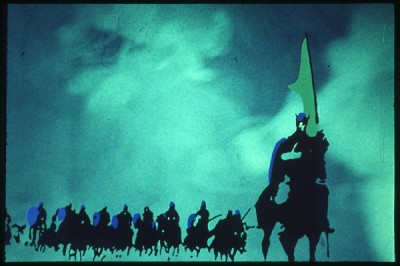 Wizards isn't exactly a "good" movie. It has a weak plot, poor character development, and it's all over the map. Yet there's still something worthwhile about the film.  It has a unique style of animation that is different from almost anything else out there. It also feels like a film coming from a genuine place. It was made by Ralph Bakshi and for Ralph Bakshi. He hoped others might tag along, and the gamble paid off in the end. While this is a director who might not be a flawless filmmaker he is a visionary. Wizards shouldn't work because the structure doesn't seem to, but the film has more than enough ambition and ideas to make this a journey worth taking.