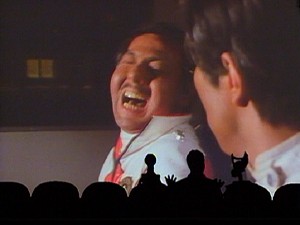 Fugitive Alien
"Hahahahahaha...you're stuck here!"
A alien named Ken ends up stranded on Earth after he is forced to kill his partner instead of killing an innocent woman and child. An alien without a world, he finds a savior in Captain Joe (frequent Seijun Suzuki star Joe Shishido!), who takes him on board his ship despite the objections of the other crew members. The group travels to another planet in an attempt to stop a galactic war, but Ken is captured and the gang must break him out.

The differences between Asian and American culture usually provide an amusing contrast all on their own, but this is a particularly perfect storm of influences: an Asian production, capitalizing on an American phenomenon, imported back to the States and poorly dubbed into English. Cheap sets, exaggerated acting, goofy flashbacks, poor edits, and the movie's unusual score (Joel and the 'bots singing along is the episode's best riff) all provide ample material for a strong episode. Meanwhile, Dr. Forrester and TV's Frank torture TV host Jack Perkins, played by Mike Nelson. 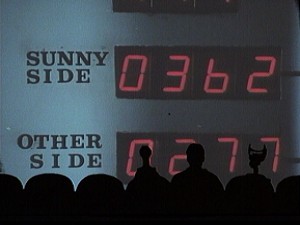 Star Force: Fugitive Alien II
"Bloody Marys all around."
Less effective is this second episode of the Fugitive Alien saga, which basically picks up where the last one left off. Having freed Ken and another political prisoner from an alien planet, Captain Joe and his crew continue their attempts to prevent intergalactic war, but they are confounded by special effects sequences that exist mainly for the sake of putting something more exciting than intergalactic politics on the screen (George Lucas, take note).

The riffs here are mostly just continuations of gags that the gang did in the first Fugitive Alien, right down to singing along with the movie's music. Really, this time around, the film sort of trumps the riffs, with a hilarious battle sequence that blatantly rips off Star Wars, and a higher percentage of ridiculous overacting by the cast. Host sequences are also great, including a soap opera spoof where Joel and Crow have to revive Servo, and a discussion of puppetry (and their symbiotic relationship to man). 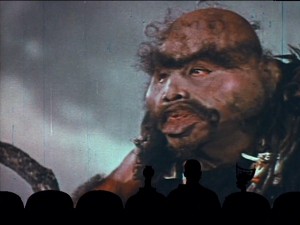 The Sword and the Dragon
"Those are places!"
The story of The Sword and the Dragon is actually so mind-numbing that I can hardly begin to summarize it. A large, Robert Z'Dar-like fellow defeats a wind demon and is hailed as a hero, but a few sniveling weasels get him banished from the kingdom just as a goofy villain prepares for all-out war. Or something like that. During the host segment, Dr. Forrester and TV's Frank get girls for neighbors, and Mike and the 'bots put on a political routine to entertain them.

The film's goofy special effects are the butt of most of the jokes, from the weird forced-perspective stuff that makes the hero tower over everyone else through to the hilariously crappy-looking dragon. The entire sequence with the wind demon, from the moment the hero spots it all the way through to the part where the king throws it in jail is bad-movie gold. I'd also call myself a bit of a curmudgeon when it comes to MST3K's host segments, which are generally more quaintly endearing than actually funny, but "Supercalifragilisticexpiala-wacky!," the musical number the guys do in this episode, is a series highlight. I'm sure "A Joke by Ingmar Bergman" is also a fan favorite. 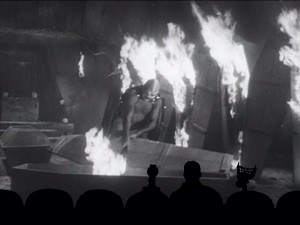 Samson vs. The Vampire Women

"Go El Santo, go El Santo, go El Santo, go!"
Of the four episodes on the box set, Samson vs. the Vampire Women is the best, or at least my favorite. Samson (aka Santo), a Mexican luchador, is called into help a man whose daughter is about to be kidnapped and killed as part of a ridiculous vampire ritual. Meanwhile, during the host segments, Torgo (from "Manos", for the uninitiated, played here by Mike) appears to take TV's Frank to another spiritual plane where lackeys and underlings get to have their day.

Although the featurette included on the disc claims K. Gordon Liddy's English dub is very faithful, it's also hilariously overwritten, with characters spewing five minutes of convoluted lines to explain something that could be conveyed in a few words. (The featurette also mentions that the father is the Mexican President, although I don't remember that coming up in the film, even though the guy has a special video phone on his wall.)

Santo doesn't show up until a third of the way in, with little to no explanation of who he is or why someone (particularly the President) would call him to kill a vampire. He's hilariously ineffective: although his actual wrestling moves are good, he has a hard time using them to actually kill his enemies, one of whom poses as a rival luchador for a seemingly endless ring match (while the other characters sit in a bar doing nothing across town). His eventual success in protecting the would-be victim ultimately relies so heavily on the enemy's poor strategy and so much coincidence that Samson ends up looking like a really lucky failure, which was probably not what the filmmakers had in mind.

Riff-wise, the trio get plenty of mileage out of the father character and the goofy voice of the guy they hired to do the dub, and the drunken acting by the would-be victim. The host segments are decent, although I personally like the Torgo bit better than the set-up or the payoff, if only for Mike's spot-on recreation of Torgo's voice.

The DVD
12 or so sets into their run releasing "Mystery Science Theater 3000," there aren't any surprises when it comes to Shout! Factory's artwork for set XXVI. Four transparent slimline cases are packaged in a slipbox featuring the famous silhouettes, the globe, and the roman numeral as a backdrop. Each slimline case features newly-created illustrations by Steve Vance, and they've even included four DVD-sized "mini-posters" of the same artwork.

The Video and Audio
One thing MST3K fans will never have to worry about: with the exception of The Movie, no HD upgrades are ever going to come along and make the stacks of existing DVDs obsolete. The discs may be less likely to deteriorate, colors might be a touch more stable, they save space, and you get bonus features, but in terms of A/V quality, these 1.33:1 full frame presentations often can't hide that they're culled from decade-old tape masters of a show that was shot on the cheap and played prints of films that had their own visual and aural anomalies. The Joel episodes look worse than the Mike episodes: dot crawl can be seen during the opening credits, and the masking for the silhouettes is blatantly obvious (which ends before the edge of the frame). The Mike episodes are more stable, and both generations have that analog fuzziness and appear to be interlaced. 2.0 audio is also dated but adequate -- all you really need out of an MST3K audio track is some separation from the riffs and the film audio, which the track is capable of handling. No subtitles or closed captioning is available on the discs. 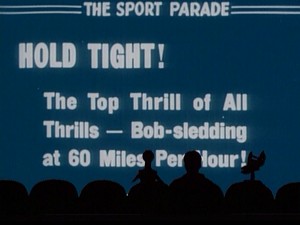 The Extras
Each disc in the set comes with its own extras, which are generally episode-specific.

Fugitive Alien
An "Introduction by August Rangone" (6:19) is a short interview with the author of Eiji Tusburaya: Master of Monsters, whofills in a little of the history behind the making of Fugitive Alien and its trip across the ocean. Three "MST Hour Wraps" (5:04) with Mike Nelson as Jack Perkins are also included.

Star Force: Fugitive Alien II
The most substantial of the extras is included here: "You Asked For It: Sandy Frank Speaks!" (25:29) sits down with the famous film producer who would end up being responsible for quite a few imported "MST3K" targets. For years, many of the episodes featuring films produced by Sandy Frank were unavailable, and a rumor persisted that he was unhappy to be a target of some of the show's gags, but his participation in the extras (not to mention the availability of all Sandy Frank productions in these box sets, particularly the "Mystery Science Theater 3000 vs. Gamera" set) reveals there's no bad blood between the producer and Best Brains. The extra itself is a bit on the dry side, but I'm sure fans will enjoy learning more about Frank and his history in the film business.

The Sword and the Dragon
The one disc without episode-specific extras. Here, we get two shorts (one Joel and one Mike): "Snow Thrills" (9:26), which documents the horror of winter sporting ("I did it for the kicks, man! Snow thrills!"), and "A Date With Your Family" (9:57), which is just as culturally and socially relevant now as it was when it was made back in the Dark Ages ("At least I have two sons").

Samson vs. The Vampire Women
The character of Santo / Samson gets explored in "Lucha Gringo: K. Gordon Murray Meets Santo" (11:20). This little featurette is decently informative, but has a tendency to repeat information already covered thanks to its insistence on splitting itself into several sections. There's also an original TV spot (0:59) for the film itself, which is a nice vintage find. The extras for this four-disc set conclude with "Life AFter "MST3K": Frank Conniff" (11:32), which is a pleasant but slightly dry interview with TV's Frank about his resume following his farewell.

All four of the discs also feature really clever, nicely-animated CG menus, which borrow riffs from the episode to create little sketches involving Servo and Crow.

Conclusion
One great episode, two very good ones, and one mediocre episode. I generally end up with the single "MST3K" DVDs vs. the box sets, but I'm going to guess that the above ratio is the norm for these four-movie boxes. Recommended.