Admittedly, the most entertaining things about Black Briefs, a collection of gay-themed short films with a sinister edge, are the DVD's title and packaging. Shorts collections like this are usually a mixed bag, and this disc from Guest House Films is no exception. On the other hand, they do offer an opportunity to catch up-and-coming directors and actors in projects that take more creative risks than most feature films. While the selections on Black Briefs err towards the average (and, surprisingly, the not very sexy), there's enough variety and genuine suspense present to sustain the interest of most viewers over the course of its 90-minute running time.

The six short films presented on Black Briefs are as follows: 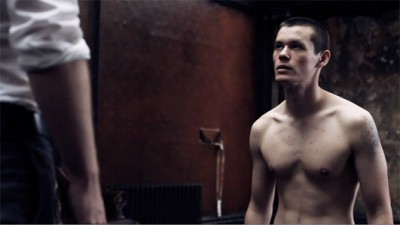 In this film from Cambodian-born writer/director Hon Khaou, two British men (Jonathan Keane and Christopher O'Donnell) meet on a date and discuss the parameters of the kinky-sex tryst they are about to share. Mild bondage and dom/sub play acting are the order of the day once the men return to the privacy of Keane's apartment, but things get out of hand when O'Donnell comes to realize his partner's sadistic games are anything but playful. Khaou's beautifully shot film delves into edgy territory that isn't usually touched upon (even in gay-oriented films), but the characters are sketchily drawn in a story that doesn't come to any satisfying conclusion. Amusingly, the film uses the same set where Colin Firth and Geoffrey Rush practiced diphthongs in The King's Speech. 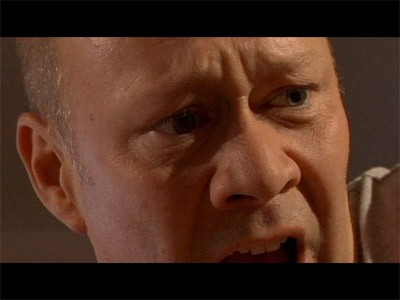 At a remote country house, a cancer-afflicted man (Michael Fitzpatrick) communicates with his lover while awaiting the results of his latest biopsy. The well-appointed home appears to be a perfect retreat, but dread starts to set in when the man comes to realize he isn't alone. Director Greg Ivan Smith does well with a small cast (two actors and one adorable dog) and the sun-dappled country estate setting is an offbeat choice. The film pokes along endlessly, however, and despite the copious gore that eventually shows up the film is actually tame and forgettable. 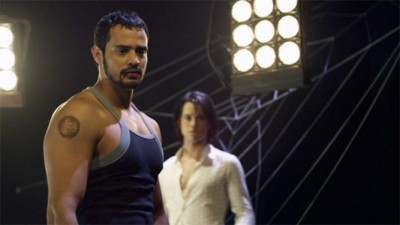 Things take on a more lightweight tone with this violent comedy. The plot concerns a manipulative, slutty young man named Ryker (Gavyn Michaels) who invites his two lovers to partake in a unique theatre experience where they end up being the main players. Sensitive musician Brian (Hunter Lee Hughes, who also wrote the script) and hunky boxer Ernesto (Adrian Quinonez) must literally fight each other to win Ryker's heart in a competition officiated by Ryker's mousy friend Simon (Alec Mapa). Reminiscent of the Eating Out films, Winner serves as a fun, campy detour from this otherwise very earnest program. While the acting and direction are strictly okay, overall the short is a hoot. 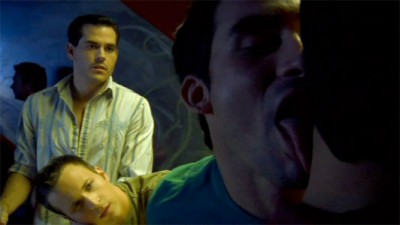 It's Los Angeles in 2008, and long-term couple Chris (Rick Cornette) and Stu (Korken Alexander) are about to get married. On the morning after their last wild night together as singles, the couple's bond gets tested when Stu flagrantly breaks the boundaries of their open relationship. With lots of intense scenes of conflict between the two lead actors, this one plays a bit like a college acting exercise caught on video. The film is powerfully done, with many memorably intense moments, however. Director Lalo Vasquez does a lot of crafty things with the story jumping back and forward in time, and the two leads have an appealingly realness as a couple who love each other too much to put up with silly games. 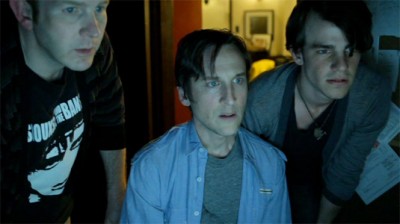 An interesting exercise in Paranormal Activity-style video vérité, this short follows a trio of friends filming a small-budget campy comedy in their home. Taking a break between scenes, they don't realize that they left the camera running. While going over the footage they just shot, a bone-chilling revelation comes over them and transforms the mood in the house. While the material doesn't delve into anything new, the film is quite cleverly made with some genuinely terrifying moments (I also liked how its tone turned on a dime from laughter to terror). This one scores on what Spring and Remission merely attempted to do. 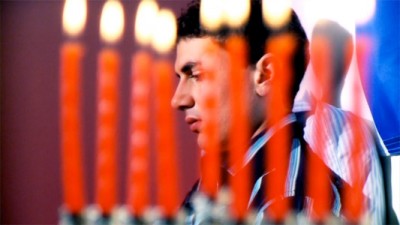 This low-key British short concerns a young man named Jacob (Rudi Vodavonich), an Orhtodox Jewish student who once embarked on a relationship with Andrew (Alexander Campbell), the older mentor at his school. Returning to the man's home after a long absence, Jacob finds out things he never realized about the nature of their breakup and Andrew's obnoxious partner, Charles (Richard Lambeth), a musician whose desire to rekindle the relationship he once had with Andrew drove a wedge between the older gentleman and Jacob. This film seemed like pure, bland soap opera, and the only film on Black Briefs that completely misfired. Although the performers are sincere, their characters are shallowly written types which are hard to find any empathy with. I also didn't get the significance of the lead character being Jewish. Other than dealing with a dour subject, the film isn't too black - if anything, it's a wimpy shade of beige.

Guest House Films' Black Briefs DVD comes in a standard keep case with a paper insert that lists synopses, credits, awards, and running times for all six films (in addition to promos for other Guest House products).

The DVD presentation of these films varies from title to title. All six shorts are shown in anamorphic widescreen except for Remission, which has its 16x9 image letterboxed in Full Frame format. Sumptuously filmed Spring boasts the best quality image, on par with most feature films. The others have decent-looking images consistent with indie filmmaking shot on digital equipment.

Black Briefs' six shorts explore the darker side of gay male life in ways that range from chilling to dull. This critic found something worthwhile in three of the films (Winner Take All, Promise and Video Night), while the rest counted as intriguing yet forgettable exercises. Rent It.