Looney Tunes Show: There Goes the Neighborhood, The 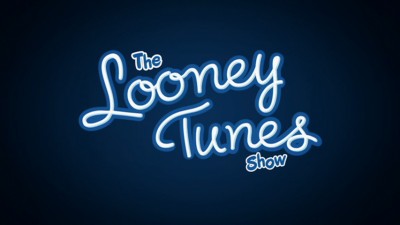 
The Story So Far
Cartoon Network has taken another shot at refreshing the classic Looney Tunes cartoon characters for a new generation, and the result in The Looney Tunes Show, which takes Bugs Bunny, Daffy Duck and friends (including a few newcomers) and puts them into a sitcom format. The revamp, which offers Looney Tunes with a TV-PG rating for the first time, has struck a chord with viewers, as the ratings have been solid, and there have been three four-episode DVD releases to date, capturing the first 12 episodes of the show's first season.

The Show
The last time someone tried to reboot the Looney Tunes, we ended up with Loonatics, which belonged on the Poochie pile for trying way too hard to make legendary comedic characters hip. The less thought about those anime-inspired messes the better. Fortunately, trying to recapture the magic of the Looney Tunes is not a guaranteed failure, as the amazing Animaniacs and the rather enjoyable Tiny Toon Adventures both proved. Of course, Steven Spielberg was behind those series, which doesn't hurt.

Instead of starting over with updated characters, The Looney Tunes Show mainly kept the characters the same, and used character designs inspired by the originals, but brought them into the present. There was one major change though, and that was dropping the shorts concept for episode-length sitcom-style plots, built around the concept of Bugs Bunny and Daffy Duck being housemates (sort of like The Odd Couple.) Instead of breaking up a show into several smaller stories, you have a story about Daffy's snoring keeping Bugs awake at night, with B plots of Daffy getting plastic surgery and Bugs ruining Porky's life at his job. The main stories focus on Daffy, Bugs and Porky, with a touch of other familiar characters, including Sylvester and Tweety, Yosemite Sam and, surprisingly, Speedy Gonzales (with voice provided by Fred Armisen), who runs the pizza place PizzArriba!

There are two concessions to younger viewers, in the form of Lola and Gina, distaff versions of Bugs and Daffy, who are their girlfriends. While Gina seems to be a New Jersey native, complete with accent and attitude, Lola is a complete ditz, unable to maintain a consistent conversation or not frequently annoy Bugs. Given voice by Kristen Wiig, she's not unlike a amalgam of Wiig's many manic SNL characters, but as a cartoon, it's just simply funnier. Thinking back about these 14 episodes, most of the memorable moments, be it in DMV, where Lola is trying to get her driver's license, or her role as Speedy's interior decorator in The Shelf, star Bugs' sweetie. That's not to say the other characters don't have their moments (Bugs' energy drink-fueled freak-out is especially fun) but Lola grabs the spotlight and refuses to let go. 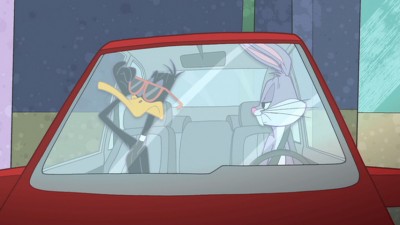 That includes her song "President's Day," a hilarious paean to the fictional leaders of America, like President Wesley Snipes and President Scarlett Johansson, and the closest this series comes to the wacky genius of Animaniacs. It's one of many Merrie Melody shorts inserted in the episodes, featuring original songs sung by a variety of characters, including Pepe Le Pew and twin gophers Mac and Tosh (who have been given a bit more obvious push in the direction of a certain orientation.) The three bits from the entire set that are better than the rest, are all Merrie Melody songs, including Lola's tune, Speedy's SNL-worthy restaurant jingle (which gets progressively stranger) and an epic prog-rock song about Daffy the Wizard, which attaches intense power to everyday behavior. Admittedly, songs are more easily memorable, but these are very well done.

What doesn't work are the frequent Wile E. Coyote and Road Runner shorts tagged on before the end of the main stories. Presented in CGI, unlike the show's traditional animation style, these bits go to the well way too many times to work. Somehow, the writers managed to find a bunch of different ways for the Coyote to chase and attempt to capture his nemesis, but after five or six times, it just loses its zing. Fortunately, late in the season, it seems like they caught on and cut back severely on them, and the results were certainly positive. The animation didn't help, as the new depth placed on the characters just doesn't result in the same feeling for these characters. After decades in two dimensions, perhaps they have all the depth they need. 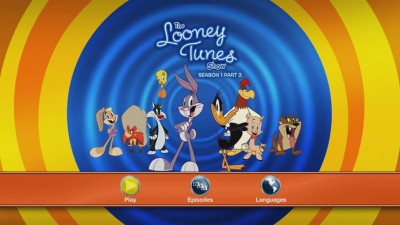 The Discs
The 14 first-season episodes not previously-released on DVD are split between two discs, which are packed into a standard keepcase with a tray for the second disc. The discs feature static anamorphic widescreen menus with options to play the shows, select episodes and adjust languages. Audio options include English, Spanish and Portuguese Dolby Digital 2.0 track, while subtitles are available in English SDH, French and Portuguese.

The Quality
The anamorphic widescreen transfers look tremendous, with great clarity and fine detail, which helps show off the splatter backgrounds that give texture to otherwise flat animation. There are no notable issues with digital artifacts or pixelation along outlines, and the color is bright and vivid, as appropriate for a Looney Tunes cartoon. Overall, a fine image, with no problems.

The audio is presented with Dolby Digital 2.0 tracks that offer clean, center-balanced audio and strong music that is basically what you'd expect from a cable cartoon. Everything sounds good, with no issues with distortion, but these days, it takes much more to impress.

The Extras
The only extras included are a pair of trailers, one for Scooby-Doo and one for DC Comic's youth animation. Where they are, I don't know. Somehow I arrived at a menu for them, but I can't recreate it. 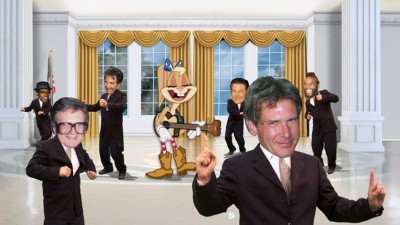 The Bottom Line
Adapting the Looney Tunes into the sitcom format was an interesting choice, and one that's paid off in a series that pays homage to the original, while bringing the characters up to date for audiences without a lifetime of familiarity. Considering how hard a task it is to keep a classic fresh and not turn off old fans and new viewers, this accomplishment is impressive. The DVD looks and sounds fine, and offers no extras, but at least they stopped with the four-episode collections.