PBS // Unrated // July 17, 2012
List Price: $29.99 [Buy now and save at Amazon]
Review by Stuart Galbraith IV | posted August 2, 2012 | E-mail the Author
As documentaries of entertainment personalities go, Johnny Carson - King of Late Night (2012) is just about perfect. In a little under two hours, it traces the talk show icon's personal life and professional career frankly, informatively, and entertainingly. Although it does include some of The Tonight Show's most famous moments - Ed Ames's infamous tomahawk throw (and Carson's ad-libbed response) for instance, and the on-air wedding of Tiny Tim and Miss Vicki - mostly it tries and largely succeeds, insofar as such a thing is possible, to get inside the head of the enigmatic, circumspect entertainer, a man whose emotionally distant, isolated life off-camera so contrasted the intimate, personal relationship his viewers, total strangers, felt toward him. As writer Al Jean puts it, Johnny Carson was television's Charles Foster Kane. But what was his Rosebud?

PBS's Blu-ray is unusually good. The show itself makes excellent use of the high-def format, this in spite of clips from The Tonight Show and other programs being culled from kinescopes and by today's standards primitive analog tape masters. Supplementing the disc is an excellent collection of extended video interviews. 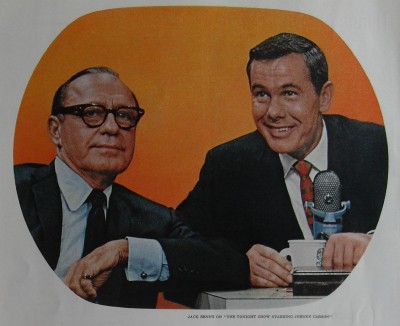 I was lucky enough to see one of the very last tapings of The Tonight Show Starring Johnny Carson, in May 1992, just two weeks before his very last show (an experience I describe in more detail here. It was similar to what Jerry Seinfeld talks about at the beginning of King of Late Night, that being there in the studio was like turning a doorknob, climbing into one's TV and walking right into the show. Experiencing it live was a strange, magical experience, everything wonderful that I'd hoped it'd be. And yet when it ended, it was if a two-ton waterproof hatch had slammed shut. Carson smiled, waved goodbye and abruptly disappeared, never to return. No curtain call, and certainly no palling around with the audience afterward. It felt a little like Willy Wonka's aloof goodbye to Charlie Bucket.

Johnny Carson, as the documentary makes clear, was in some respects just like that. Onstage he exuded warmth and an everyman approachability, but offstage he was an enigma. Writer-producer-director Peter Jones, aided by Carson biographers, friends, fellow comedians, rival talk show hosts (including Joan Rivers and Arsenio Hall), employees, and even an ex-wife (No. 2, the former Joanne Copeland), attribute some of this to his traditional, polite but reserved Midwestern upbringing, and Carson's complicated, painful relationship with his mother.

In this regard it's interesting to compare and contrast Carson with another comedy icon of Carson's generation, comedian Jerry Lewis. Though their comic styles and influences couldn't be more different, their drive and insecurities by all accounts were nearly identical. Lewis had an impossible-to-please father while with Carson his mother served that same, all-deflating function. As with Lewis's father at the height of his son's fame, Carson's mother would think nothing of declaring Johnny unfunny and his monologue terrible. And, of course, for him, hers was the only opinion that mattered.

Winning mother's approval may have fueled Carson's ambitions, but once his version of The Tonight Show all but became The Johnny Carson Show and even just Johnny or Carson for many Americans, Johnny Carson's social awkwardness drove him further and further into an isolated existence off-camera. In effect he became a fabulously wealthy hermit, a king in an empty castle. Although he socialized with people in show business with whom he could relate, once retired the public Carson vanished almost utterly.

The myriad interviewees frequently nail King of Late Night's salient points. One, for instance, perfectly describes Carson's appeal, that he "burned cool" in the coolest of media. (Which also explains Jerry Lewis's disastrous foray into talk-showdom. He burned hot.) Another describes the appeal for audiences of seeing Carson himself entertained by a guest, that his unsolicited, obviously honest delight would reach through the airwaves and be transferred to his audience. I think also many of The Tonight Show's most memorable moments involve catching Carson off-guard, reacting or revealing of himself in ways he rarely ever did, such as his reactions to Bette Midler's serenading him with "One for My Baby (and One More for the Road)" on what would be Carson's penultimate show.

Those recently surprised by Jack Nicholson's tearful expressions of gratitude for producer Roger Corman in the documentary Corman's World will find similarly heartfelt emotions expressed in King of Late Night. Drew Carey all but breaks down recalling his Tonight Show debut and Carson's generous compliments immediately following Carey's stand-up appearance, of Carson inviting him over to "the couch" afterwards and calling him a "funny guy." One small step for man, but a giant leap for a stand-up-kind. Indeed, for comics appearing before Johnny was akin to appearing before Zeus at Mt. Olympus. And there's been nothing remotely like it since.

And Garry Shandling, unsuccessfully holding back tears, movingly describes looking across the bay to Carson's oceanfront home the day he died, Shandling wondering why Carson's death impacted him so profoundly. "I'm not that close to that guy...and yet I was close to that guy." I guess we all were.

Presented in 1.78:1/1080i format, Johnny Carson - King of Late Night strikes just the right balance of wide-ranging clips, including some really amazing artifacts, with talking head interviews and big splashes of color (TV Guide and other magazine covers, for instance). It all looks great. The English 2.0 stereo is excellent for what it is. Optional English subtitles are available, and for a change viewers don't have to wade through a bunch of thank-yous to corporate sponsors to get to the main show.

Supplements include behind-the-scenes footage of narrator Kevin Spacey's recording session. This short featurette seemed to be of zero interest at first, but stick with it as it pays off in the end. Also include are "interview outtakes" with about a dozen of the participants, good little anecdotes that didn't make the final cut.

Anyone who grew up watching The Tonight Show during the Johnny Carson years will want to see this. It's fascinating, funny, touching, and enlightening. Like the song, who could ask for anything more? A DVD Talk Collector Series Title.