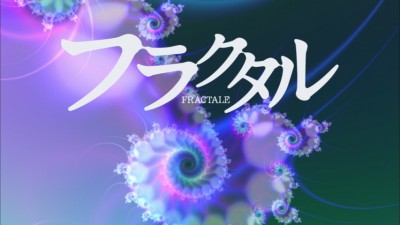 Fractale is another science fiction anime series that doesn't know what kind of show it wants to be and thus it is something that becomes uniformly uneven and confusing with its apparently strong affection for convoluted storytelling and over-the-top scenarios with barely defined characters.  You've seen an incredible amount of series just like it. They might not have been as well-drawn, but the lack of having believable characterization and coherent plot developments is a true staple of a disappointing anime.

The series begins with our lead hero. His name is Clain and he seems to be having some doubts about exactly how things work in the world and within the futuristic Fractale world he has known during his years. He starts to wonder how he fits in with everything else. It isn't long before Clain experiences a entire new world - one that suggests something he never experienced before. A girl starts to fall from the sky (in a bluntly obvious animation nod towards Laputa: Castle in the Sky) and she is a mysterious princess that he must soon help to protect from those searching for her. Not that she's really going to definitively need of much protection. Clain is much more bumbling.

This science-fiction based future world is one in which people use doppels (i.e. as doppelgangers, get it?) that are advanced avatars taking the place of actual human bodies and human experiences. Doppels are a advanced way of society living with less of the problems facing humanity. It removes some hardships, and enhances the "family" unit - according to those who created the system.  In the world of doppels, parents and children don't live together under a single household and families are never together for extended periods. People live alone. Only children are raised in human form before doppels are then utilized. And some new technology suggests that advancements have been made where even kids of society's future-world are being left without the basic realm of humanity and of being a natural kid. 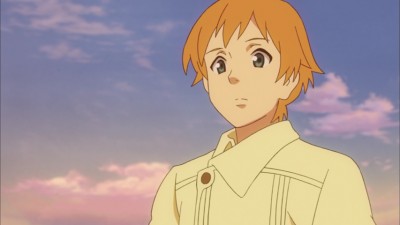 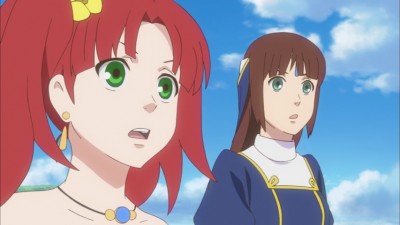 None of that sounds too bad or too convoluted. It's actually a decent setup for what I was hoping to declare a thought-provoking and intelligent science fiction anime. The first episode was actually the most impressive episode of the series. Even with annoying call-backs to one of Miyazaki's best films things seems full of potential and I was excited to see where the story would progress. I was quite pleased with this initial episode because it was slow-paced and despite having an unquestionably ambitious storyline being established it still managed to be an episode about introducing some of Fractale's characters.

The establishment of character, slow-build, and minimalistic storytelling within an ambitious show wasn't something that stayed around for long. The visit was fleeting. Before long, Fractale became another aggravating series where things start happening with no apparent reason within the world already established and the characters begin to run around without any character development. It disappears and is replaced almost entirely by action sequences, ridiculous technological-babblings, increasingly showy animation, and characters that enter the story with no good introductions and placements within the framework of the show.

Convoluted anime series aggravate me more than any other kind of anime series being produced on a regular basis and the reason for that is because you tend to start the series with hope that it might eventually lead towards a satisfying conclusion but it almost always doesn't end on a good note. It descends into an incoherent salad - a blend of ideas that is hastily thrown together and that doesn't taste so good.

Not even the deluxe salad dressing (or in this case, the breathtaking animation) can dress up the way things don't blend well together. There is so little balance and structure to this show and it winds up feeling no different from any other convoluted mess -- and then you wind up wishing you just had a burger with no mayo or ketchup. Just some meat and cheese, because at least then it's simple and satisfying and not a failed salad with too many ingredients. And as beautiful as the animation is (its easily one of the best looking series of the year), Fractale doesn't manage to remove story failings contained within its entire (and brief) eleven episode run.

Sometimes even the biggest health-buff might feel inclined to have a quality hamburger over a poorly made salad... and Fractale is a pretty uneven salad: a bizarre combination of a zillion ideas that don't blend together smoothly and never match the apparent ambitions. 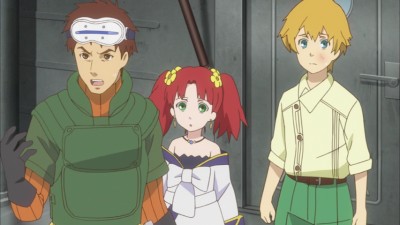 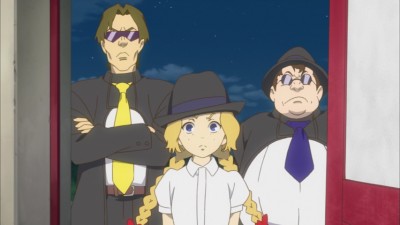 Please Note: This release is a Blu-ray/DVD Combo Pack. The Blu-ray is herein reviewed. The screenshot's utilized in the review are from the DVD edition.

Fractale looks magnificent on Blu-ray. The High Definition image is the perfect way to see the stellar, breathtaking animation. The series is presented with an aspect ratio of 1.78:1 and it's solid for the animation to spread its wings and be a beautiful sight to behold. Fractale looks great. You won't complain about it lacking in visual wonderment. Colors are vivid and detail is surprisingly strong.

The included 5.1 Dolby TrueHD English dub soundtrack is more robust sounding than the 2.0 Dolby TrueHD Japanese version but the better of the dubs is the original Japanese language version. The English dub seemed to take some liberties in making changes to the script that just didn't seem as worthwhile to me. I think viewers would enjoy listening to the Japanese language version more. I watched episodes with both dubs but I had a clear preference for the original version. Either way, experiencing either version offers decent dimensionality and sparkling clarity on the dialogue and luminous musical accompaniments.

The extras aren't that interesting for the most part. Commentaries are included on episodes 1 and 7. t's disappointing that the main inclusion was several promo videos for the series in the form of an Original Preview (:32), Promotional Videos (3:50), DVD and Blu-ray Commercials (1:08), and the U.S. Trailer (2:02).

Fractale's Art Sanctuary is a cool way to view artwork for the show by scrolling through the images.

Lastly, the one really neat bonus is a brief orchestral video of some of the music from Fractale being performed. The Shobi Wind Orchestra, Tokyo (4:52) is exactly that kind of piece and its a rather cool bonus for any orchestral buffs and fans of film and anime music in general. 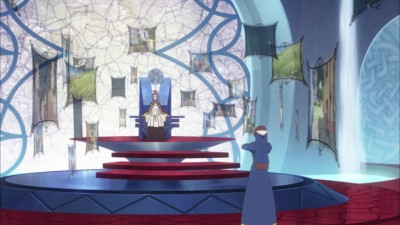 Fractale is a convoluted science fiction series about a society in which people are replacing themselves digitally. If that sounds interesting to you, go ahead, but otherwise you'd be better off with a rental at best. It doesn't help that the characters don't feel well defined and developed. It certainly didn't help contribute to my own interest level.