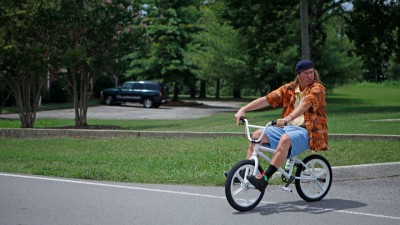 The trouble with anthology films, as I'm well aware many, many others have pointed out, is their inherent tendency towards inconsistency; it's all but guaranteed that there will be a couple of good segments and at least one that stinks, rendering it tough to recommend a film in its entirety. Joe Dante and George Miller's segments of Twilight Zone: The Movie are unforgettable, but you have to sit through that notorious Landis and woeful Spielberg to get to them; there's fun to be had in Rodriguez and Tarantino's sections of Four Rooms, but boy are the other two a drag; the Wong Kar Wai and Steven Soderbergh pieces of Eros are outstanding, but you want to snip out the Antonioni yourself. And so on. This brings us to The Fourth Dimension, which features an odd but engrossing film by Harmony Korine, a fascinating short by Russian filmmaker Alexey Fedorchenko, and a closer by Polish director Jan Kwiecinski that's utterly worthless. So it goes.

The Korine comes first; it's titled "The Lotus Community Workshop," and stars Val Kilmer as Val Kilmer, his long hair tied back, jean shorts and a fanny pack under his considerable paunch. People recognize him ("from the movies, right?"), but now, in his words, "I'm doing a whole, kind of a new thing." That "new thing" is motivational speaking, conveying his "AWESOME SECRETS" to a colorful-looking crew of unemployed misfits in a skating rink. His nonsensical rantings to them ("Velvet killed Elvis!" "I don't have a van, I have a bicycle!" "Heyyyyyyy, cotton candy!") are intercut with his laid-back "date," later in the evening, with a corn-rowed thug girl who's maybe 20, maybe. (She's well played by Korine's wife Rachel.) That's pretty much it. But it's an engaging film--Kilmer is admirably game and fascinatingly weird, and Korine is (for once) willing to just tell a story rather than force-shock us with how "edgy" he is.

Next is the Fedorchenko, titled "Chronoeye," which concerns a scientist (Igor Sergeev) with an interest in time travel. Asked for a ticket on the train, he turns over a slip; when told it's yesterdays ticket, he replies, "But what if your yesterday is my today?" Fair enough. He's working on a device to view historical events on his computer screen, a kind of virtual time travel, but the poor guy just can't get any work done, between the upstairs neighbor's loud and constant dancing and the visits of a bothersome taxman. What's more, he can't make the device work as he wants it to: "I am doomed to see the same thing over and over again," he despairs, that thing being "the narrow viewpoint of an insignificant man." The film meanders a bit much, but it's got some compelling ideas and likably low-fi effects, and the ending is precisely the right mixture of goofy and profound.

The movie should have stopped there, while it was ahead. The Kwiecinski film is called "Fawns," and it finds four young people wandering their small, empty village. "Is everyone gone already?" one asks. "Are we staying?" asks another. We spend some time trying to figure out what happened (a rapture? An apocalypse? Zombies?) before TV news footage reveals that a giant flood is on the way to their evacuated village. They spend the film wandering, poking around, and taking stuff. Trouble is, the short is as aimless as they are, documenting their meandering to little discernable effect. The situation piques our interest initially, but that interest is quickly squandered, particularly by the time one of them disappears, prompting the others to spend the next several minutes running around shouting his name. It is Mickey. You'll learn it too.

All of that leads to an irritating nothing of an ending that's like a poke in the eye to any audience member who has dared to give a shit; this is filmmaking at a remove, and while we certainly aren't going to an experimental international omnibus film looking for answers, we are looking for it to go somewhere or do something. Too bad; before Kwiecinski sinks it, The Fourth Dimension manages to stake out a claim in the all too rare weird-but-watchable territory--and it's worth seeing, if employing a carefully-timed exit.