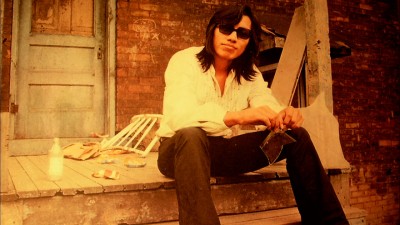 His name was Sixto Rodriguez, though he just went by his surname when he started recording for Sussex Records in 1970. He was from Detroit, and his songs were about poverty, struggling, survival; he was called an "inner-city poet" by one of the three superstar producers who created his two studio albums. He had the right people behind him and a voice perfect for his troubled times, but it somehow didn't click; in spite of rave reviews, his two records didn't sell. His label fired him, and the man they called Rodriguez went back to working construction in Detroit. He faded into obscurity. Sorta.

What happened next is the basis for Searching for Sugar Man, a fascinating new documentary from Swedish filmmaker Malik Bendjelloul. As Bendjelloul explains, somehow a few copies of his two albums made their way overseas, to New Zealand, Australia, and (especially) to apartheid-era South Africa. The line about a musician being "huge in Japan" or "beloved in Taiwan" may be an old joke, but Rodriguez was giant in South Africa; his albums were picked up by local distributors, and he went platinum. His lyrics were particularly embraced by young Afrikaner musicians who spoke out against apartheid in their music, and he became something of a folk hero on the continent. And, because he had always been such a reclusive and enigmatic figure, wild urban legends sprouted about what had become of Rodriguez. Most of them insisted he was dead. Many elaborately described an onstage suicide.

It wasn't until the late 1990s that local music journalists and fans made a serious effort to figure out what had become of Rodriguez. Bendjelloul's retraces the steps of that investigation, step by step, connection by connection, dead ends (like the snippy owner of Rodriguez's label) and all. But it finally came together, a web post here, an email there, a phone call, until suddenly he was on the telephone, and quite surprised to learn that anyone still cared about his music.

Searching for Sugar Man shares that enthusiasm for his old songs--this is a film that loves and respects his music, and plays about as much of it as you can expect a documentary to, both as background and foreground (occasionally accompanied by hauntingly beautiful animations). They're not just making a throwaway point, or exaggerating the quality of his work for dramatic purposes; the bombing of those albums still doesn't make sense, because those songs hold up as well as the best music of that period.

But if that was inexplicable, what happens to Rodriguez after his rediscovery is justice at last: a South African tour, beginning with a giant show for over five thousand screaming fans, for whom it was "like seeing Elvis come back from the dead." The footage of that comeback concert is electrifying; a stadium full of people are just losing their minds for the humble singer/songwriter, who grins, "Thanks for keeping me alive."

"South Africa made me feel like... more than a prince," Rodriguez says now. He's nervous and withdrawn in his interviews for Searching for Sugar Man, quiet and humbled. He has a peculiar double life: a laborer at home, a rock star abroad. He doesn't dwell much on it. He just plays his songs and counts his blessings, and it is a pleasure to spend the 90 minutes of this warm, kind film with him.