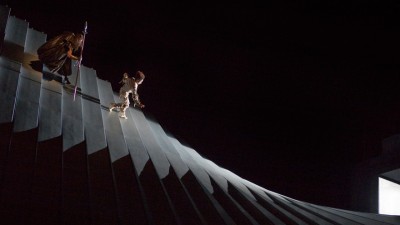 I am not a fan of the opera. Well, correction: I've never been to the opera, so that's probably unfair. Like (I believe it's fair to say) most people of my generation, my impressions of opera are forged from its short and usually less-than-reverential appearances in other media; the idea that it's a fundamentally silly art form for old, rich people, filled with fat ladies singing in horned helmets, grabs you at a fairly early age (never underestimate the impact of What's Opera, Doc) and pretty much holds. Yet, even with my total disinterest in the art at its center, I found myself quite involved and invigorated by Susan Froemke's documentary Wagner's Dream, an up-close look at the Metropolitan Opera's two-year quest to stage Wagner's epic, four-part Ring cyle, a piece considered by many to be unstagable. "The quest to produce a perfect Ring," we're told early on, "remains opera's greatest challenge," and the Met's attempt to conquer that challenge made for high drama both on and off stage.

On its surface, the film is primarily about the problems and logistics of the staging, which was devised by the French-Canadian director/designer Robert Lepage and mostly centered on an elaborate mechanized device of planks and platforms, dubbed "the machine." The set is a technical marvel; it is also a technical nightmare. It was a set so big and unwieldy that the Met's carpenters had to reinforce the building itself when the machine arrived from Quebec, and the tension of hoping it works (as well as the steps taken to make sure it does) provides a surprisingly effective dose of suspense in the first half of the documentary--particularly in its first rest run, as the floorboards creak loudly while the "wagon" carrying the machine crawls across the stage.

But underneath the ostensible topic of the mechanics of the show are greater concerns about the place of opera in the current cultural pantheon--particularly as voiced by the Met's director, Peter Gelb, the process of trying to redefine and rebuild the organization. "In order for opera to move forward," Gelb insists, "it has to be constantly renewing itself." The purists will object ("I really don't understand what they're doing," sniffs one, "but I doubt Wagner would approve"), but there are bigger, fascinating questions here about cultural adaptability and the occasional inflexibility of art.

Beyond those concerns, Wagner's Dream is an enjoyable backstage drama, bringing to vivid life the terror of early technical tests, the thrill of the final dress rehearsal, the electricity of opening night, and the crushing agony of unexpected snags. It's also got some great moments of behind-the-curtain comedy: a gum-chewing tech guy sitting in a throne during cue-to-cue, the flying mermaids sharing war stories. And Froemke finds an ideal focal point for the second half (Lepage is front and center in the first): boisterous and good-humored vocalist Debra Voigt, who fills the leading role of Brünnhilde and is clearly having a great time playing to the documentary cameras.

Wagner's Dream runs a two full, tightly packed hours, and it's a little too much of a good thing; the structure is lopsided, spending over half the running time on the first of the four productions and smashing the last three into the remainder. It's not dull, but it is overlong, and a lot to process (some of the explanation/education of opera itself in the first hour could go). Still, it's a fascinating picture, and there's something to be said for a filmmaker that can wring this much tension of a topic so seemingly dull.