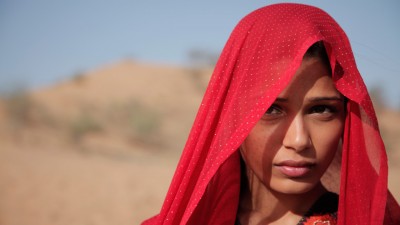 Confession: It was with something less than fevered anticipation that I dragged myself into a morning screening of Trishna, Michael Winterbottom's adaptation of Tess of the d'Urbervilles. There is such a thing as too early in the day for Thomas Hardy, or for film versions of 19th century English literature. I needn't have worried: from the opening scenes, of young guys smoking cigarettes, hanging out, and driving around blasting rock music, this clearly isn't your standard Tess.

And that is a good thing, though it may infuriate the purists. Winterbottom has brought Hardy to the screen before, both faithfully (Jude) and loosely (The Claim); this time, the novel is mostly just a rough suggestion, with Winterbottom (who also wrote) taking a great many liberties with the text in updating the film to present-day India. Tess has become Trishna (Frieda Pinto), a peasant girl in a small Indian village. Angel and Alec have been merged into Jay (Riz Ahmed), the son of a wealthy hotelier who meets her, offers her a job in the city to be close to her, and sets off their complicated, tortured relationship.

The evolution of that relationship provides the arc for the film, with an initial flirtation that is sweet and tentative (even if the way she keeps calling him "sir" is a little weird), moving into loaded glances and unspoken moments (the sly eroticism of his teaching her to whistle is terrific), and culminating in a submission to temptation that goes too far. But the more their courtship contorts, the more unhealthy it becomes; she shares a dark secret with him, in a scene that's like watching slow-motion car accident, and it slowly becomes clear that Jay is either a jerk, a brat, or both. But we see that aspect of his character in actions rather than words--a cinematic choice that is strangely rare in cinema itself. When she is subsequently expected to take on an explicitly subservient role in their relationship, it becomes clear what a pig he is, but the script adroitly hints at that capability all along.

That's a good performance; so is Pinto's, which is something of a decathlon (or, more accurately, an obstacle course) for the young actor. She must spend giant sections of the film hiding how she feels, but she's attuned enough to the subtleties the motion picture camera can detect to establish a relationship with the audience and keep them keyed in to her. There are shots where the camera just lingers on her face, and you can't blame it, but there's always something going on behind those eyes, and the way all of her bottled rage and fury and shame explode at the story's end is a marvel to behold.

Winterbottom has some trouble conveying certain subtextual elements. It seems that we're to understand the pair must hide their relationship in certain circumstances due to class (I guess?), particularly in specific locations--when they go to Bombay, Jay says "Nobody cares if we're together there," but when they must return to a more provincial locale, he tells her they can be together in private, but "in public we'd..." and then he just trails off. Kudos to the writer/director for wanting to avoid the clunky, explicit explanation of what keeps them apart, but a couple more hints would have been welcome.

For a classic story with tragic underpinnings, Trishna boasts good humor and a free-wheeling spirit; Winterbottom appears to have taken its pulse from the setting and its vibrant music. The picture has a loose and open energy, and if its sad conclusion is inevitable, the journey to it is remarkably life-affirming and enjoyable.