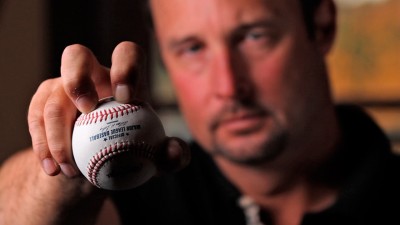 It would be fair to say that the knuckleball is not the most respected pitch in baseball. Some call it a trick pitch, a distrusted tool of oddballs, and indeed, there are only two knuckleballers in the majors as the 2011 season begins: Tim Wakefield of the Boston Red Sox and R.A. Dickey of the New York Mets. Ricki Stern and Anne Sundberg's documentary Knuckleball! takes a look at those two men, their season, and the history of this very patient pitch.

Though they both throw in the distinctive style--which one historian estimates has only been used by 70 to 80 players in major league history--their backgrounds are vastly different. Wakefield is the oldest player in the league (going on 45) and has spent an astonishing 17 seasons with the Sox. Dickey, in sharp contrast, is a journeyman player who came off of 14 one-year non-guaranteed contracts with different teams before landing with the Mets, where he came on as a roster-filler but became unexpectedly valuable. Both men enter the 2011 season with something at stake: this could be Wakefield's last season, and he's within striking distance of winning his 200th career game, while Dickey, newly signed to his first guaranteed contract with the Mets, wants to prove that he's the real deal.

Those goals provide an ideal framework for Stern and Sundberg, who use them as the jumping-off point for telling the stories of not only those men, but the pitch itself. The handful of knuckleballers that are still around hang out with each other and mentor Wakefield and Dickey, creating a kind of us-against-them club; some of the film's best scenes are these young(ish) guys hanging out with old timers like Charlie Hough and Phil Niekro, talking shop and getting tips. And they look at the inevitable difficulties of involving the pitch in team strategy, from the trust and indulgence it requires of a manager to the improvisation it can call for from a catcher.

There's quite a bit of game footage (the film was made with the cooperation of MLB), though effort must be made to make it exciting--after all, if these pitchers are doing their job, they're striking guys out, which is not the most cinematic element of a ball game. The filmmakers (and editor Pax Wassermann) do their best, keeping the pacing tight, the music dramatic, and the slo-mos plentiful.

Stern and Sundberg previously directed Joan Rivers: A Piece of Work, one of my favorite recent documentaries, and this film is not up to that one--we don't really get the sense of knowing these guys the way we did that film's open-book subject, and though it's only 90 minutes, it feels a little flabby (some judicious trimming and the would've made a good, tight hour-long doc of the 30 for 30 school). But the history is fascinating, the protagonists are likable, and there's some genuine emotion in its concluding sections. Knuckleball! may not measure up to its creators' previous work, or the many great sports docs that we've seen over the last couple of years, but fans will enjoy it, and causal observers (like this one) will find plenty to engage with.