Irrelevance...this is Superman's primary foe in the latest animated DCU release. It doesn't much matter if he can leap tall buildings in a single bound if no one is around to care. Joe Kelly, expertly adapting his own work in Action Comics #775 (What's So Funny About Truth, Justice and the American Way?), has given us a compelling tale set in a comic book universe with problems that bleed through the barrier between fiction and reality. 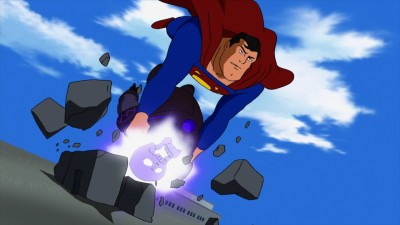 The movie starts in high-octane fashion with a knock-down drag-out brawl between Superman (George Newbern) and The Atomic Skull (Dee Bradley Baker). You see, the Skull was vaporizing innocent bystanders in a bid to draw out his real target, Big Blue himself. Superman doesn't take kindly to this and the fight ends with the Skull in custody. Superman's clenched fists speak of a restraint that allowed the Skull to squeak by with his life. If he had been up against someone with a more flexible moral code, he may not have been so lucky. This is where the Elite come into the picture. 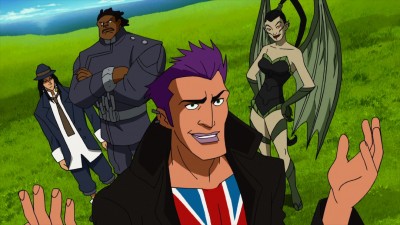 Led by Manchester Black (Robin Atkin Downes), a ticked off Brit with telekinetic powers, the Elite are a group of brash, young superheroes who simply want to solve the world's problems...by any means necessary. Along with Black, the group consists of Coldcast (Catero Colbert), with his ability to produce and absorb bursts of energy, Menagerie (Melissa Disney), with her symbiotic creepy crawlies that can be deployed at will and the Hat (Andrew Kishino), a drunken sorcerer who can conjure up some real damage when he's sober enough to pay attention.

When the Elite first appear on the scene, Superman doesn't know what to make of them. They prove to be invaluable in a couple of tight spots and are eager to please. Unfortunately things turn sour when Superman realizes just how aggressive the Elite can be. For them, violence is always an option and they are not above outright murder of terrorists and other unsavory types, if they think it will get results. While Superman stands strong with his moral code, he seems to be alone in his corner. These are savage times and the world likes what the Elite has to offer. It is up to Superman to accept his new status as a relic of the past or persevere and demonstrate that morality doesn't have to be considered weakness. 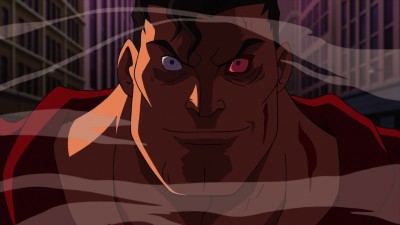 It struck me early on and once I noticed it, I couldn't ignore it. This is one angry movie. There is a palpable sense of rage that bubbles just under the surface, sometimes erupting quite unexpectedly. This is not surprising given the parallels that are drawn to the very real world we live in. When Manchester refers to 'boogeymen who knock down skyscrapers' he is peeling back the scab of 9/11 and pouring salt in the wound. He (and through him, Joe Kelly) is tapping into the violation we all felt and reminding us that under the right circumstances, perfectly reasonable people become blood-thirsty instruments of revenge. To Kelly's credit, he doesn't present this as a black-and-white issue. When Lois (Pauley Perrette) mentions that the Elite aren't completely wrong, Clark is taken aback but we are not. As the audience surrogate, she is merely saying what we may not be willing to admit.

Similarly, Superman's moral stance comes with a heavy cost. His actions while consistent and correct sometimes lead to unacceptable collateral damage. When he openly wonders if the world has indeed moved on, the moment is shocking not just because he is conflicted; he may actually be right. These are weighty questions that are resolved in spectacular fashion with a climax that is both action-packed and thought-provoking. This blend is actually true of the entire film. Kelly finds a wonderful balance between getting his point across and getting our blood pumping. Set-pieces are presented with regularity but never distract by being too showy or far removed from the proceedings.

The voice acting is excellent across the board but there are definitely a few stand outs. Pauley Perette lends Lois Lane a sassy likeability that is reminiscent of Margot Kidder. We get exactly why Lois and Clark are a couple. Robin Atkin Downes also nails the roguish aspect of Manchester Black which makes him such a wild card. George Newbern is gentler as the man of steel but is convincing during the hard-edged transformation of the climax. Other than an out-of-place opening credit sequence, nothing about this production really rubbed me the wrong way. Much like Batman: Under the Red Hood, I found this piece really tapped in to the core of the lead character's appeal. It is a solid bit of storytelling that will surely please any Superman fans out there.

Packaging:
The release is offered as a combo pack including a Blu-ray and a DVD along with the option to instantly stream or download via Ultraviolet. Both discs are contained in a standard width Blu-ray case which in turn sports an attractive slipcase with embossed elements duplicating the cover art.

Video:
The film is presented in a 1.78:1 aspect ratio with a 1080p AVC encode that is quite fetching indeed. Colors pop off the screen but remain crisp throughout. This is a fairly dark story (thematically and visually) so it is reassuring to see black levels that are inky and uncompromised. Kinetic elements deliver quite an impact in action scenes that offer fluid and detailed motion. Slight jitter due to aliasing pops up in a few patterns along with the occasional soft shot but neither issue is distracting enough to hobble the production. The transfer is more than up to the challenge of conveying the interesting animation style of 'broadly cartoony meets angular anime'.

Audio:
The DTS-HD Master Audio 5.1 Dolby Digital track is aggressive and impressive in equal measure. For all my talk of introspection and quiet moments of paralyzing doubt, this film is still packed to the gills with slam-bang larger than life action. We're talking about superheroes battling other superheroes in locations as varied as city blocks to outer space. As you can imagine, much damage is inflicted and all of it comes through with clarity and presence. Spatial balance is excellent while the bass rumble is vigorous as ever. Fortunately dialogue remains audible and expressive throughout. This isn't a subtle audio track and it isn't meant to be one. Optional English, French and Spanish subtitles are available along with matching audio tracks.

Extras:
First up, we have an Audio Commentary featuring writer Joe Kelly and DC Comics Executive Editor Eddie Berganza. This is an informative but relaxed track as both speakers have a playful relationship that comes across to the listener. Joe discusses his love for dark books and how that informed his work on Action Comics #775 (which provided the inspiration for this film). Joe and Eddie also discuss all the changes that had to be made to the source material during the adaptation process. This is not surprising given just how violent and aggressive the comic book got at times. Joe also mentions the anger that is present throughout the story and draws connections to the exaggerated character designs. Altogether this is an incisive look at the creative process and how certain elements translate during an adaptation for a wider audience.

The Elite Unbound: No Rules, No Mercy (15 min.; HD) is a featurette dedicated to Joe Kelly's original vision for his comic book and how the characters changed during the adaptation process. An interview with Joe Kelly shows him drawing inspiration from the deeply flawed characters of Warren Ellis' The Authority. He goes down the list of all the members of the Elite and describes their specific powers and backgrounds.

Superman and the Moral Debate (17 min.; HD) takes on the tough task of providing context for the central dilemma that Superman faces in this tale. Joe Kelly along with a host of experts including social psychologists and law professors give us their take on the question of taking a moral stand only when it is convenient. The 9/11 connection is made explicit while it becomes clear that there is no easy answer; just a shift in perspective.

Alan Burnett's Top Picks (42 min.; SD) gives us 2 episodes of Superman: The Animated Series while Action Comics #775 lays out a few panels from the comic book that inspired this film. A Photo Gallery for the upcoming theatrical release for Dark Knight Rises is exactly what it sounds like.

We close things out with 3 Sneak Peeks for Batman: The Dark Knight Returns, Part 1 (13 min.; HD), All-Star Superman (11 min.; HD) and Superman / Batman: Public Enemies (8 min.; HD). Each making-of piece gives us a little insight into the production of the films including interviews with Bruce Timm and other members of the cast and crew. I imagine the one for the upcoming release of the first half of The Dark Knight Returns will be of most interest to fans. Besides offering storyboards from the film, we get a look at Peter Weller in character as the aging Batman.

FINAL THOUGHTS:
Forgive my food obsession but Superman vs. The Elite is a complete meal. It dazzles the palate with plenty of high-octane action while offering serious substance to chew on. Weighty ethical matters are tackled as morality collides with reality. Writer Joe Kelly has adapted his own classic Action Comics issue and turned out a film that really cuts to the core of what makes Superman special and still very much relevant. Highly Recommended.