Please Note: The stills used here are taken from earlier DVD releases of these cartoons, not the Blu-ray edition under review. 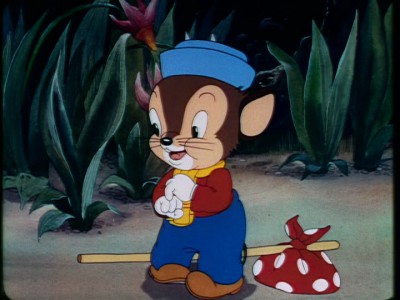 Hey, any collection of cartoons that opens with a little mouse getting drunk with an electric shaver is all right by me. I'm not making that up. It actually happens. So hilariously surreal!

I suppose there have been less cohesive themes for a cartoon collection than Looney Tunes Mouse Chronicles: The Chuck Jones Collection. The main program is, indeed, a gathering of Looney Tunes directed by Chuck Jones that feature mice. Specifically, twelve short cartoons starring the overly cute, sometimes dull, always childish mouse Sniffles and seven more starring the devilish duo of Hubie and Bertie. Smartly, these two sides of the humor spectrum are split over two Blu-Ray discs so that you won't get your treacle mixed in with your oh-so-yummy sour candy.

Sniffles is actually a character I have fond memories of. I don't exactly know why I liked him when I was a kid. Maybe it was just that, for a lot of his cartoons, he is an adventurous underdog. Jones directed the Sniffles cartoons rather briskly, averaging about two a year between 1939 and 1946. The character evolves over the course of the series, going from being a kind of empty children's entertainment cliché to a well-meaning mischief-maker, finally ending up as a motor-mouthed, oblivious pest of the classic Looney Tunes variety. The early shorts quickly recycle plots--Sniffles amongst living book characters, Sniffles stealing an owl's egg, and Sniffles versus a cat being the three basic storylines--and pair the mouse with a little worm as a sidekick. The owl villain of "Little Brother Rat" (1939) and "The Egg Collector" (1940) works best. The smug, erudite stereotype lecturing the poor, misguided rodent ends up being pretty funny. The straight-up cute "Bedtime for Sniffles" from the same year, which is focused entirely on Sniffles trying to stay awake for Santa's arrival, is probably the only real dud in the bunch. Nothing much happens, and the gags are flat.

Things start to take a turn for the better with 1941's "The Brave Little Bat," in which the mouse teams up with a mouse-sized bat to fight a cat. It's actually the bat character that provides the template for Sniffles' new personality: he never shuts up, clueless to his own chattering (a bit like Friz Freleng's Little Blabbermouse, who shows up in the bonus section). This paves the way for 1943's "The Unbearable Bear," which not only steps once and for all over the line into gag-based humor, but also shows Jones' more stylized animation coming to the fore. Abstract backgrounds and funnier character designs make Sniffles' joint encounter with the mom and dad of the Three Bears and a thieving fox dazzle in a far more energetic manner than previously. Sniffles is now more of an accidental agent of chaos rather than the lead character. This is maintained in the last two Sniffles cartoons, "Lost and Foundling" (1944) and "Hush My Mouse" (1946).

Hubie and Bertie debuted as the Sniffles franchise was evolving and, ultimately, running its course. The pair first appeared in 1943's "The Aristo-Cat," a funny cartoon about a cat who inherits a fortune, only to be terrorized by two meddlesome mice. This short leads the second disc, and it pretty much sets up the Hubie and Bertie formula. Hubie is the pushy streetwise type, and Bertie is his accomplice, and they mess with helpless cats, giant bulldogs, and Porky Pig alike ("Trap Happy Porky"). The humor gets dark and mean, which definitely appeals to me. In "The Hypo-Chondri Cat," for instance, they convince a disease fearing housecat he's going to die. And has there ever been another cartoon about mass suicide like the final Hubie and Bertie, 1951's "Cheese Chasers"? The duo has gotten themselves so drunk on cheese, they try to make a cat eat them. He gets freaked out, and so the feline tries to get a dog to eat them. The dog freaks out, and so it goes. It's hysterical. The half-dozen Hubie and Bertie cartoons, about half of which I don't think have been on disc before, make this set worth it. I wish they had made more of them.

The collection is rounded out by eleven more cartoons, all featuring mice, most of them not connected. Chuck Jones only directed one (1952's "Mouse-Warming"), most of the selections are from the Friz Freleng oeuvre, including 1965's Speedy Gonzales/Daffy Duck vehicle, "It's Nice to Have a Mouse Around the House." This and 1967's "Merlin the Magic Mouse" represent latter-day Looney Tunes, and in terms of drawing style, really stand apart. The earlier pieces are of the more tame variety (1935's Freleng-directed "Country Mouse" is all about a hick mouse going to the city, trying to be a boxer, and getting bailed out by his way tougher mother; 1938's "The Mice Will Play," directed by Tex Avery, is a harmless parody of melodramas, complete with a mustachioed feline villain), but they do show the growth curve of the Warner style. Jones steals his own set back. "Mouse-Warming" has an excellent set-up: a new mouse family moves into the vacant hole in the wall, and the teenage boy in the hole across the way has to get past the cat to get to the cute new neighbor girl. It's fast-paced and fun. 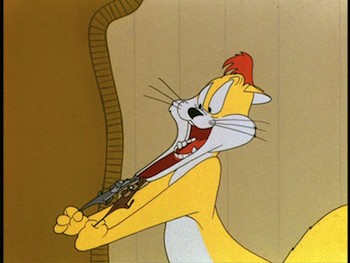 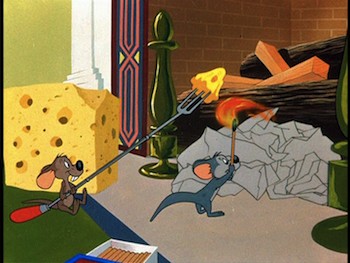 Video:
I have to admit, I didn't know what to expect from seeing any Looney Tunes on Blu-Ray, and I am still at a loss for entirely how to judge them. These are all cartoons that I have seen in various iterations throughout the last four decades. Somewhere, I still have a snapshot of Sniffles in "The Brave Little Bat" taken off my family's giant tube television back when I was experimenting with my first camera. There is always going to be a challenge of balancing how these things look in my memory versus, well, how they look right in front of me.

Do the cartoons on Looney Tunes Mouse Chronicles: The Chuck Jones Collection look as good as, say, a restoration of a major Disney feature film? No, not nearly, but then, the production levels were likely never the same either. Do the cartoons look clear and clean, with vibrant colors and sharp resolution? Absolutely. I would say, actually, the best thing about the transfers here are they aren't too clear, we don't lose the illusion of the animation. There is a nice grain that maybe softens some of the glassy look of the cells or the strokes of the paint brush that have become apparent over time (i.e. you're seeing the actual material in both cases). There is no real pixilation or blocking or even just general print damage that could otherwise mar a release of this kind (you can see that stuff on the extras, if you want to compare). To my eye, Looney Tunes Mouse Chronicles: The Chuck Jones Collection's programming is probably as good as these cartoons have ever been; also, as far as I know (and this is always dangerous ground for a WB archival release), these are all the complete cuts with the right soundtracks, etc., including some restored title cards. If I hear otherwise, I will update the review.

Sound:
The original soundtracks get a Dolby mono mix and sound fantastic. The music, dialogue and sound effects all ring with clarity and balance. I had vivid childhood flashbacks when I heard the sound that toy duck makes when it chases Sniffles. It haunts me still!

There are also two Spanish mixes, Castilian and Latin, both in mono. Available subtitles are for all language tracks, including English SDH.

Extras:
The two-disc set is packaged in a standard Blu-Ray case with an outer slipcover featuring a cute design and embossed artwork. 19 cartoons plus 11 more bonus selections are spread over the discs, as are extras. My only complaint is there is no printed list of contents anywhere on the package.

Disc 1 is all the Sniffles cartoons, twelve in all: Naughty but Mice * Little Brother Rat * Sniffles and the Bookworm * Sniffles Takes a Trip * The Egg Collector * Bedtime for Sniffles * Sniffles Bells the Cat * Toy Trouble * The Brave Little Bat * The Unbearable Bear * Lost and Foundling * Hush My Mouse * -- The only extra is Jerry Beck's commentary on "Naughty but Mice."

Disc 2 leads with the seven Hubie and Bertie cartoons: The Aristo-Cat * Trap Happy Porky * Roughly Squeaking * House Hunting Mice * Mouse Wreckers * The Hypo-Chondri Cat * Cheese Chasers * Extras include four commentaries, one by Jerry Beck on "The Hypo-Chondri Cat," one by Eddie Fitzgerald on "The Aristo-Cat," and another with Glen Ford using audio from Chuck Jones on the same cartoon. Ford also goes solo on "Mouse Wreckers."

An 8-minute documentary, "Of Mice and Pen," looks at the rodential tradition in animation, and there is also a storyboard reel from "Hypo-Chrondri Cat."

The second disc is rounded out by other mouse-themed shorts, ostensibly extras themselves: The Country Mouse * The Lyin' Mouse * The Mice Will Play * Little Blabbermouse * Shop Look & Listen * Mouse Mazurka * Mouse-Warming * Mouse-Taken Identity * Mice Follies * It's Nice to Have a Mouse Around the House * Merlin the Magic Mouse * The quality of the transfers varies vastly here, with the 1960s selections looking particularly digitized; you can definitely see less effort was put into restoring these than the main cartoons. Unfortunately, the disc has no play-all function for bonus shorts, it's one at a time.

FINAL THOUGHTS:
Highly Recommended. Looney Tunes Mouse Chronicles: The Chuck Jones Collection is a bit of a mixed bag in terms of tone, but it stays pretty consistent in terms of quality. Ranging from the sweet to the sour, the main program of 19 different Warner Bros. shorts directed by one of their most creative minds is a hoot. 2/3 of the selections star the cute and innocent Sniffles, and the other 1/3 the far more biting Hubie and Bertie. I prefer the latter, but Sniffles has his charms, too, as do the near-dozen bonus cartoons included in the extras, making for 30 Looney Tunes in all.