Whips and boots and chaps, oh my ... in covering the ins and outs of the 2008 edition of the International Mr. Leather (IML) competition held annually in Chicago, Michael Skiff's documentary Kink Crusaders sheds some light on a subset of the gay male community that many gay men try to distance themselves from. Sure, the parade of big, burly guys in head-to-toe cowhide might appear somewhat intimidating (and stereotypical) at first, but this doc goes out of its way to prove that devotees of the kink/leather community are not too dissimilar from the rest of us.

Kink Crusaders is a straightforward, modestly produced but never boring mix of interviews and on-scene footage from the competition, which comes across as a mixture of business convention and beauty pageant. The doc explores the 30th edition of the IML, a nice round number and a good excuse to look back on how far the pageant has come since its humble beginnings. The film goes out of its way to stress the inclusivity of the pageant, with contestants that demonstrate that the usual "Leather Man" ideal is a constantly evolving thing. Most of the contestants assembled are still gay men from the big American and Canadian cities (with a few overseas contestants thrown in). However, over time the competition has opened up to include not just African-Americans and Latinos but handicapped men, straight-identified guys and even a few women.

Although there are no female contestants among the 51 men assembled for the 2008 IML, the main impression put forth in Kink Crusaders is that it's one big happy family of rebels, geeks and weirdos who are there to let their freak flags fly. For a movement that first emerged as a post-World War II reaffirmation of manliness by gay ex-soldiers wanting to appropriate the military gear they saw overseas, the current scene as K.C. portrays it has mutated into something that embraces kink cultures of all kinds. Since most people's exposure to this scene might be limited to memories of that leather-bound, mustachioed guy from disco's The Village People, the variety of sick 'n twisted people this gathering attracts is an eye-opener (including an overlong but memorable sequence with people who get off behaving like dogs - leashes, barks and all).

Kinky as it can be, the primary point of this film lies in conveying the infectious - even downright wholesome - enthusiasm of the participants. There are numerous times when it reminded me of the Miss America pageant. It's almost funny how similar they are, competitions that extoll physical beauty yet backpedal their way around it. Like at Miss America, the aspirants are a mixture of vets who seem to have pageantry in their blood and people from outlying areas who are honored to be nominated (the 2008 edition includes a married-to-a-woman Iowan among the latter, one of two straight guys in the race). Interestingly, in the same year the first black Miss America was crowned (1984) also saw the first African-American International Mr. Leather, Ron Moore (a controversial choice that is discussed here with much gusto by IML co-founder Chuck Renslow). Brains, more than beauty, are an asset here - as proven by the IML segment where the finalists are given a few minutes to spout off on the causes they believe in. While Miss America has the swimsuit (excuse me, Lifestyle and Fitness) competition, IML aspirants parade around in skimpy jockstraps. Finally, just like at Miss America, many of the contestants are frankly average-looking and even homely. Personality goes a long way!

Kink Crusaders rambles too much and has a threadbare, produced-in-the-basement quality. Overall, however, it serves as a pleasurable look into a side of gay life that most folks are barely aware of. In making this scene accessible to many, it winds up feeling like an extended segment from PBS's earnest, rarely watched LGBT affairs program In The Life (which isn't a bad show, come to think of it). I enjoyed it. 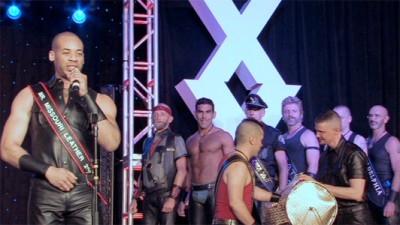 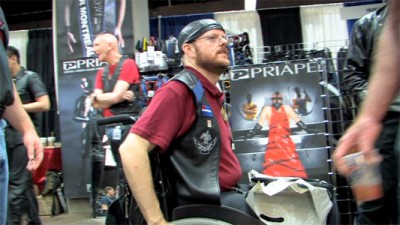 Breaking Glass Pictures' DVD edition of Kink Crusaders gives a decent treatment for this shot-on-video feature with an anamorphic 16x9 picture. The image is clean, balanced slightly towards the bright side, and agreeable throughout. The film also uses archival videotapes which aren't as nice, but it's not a huge portion of the film.

The disc sports a single, stereo soundtrack that is well-balanced and okay sounding. There are times when its obvious the filmmakers are using a single microphone while shooting a physically far-off speaker and have to make due with the inherent limitations. No subtitle option is present.

Basic stuff, nice to have but not essential: the Mini-Documentary: The Leather Curtain (16:27) strings together bland rehearsal footage from the show and bonus interviews from various attendees and participants (including Erasure singer Andy Bell). Short Film: Jockstrap (8:28) is an extended version of the IML jockstrap competition that was edited down in the final film. Rounding out the bonus materials are trailers from other Breaking Glass Pictures releases and an all too brief photo gallery.

Modest in ambition, scattershot but interesting documentary Kink Crusaders offers a peek into a world that may appear strange at the outset but actually winds up being sweetly endearing. The eager-to-please geniality of the International Mr. Leather contestants in this film gives them a puppy dog quality - puppies who are really into leather. Recommended. 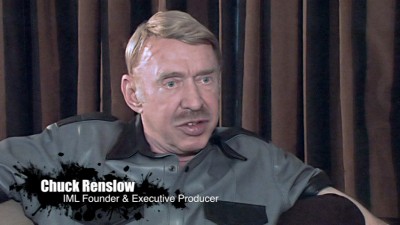 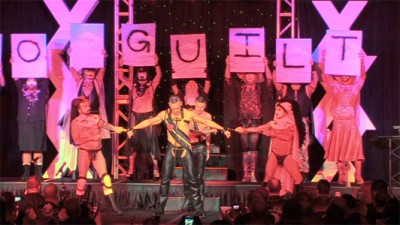