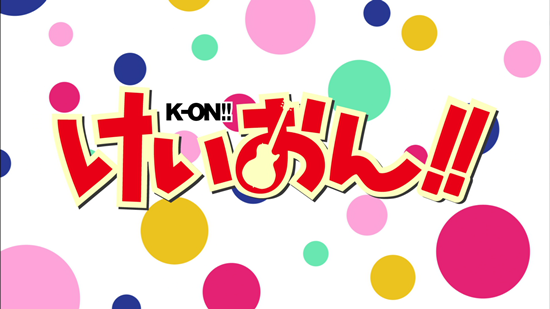 K-ON! is easily one of the more interesting anime series to arrive on Japan's airwaves in the past few years. It's a simplistic story in some ways, because it is basically just a slice-of-life comedic drama with rock music thrown into the mix. This actually is much better than that description is going to make it sound, though.  It's about the way the story is told that makes it so compelling.

To quickly summarize K-ON! is relatively easy: the show is about of high school girls enrolled in a Light Music Club and their goofy adventures in class, out of class, and within their rock club. The girls each learn or already knew how to play an instrument and they form a popular rock group amongst their fellow students. The series focuses upon their friendship, music, and it's generally a blast of good-natured comedic entertainment from start to finish with beautifully rendered animation and solid scriptwriting and direction.

K-ON! is  a series that is unabashedly aimed more at a female audience than a male one. This is a show in which none of the characters are explored in terms of focusing upon school crushes on male characters or upon stereotypical activities that series tend to emphasize in "girls" anime series. K-ON! isn't like those types of shows and it doesn't want to be like them either. This glorious creation is an original voice expressing the importance of friendship in high school years. Simultaneously, this makes K-ON! an excellent show not only for its primarily girl audience but for a male audience as well.

The characters are undeniably the main reason people enjoy this series though. Each of the characters has a unique personality and style that makes it easy for people to appreciate the characters as a group. It also allows, to an extent, for audience members to pick favorites on series such as this one and to enjoy them all while connecting more directly to one of them. I consider this the main reason for the success of the show - the likeability of the characters and the connections the series creates between the audience and the characters. Though the message, entirely universal, of friendship's importance is toe-to-toe connected.

Season 2 begins in such a way that newcomers to the show can become familiar with the cast of characters without prior knowledge (or less understanding). It isn't necessary to have seen all of season one prior to starting this second season. It's a new year of school for the characters and it does offer up a few changes. First of all, they all share the same main teacher now and are in the same classroom. Secondly, three of them are now seniors and the final band member is now the "junior" - as she begins her junior year. Thirdly, the characters choose to adopt a pet animal: an interesting turtle that becomes an "unofficial" (or is it official?) member of the club.  What isn't so different though is the wacky good-spirited fun the characters have together while performing music, drinking tea, studying for tests, and all the rest. 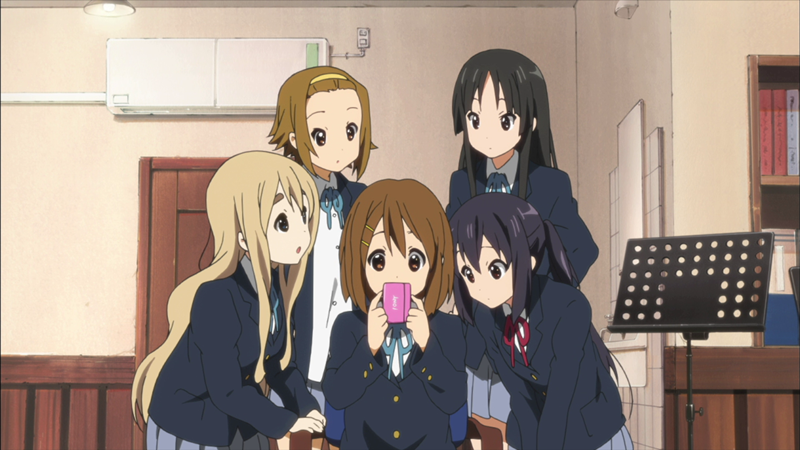 This second season two collection set has arrived on Blu-ray and it contains the second half of the anime series second and last (final?!) season. I was surprised that the series was ending so soon (relatively of course) because it seemed like there were so many ideas in place on this show and like it could have gone on and in many different fun directions that the audience may have enjoyed. I didn't ever get a sense that this was a show that NEEDED to end and arrive at its conclusion. I wanted to experience the great escapades of these characters as long as possible. This is actually the type of series to regularly experience because it is constantly charming, lighthearted, cheerful, and vibrant. You want these characters to succeed and to experience the journey with them.

The manga lasted longer (as is so often the case) so fans of these characters still had more fun to spend with the characters but this is an instance where having a wonderful anime series such as this end early is something that disappoints. This is one series I loved so much that I would have been enormously glad to see it continued.

I understood that this was one of the more popular and genuinely fan-supported anime productions of recent years, and still... it only had two seasons in total. Then it was completely "done".  That is, unless you count the theatrical film taking place after the end of the series, which I would count and will gladly take into consideration once the film has been licensed for North America (no announcement has been made yet). Please, Sentai Filmworks, at least one fan that has now spoken:  we want to see the film that takes place after season two ends. More K-ON! would be delightful and appreciated.

This series is a true joy. Fans of K-ON! will enjoy the second half of season two episodes. In fact, I'd even wager that most fans will be more satisfied with the quality on display with this set than the first. Many of these episodes are amongst the absolute best and the writer's did not disappoint. The "After School Tea Time" club has some great successes in this set and even have an awesome (if short) concert. Then there's the fact that the last several episodes give a relative sense of closure and fans will be pleased in how it ends. They might not enjoy it, you know, actually ending... but they will be pleased with the final episodes and that should help to reiterate how wonderful and special this unique anime series really is.

Viewers looking for a different anime experience than usual would do well to check this series out. The animation is incredible; the music is fun, and the writing and characterizations on K-ON! bring it to an amazing height. While it may not appeal to all anime fans, the series is one of the gems of the past several years and it's clear why it became a massive hit: because it just simply flat-out "ROCKS"! 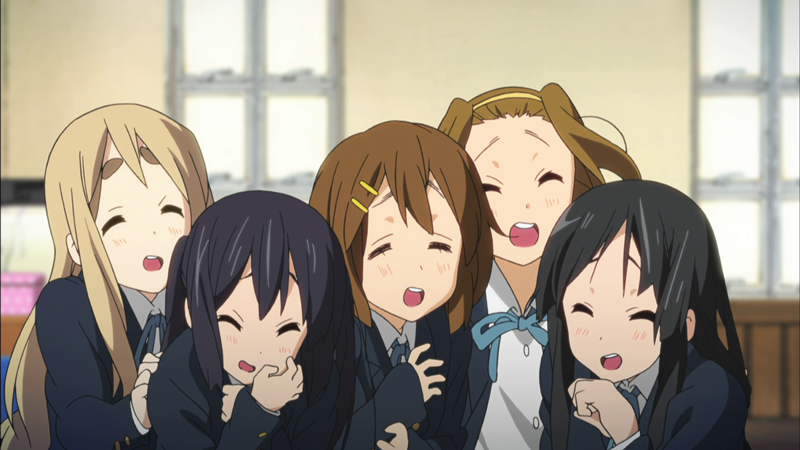 K-ON! looks pretty rockin' on Blu-ray with a 1080p High Definition presentation that perfectly represents the highly-detailed and sleek design given to the show. The backgrounds, character designs, and additional animation all shine triumphantly. This is a remarkable presentation to behold. The series is presented in its broadcast aspect ratio of 1.78:1.

The audio presentation has two main options: English DTS-HD Master Audio and English DTS-HD Master Audio. Both options present the series with 2.0 channels of audio. I was surprised an English 5.1 mix wasn't included, but I also was not underwhelmed by the lack of an option. The series is actually one that I prefer the original Japanese language version for anyway, though the dub for K-ON! does have its fans. While either audio track lacks in truly immersive sound it was interesting to experience this series with the sharp clarity provided with lossless audio tracks. It made a nice improvement on the show, and is well worth appreciating with either language dub.

The only supplements included on this release are Clean Opening and Ending animations and some trailers promoting other Sentai Filmworks releases. However, It should be noted that several episodes are promoted as normal episodes but are actually "bonus episodes" that take place after the series conclusion. These episodes continue the show from where the "final episode" ended and set thing's up for the theatrical film (in which the girls decide to visit a foreign country abroad to celebrate their school graduation). These episodes had some classic comedic moments and provided a nice counterbalance to some of the sadness of seeing the series conclude with these characters high school graduation. 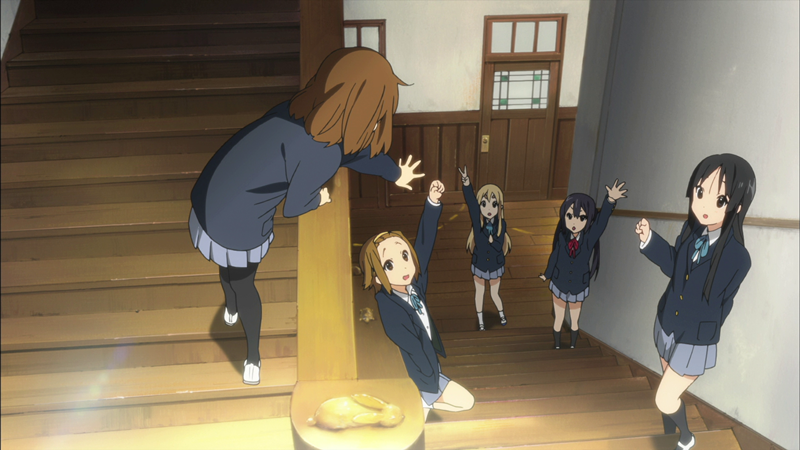 K-ON! is an awesome, rock-tastic series. If you enjoy rock music, friendship, and good humor it will be a series that appeals to you and your brand of enjoyable coolness. While K-ON! is aimed more at girls than boys it is a series that should appeal to both genders and a wide variety of ages too. Tales of friendship are timeless, and K-ON! is one of the more exciting ones to come out the past few years.

This set contains the second half of season two (episodes 14 through 27) and fans will be thrilled with the top-quality nature of these episodes. I was immensely pleased, but saddened that this was the last batch of K-ON! episodes ever. It's a Blu-ray set that shouldn't be missed by fans. K-ON! will remain as a true gem of a show that is worth purchasing and cherishing by devoted anime lovers everywhere.