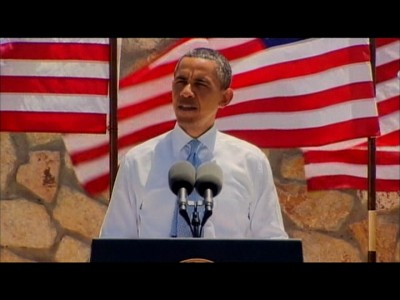 "Once she sees you'll do anything she says, she's bound to respect you!" - the overheard thoughts of Milhouse vis-à-vis Lisa Simpson on The Simpsons

Watching "Lost in Detention: President Obama's Tough Immigration Enforcement," the October 11, 2011, episode of PBS's news series Frontline, I kept flashing on that hilariously wrongheaded logic expressed by an eternal-loser Simpsons character, because the disheartening story the program tells is just one more painful but necessary reminder that that's pretty much the same logic our president uses when it comes to dealing with the House and Senate Republicans he's spent far too much first-term time and energy courting (and they, unlike Lisa Simpson with poor Milhouse, obviously have no intention of letting him down easy). "Lost in Detention"'s focus is on the failure of Obama's immigration strategy, which is to show Republicans he's "tough" by ramping up immigration enforcement to unprecedentedly extensive and punitive levels, then waiting for the return favor of meaningful immigration reform that will, of course, never come from a party that depends on racist anti-immigrant sentiment for a large number of votes. It's a fairly devastating exposé of how the "change" and "hope" so vaguely proffered by the exciting candidate Obama have translated into a depressing, seemingly always right-leaning reality. Or it would be devastating if the program didn't go on to detail the consequences faced by immigrant families as a result of the president's losing political gamble, showing us what true devastation looks like. 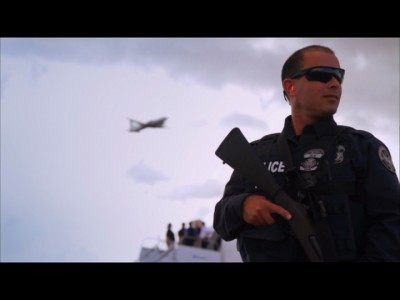 Reporter Maria Hinojosa is our guide, narrator, and interviewer, rounding up voices from all sides of what one interviewee, Stanford political scientist Gary Segua, calls the administration's "immigration enforcement on steroids." Or, better than sides, levels, from the far-removed places the decisions are made to the local communities and detention centers where they're enacted. Hinojosa sits down with administration spokespeople like Immigration and Customs Enforcement (ICE) deputy director Kumar Kibble and White House immigration advisor Cecilia Munoz, among others, who sit at the high, abstract level of policy and survey the situation with obligatory expressions of concern but unavoidable detachment and defensiveness as they reiterate to Hinojosa the same circular logic we see Obama put forth (in footage from a speech on immigration enforcement and reform he delivered in Santa Fe earlier in 2011) about how putting enforcement first and being "tough" will surely show those ever-reasonable Republicans that the president is "serious" and soften them up for eventual reforms that might at least safeguard against families with undocumented parents and U.S.-citizen children from being ripped apart. As Munoz says, the administrations feels its hands are tied, and it must enforce the law of the land until such time as its good intentions of rendering those laws more ethical and just might eventually come to pass. 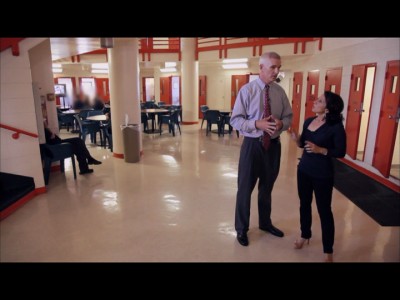 Less patient, fatalistic, and politically safe and timid are those at levels of the issue not cordoned off in airless inside-the-Beltway policymaking and political calculation. USC Professor of Public Policy Roberto Suro, along with the aforementioned Professor Segua of Stanford, explain the callous disregard for the concerns and realities of life in America's burgeoning Latino communities implicit in the Obama administration's pumping up of ICE's immigration-enforcement-prioritizing "Secure Communities" program, which claims to target serious criminals who can be deported as illegals but in reality has quotas that must be met for rounding up immigrants, regardless of the individuals ' threat to the community. Secure Communities patches police departments into federal immigration databases and puts any undocumented worker who comes into contact with local law enforcement (even as a petty thief, traffic violator, or friendly witness) at risk of immediate, indefinite detention and then deportation. That represents, these academic analysts point out, an arbitrary if not foolhardy and immoral preference for appeasing Republicans over Latinos (a great many of whom, we are told, are related to or know an undocumented immigrant and are thus personally affected with varying degrees of directness by immigration enforcement), whose 2012 support Obama should perhaps be more wary of losing than the support from Republicans he never had in the first place. 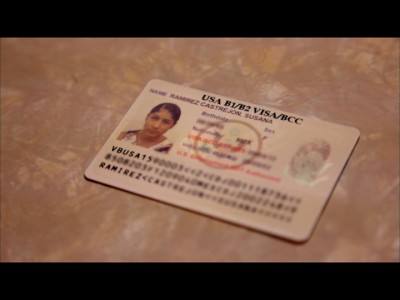 Intercut with and compared/contrasted to those points of view are Hinojosa's trek into the most relevant level of the discussion, immigration policy as it plays out on the ground. It's hard to decide which is more damning of the administration's politics-over-people priorities: The discussion with Mark Curran, a sheriff in Lake County, Illinois and Catholic Republican whose conservative instincts told him to wrap his department up tight with Secure Communities, a program he now, after years of direct experience with its implementation, deplores as counterproductive, punitive, and alienating to all Latinos, citizens or otherwise? Hinojosa's visit with the Arceos, an immigrant family living an hour outside of Chicago, whose wife/mother was stopped for failing to signal a lane change, taken away, detained in a place where they could not find (let alone reach) her, and deported before they ever knew what was happening? Former ACLU director Anthony Romero, former prison officials, and the woman who won't let her face be shown who all report that the huge, remote compounds where immigrants are detained (and to which Hinojosa is granted only very limited access) are dens of corruption, molestation, and illegally harsh punition? (As one expert reminds us, such detention is not intended to be a criminal, but rather an administrative process -- a matter of removing people from where they legally may not be to where they legally can be, not of punishing them.) Regardless, these voices together paint a picture of Obama's promised immigration reform and professed devotion to the U.S. as a land of laws and immigrants as a failure at best and a cynical, false promise at worst that is, if not exactly shocking after four years, a serious indictment of a president whose symbolic value, as either political punching bag or idol, has, if one pays attention to the facts, less and less to do with what he's actually doing. 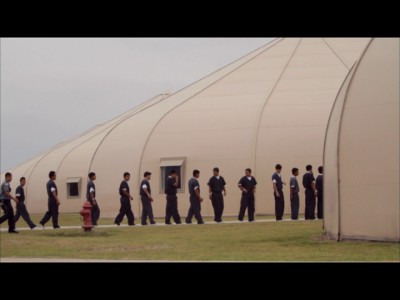 And it is just for those who are looking for a lucid, calm, serious search for facts worthy of their attention that "Lost in Detention" has been made. Hinojosa and director/producer Rick Young won't be getting any accolades for revolutionizing the TV-documentary format, but they apply it as it is standardly practiced with skill, conscientiousness, and intrepidness in their research, preparation, and gathering and editing of footage, all of which makes for a very engaging, convincing, dispassionate but entirely invested program that is held to the highest standards of the medium. Words are carefully chosen; a premium is clearly placed on accuracy; and there is a total absence of personal attacks or hyperbole. Hinojosa is a consummate professional, posing her questions with simultaneous frankness and respect to each of her interviewees, regardless of where they're coming from. That's not to say that this program doesn't have as its hypothesis that there is something seriously wrong, unfair, and destructive in the way federal immigration law currently exists and is enforced; it's just not a pretense at "objectivity" that cancels itself out by trying to act as if all opinions are equally valid and supportable. What it does do is all the hard, attentive footwork necessary to back up its point of view, letting us hear opposing takes on the situation and actually weighing things out and explaining them in detail in a rational, methodical way. That's a breath of fresh air in a media environment that's only going to get more hysterical and jingoistic as the presidential election year wears on -- a work of TV journalism that's more interested in raising our awareness and exposing us to a troubling sociopolitical reality than the petty and ineffectual satisfaction of just pointing fingers. 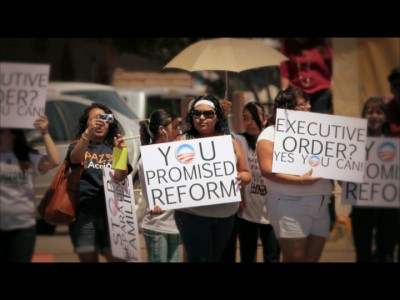 
The picture quality is more than sufficient to the program's digital-video sources, and there are no visual flaws or compression artifacts to report. The program is presented at its original broadcast aspect ratio of 1.78:1, with the only drawback being that it is letterboxed, not anamorphic, which will be noticeable on any widescreen set.


The Dolby Digital 2.0 stereo soundtrack is, again, of the highest possible quality, easily matching and probably surpassing best-of-circumstances broadcast audio, with no distortion, imbalance, or muffling. (With optional English subtitles for the hard of hearing.)


With "Lost in Detention," PBS's in-depth Frontline news program once again goes beyond the hot-button surface sensationalism of the 24-hour "news" blitz to give us a calm and penetrating look at what's really going on -- how our government and laws are actually being enacted in the real world. In this case, it's the Obama administration's hypocritical approach to immigration policy and enforcement that comes under scrutiny; despite the lip service our President pays to the urgency of long-overdue immigration reform, immigration enforcement is in practice now more right-wing and punitive than it was under Bush. "Lost in Detention" has a definite point of view, one that's quite critical of President Obama and the disconnect between his progressive talk and his all too often caved-in, center-right walk, but it's absolutely lucid, fact-based -- truly investigative. It gathers multiple points of view from all facets of the situation to build its case, and it does so very well as it gives us some of the real information we need if we want to be informed (not just whipped into a blind ideological frenzy) citizens. As such, it's both a crucially effective, troubling examination of policy on the ground in today's United States and an exemplary piece of something we need more of: journalism that remembers that the journalist's true calling is certainly not to punditry and not even to illusory equal-time "objectivity," but to exposing the truth to the public, and vice versa. Highly Recommended.