Columbia Classics // PG // April 3, 2012 // Region 0
List Price: $20.95 [Buy now and save at Amazon]
Review by Stuart Galbraith IV | posted June 1, 2012 | E-mail the Author
It is said that playwright Neil Simon turned a corner with Chapter Two, away from joke-filled comedies only hinting at darker themes (such as The Odd Couple, Plaza Suite, and The Sunshine Boys) to more autobiographical and heartfelt works like Brighton Beach Memoirs and Lost in Yonkers. Like the 1977 play it adapts, the movie of Chapter Two (1979) is about a recently widowed writer (James Caan) struggling to accept a new woman in his life (played by Marsha Mason) whom he's only known a few weeks. Simon's wife died of bone cancer in 1973, and later that same year he married actress Marsha Mason. Simon's grief and guilt apparently significantly interfered with their own happiness, and they divorced not long after this was made.

The movie, produced and directed by filmmakers long associated with Neil Simon adaptations, is well written but doesn't quite elicit the kind of audience empathy and emotional involvement it seems to require. There are several possible reasons for this, including the casting of Caan in the lead.

A manufactured-on-demand title under Sony's "Choice Collection" label, Chapter Two is presented in 16:9 enhanced widescreen, and generally looks good. The region-free disc has no extras, and indeed no menu screens at all. 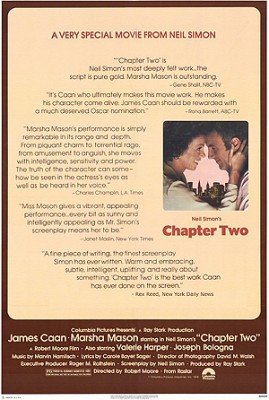 The plot is simple enough. Widower George Schneider (Caan) can't get over the recent death of his wife. (Recent and mysterious. The audience never learns how she died, or precisely when or where, nor do they learn much about her.) His press agent brother, Leo (Joseph Bologna) tries to console him, eventually setting him up on a disastrous series of blind dates. Meanwhile soap opera actress Jennie MacLaine (Marsha Mason) is coping slightly better with her recent divorce, aided by her best friend, glamorous Faye (Valerie Harper, post-Mary Tyler Moore weight loss and here looking overly bronzed and bony.)

George and Jennie have a series of meet-cute phone calls, with George initially mistaking her for someone else. They finally meet in the flesh a good 36 minutes into the picture, and scenes of their budding romance are sweet, funny, and emotionally realistic. However, in bed together George catches sight of his dead wife's portrait resting on the nightstand, and this sends him into a funk. Nevertheless, George and Jennie decide to get married, but his unresolved feelings threaten their happiness.

Chapter Two won a lot of praise when it was new (note the poster above) but today it seems awfully labored and even depressing without much insight. (Mild Spoilers) In the end, George's issues are abruptly resolved with about as much explanation as his first wife's death, i.e., practically none. Except early in his courtship with Jennie, George mopes about constantly, almost from beginning to end, and yet there's precious little working through his problems or even much discussion about it. Instead, most of the play/film seems concerned with Jennie's fruitless attempts to reach him.

The casting of James Caan in the co-lead hurts in strange, ironic ways. He'd been on TV going back to the early-1960s but his role as the hotheaded Sonny Corleone in The Godfather (1972) abruptly transformed him into one of the biggest stars of the '70s. It also typecast him in that mold. Even when he wasn't playing Italian-Americans (in movies like Rollerball, The Killer Elite, A Bridge Too Far) audiences tended to think of him in those terms - a wiseguy with temper - but in fact Caan's parents were Jewish immigrants from Germany.

Yet so engrained was his screen persona by this time, watching him here play not only an explicitly Jewish character but also a mild-mannered one whose depression turns him into jelly, and a surrogate for bookish Neil Simon to boot, is a jarring adjustment movie audiences had trouble making.

Further damaging this, at least for me, is an awareness that the role on Broadway was originated by Judd Hirsch (Taxi), an actor as ideally suited for this part as Caan is not. Indeed, Caan's line-delivery often even sounds like Hirsch. It's a second-best performance by a Hollywood star when a first-best performance by somebody less famous would have been better.

Mason, conversely, is excellent. Never one of this reviewer's favorite actresses, Mason here in a part written for, and in tribute of her plays to her strengths yet she's also reaching emotionally and succeeds beautifully.

Like other Simon adaptions the focus stays on the dialogue and performances, with minimal opening up and changes from the original play. Director Robert Moore, a veteran of Rhoda, had already helmed Simon's Murder by Death (1976), The Cheap Detective (1978), and a 1977 TV version of The Sunshine Boys (with Red Buttons and Lionel Stander) before this, while producer Ray Stark eventually filmed about a dozen Simon adaptations.

One last note: The musical score by Marvin Hamlish is another distracting curiosity. Its primary motif pretty directly quotes a score Hamlish penned just the year before, for the movie Same Time, Next Year (1978).

Presented on a region-free DVD-R, Chapter Two has that alternately grainy/soft-focus look of a lot of late-'70s/early '80s movies, but otherwise looks just fine, while the English mono audio is clean and clear. No Extra Features. The show is preceded by a warning that piracy is not a victimless crime and a website where those that don't can read more about it.

Chapter Two may very well have been the only Neil Simon movie this reviewer missed through the years, and while I'm glad to have finally caught up with it, I didn't miss much. The ambitious but overly angst-ridden screenplay and Caan's strange miscasting hurt it, while Mason's performance compensates in some ways. For Neil Simon fans, it's mildly Recommended.