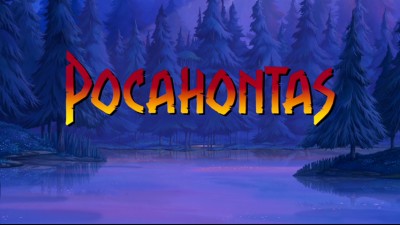 Disney's Pocahontas may not be the most faithful telling of the story imaginable (for some that follow history "to the books" and expect filmmakers to entirely follow suite that might even seem a gigantic understatement) but it is a creative, visionary, and beautiful film about the discovery of the "new world" in America by Spanish explorers and the emotional unity of Pocahontas and John Smith.

Like many Disney productions, there is a cast of acclaimed actors portraying these characters, represented through this version of the Pocahontas legend.  Irene Bedard voices Pocahontas magnificently by providing adequate warmth and compassion, as one would hope to find in Pocahontas's genuinely peaceful and compassionate character.

The songs are performed by Broadway actress Judy Kuhn. John Smith was portrayed by Mel Gibson. David Ogden Stiers voiced Ratcliffe. Meanwhile, a young(ish) Batman (or is it the "Dark Knight"?) voiced one of the crew members: Christian Bale was the voice of Thomas. Fantastic voice-work is constantly present and it represents a significant boost in engaging audiences with this special filmmaking.

The film begins with the diabolical Governor Ratcliffe bringing his group of explores into Virginia in the hopes of finding gold and endless riches. Unlike some of the ambitions for exploration that are held by certain crew members (mainly... just John Smith!) the wicked Governor is another cut-and-dry Disney villain with only his own interests in mind. Upon arriving in the new world of America, John Smith stumbles upon the brave, beautiful, and energetic Pocahontas. He admires her and begins to recognize that the "native people" that everyone from his land seem to fear are not as "uncivilized" as he initially believed. In fact, Pocahontas is a kind-hearted spirit who wants only peace between the people and in this he recognizes something that awes him and his heart.

The story brings forward the tragic element of death, anger, and blind hatred to the immediate forefront of the second-act. Pocahontas attempts to persuade her father and all her other loved ones that to murder John Smith is wrong. John Smith takes all the blame for a murder he didn't commit. Pocahontas and John Smith continue to have a close connection, both romantic and also spiritual. This carries into the concluding act of the story and the bittersweet, uplifting conclusion to the film. 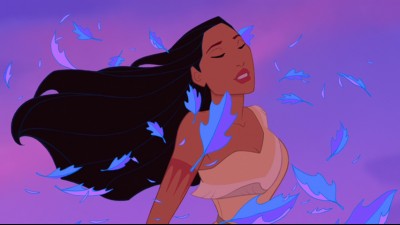 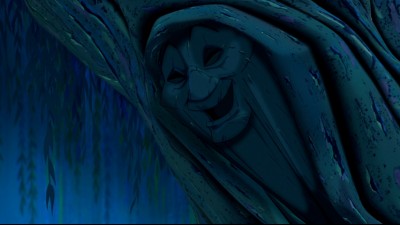 This was the first major animated Disney film to be created around historical figures and real events.  Because it has a real foundation in people who actually existed, it is something quite different as a Disney experience. For serious history buffs who know the material, I expect to find some not enjoying this version much. Yet Pocahontas essentially accomplishes what you would expect from Disney with their telling of the legend. To start, nothing sounds historically sound about a raccoon and bird befriending Pocahontas and cheerily tagging along while she is singing joyous songs in the English language while floating downstream in a relatively smallish canoe that easily glides off of gigantic cliffs. This film is a blend of fantasy and early attempts to bring historical fact into some of Disney's storytelling.

There are many wonderful things about the film. I would be remiss to not mention the songs used in the film. The score and the heartfelt song Colors of the Wind were both nominated for a major award and they help carry the film in classic Disney musical fashion. The voice-acting was quite convincing for the roles. The animation has some of the most lush background art in any Disney production. The actual character animation has some inconsistent moments, but the lush scenery amazes at every turn of the picture. The character design for Pocahontas is special, though. It is certainly iconic as a Disney characterization and a good portion of this has to do with the way Pocahontas was drawn and brought to life by the animators.

My favorite thing about the film is how it portrays a hopeful message of peace between people. This film proclaims the stupidity of rage, of anger, of hate. It instead sends a message that says loving others and respecting the differences between cultures is a key to understanding how we can bridge together a better tomorrow as people. It presents this as a definite.  This is a profound message to send. 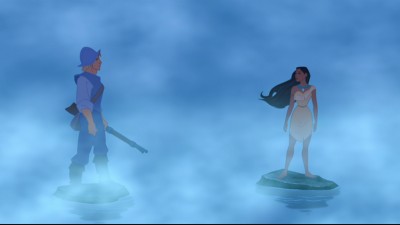 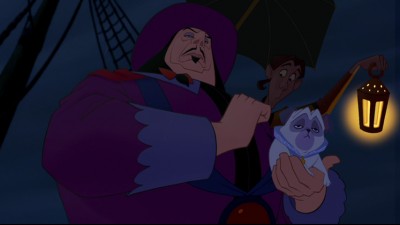 Alas, Disney has also included Pocahontas 2: Journey to a New World on this release. This does nothing noteworthy. The story is given a much worse Disney treatment and the characters do not remind me of the first film's characters much at all. To make matters worse, it fails at presenting messages of peace and instead turns itself to silly Saturday morning cartoon action. It disregards almost entirely the point of Pocahontas. Amazingly, to make matters even more disappointing in this awful direct-to-video sequel, Native Americans are treated disrespectfully. It was especially cringe-worthy to see the way the Native American bodyguard was presented: as a muscled and monotone for-hire without a personality. Pocahontas is also quick to forget her roots in the film, and the ending doesn't make up for it. I could see some kids enjoying this once, but most adults will be saddened to see the greatness of Pocahontas seemingly completely ignored.

Despite the inclusion of Pocahontas 2: Journey to a New World, Pocahontas is well worth the purchase to own on Blu-ray as it is another Disney gem. Share it with family and friends. And remember the beauty that is always "Just Around the Riverbend". 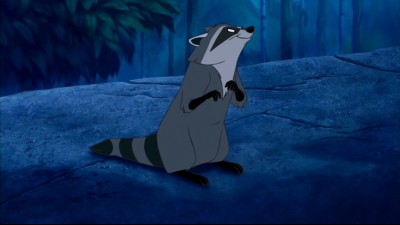 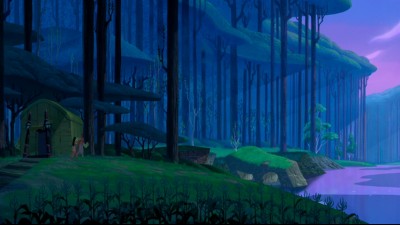 The images featured in this review are from the DVD edition in this Blu-ray/DVD combo release.

Pocahontas looks stunning in the 1.78:1 framed transfer that accurately preserves the original theatrical aspect ratio. The film features a clean, crisp, and magnificent digital transfer which presents the film with sparkling clarity that I do not recall ever seeing with Pocahontas before. The film looks better than it did theatrically - of course, I haven't seen the film in a theater in years but I can't recall it looking as impressive as it does here. The colors are lush. The art is breathtaking. The animation, especially the background art, is some of the best in any Disney production and it shines with the AVC encoded 1080p transfer.

The audio delivers the goods as well. The songs and score sound remarkable with pristine clarity. The songs in Pocahontas are a large part of the reason the film is so effective, and hearing both The Colors of the Wind and Just Around the Riverbend in lossless 5.1 DTS-HD Master Audio was an impressive aspect of the Blu-ray release.

Audio is also available in Spanish and French 5.1 Dolby Digital. Subtitles are provided in English SDH (for the deaf and hard of hearing), Spanish, and French. 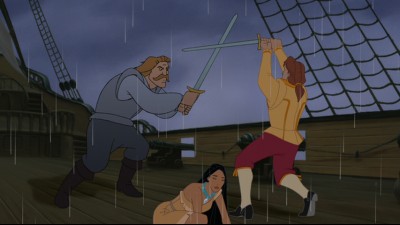 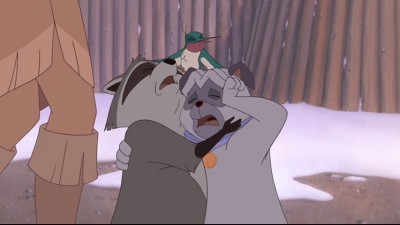 Pocahontas 2: Journey to a New World

There are a few extras on this release that might be pleasant experiences for longtime fans of Pocahontas. There is a commentary with one of the producers and the film's two directors.

Background information is also included on what was a scrapped Disney project entitled Hiawatha. The storyboards for that unfinished project are included.

Disney has also included on this release: deleted scenes, a deleted song, a making of featurette covering the music in Pocahontas, and a bonus cartoon short entitled Little Hiawatha. It isn't probably as extensive a collection as some were hoping for but it isn't altogether dismissible either.

Lastly, I want to state that Disney should have included the sequel, Pocahontas 2: Journey to a New World as a supplemental feature and not as a main draw towards a purchase of this release. It is not promoted as an "extra" but it essentially amounts to being one. 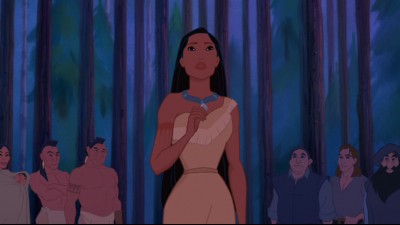 Pocahontas is one of Disney's best and most under-rated films of the 1990's. It shares a message of peace and understanding of others and it does so in a profound way. The songs are stellar too, as is the animation. Fans of Disney should definitely purchase Pocahontas. You might want to skip the inferior sequel. Just experience Pocahontas as the beautiful animated classic that it is.