Lockout is the bajillionth film produced and co-written (in some capacity) by French producer-director extraordinaire Luc Besson. Guy Pearce stars as Snow and Maggie Grace plays the President's daughter, Emilie, who is kidnapped while on a mission aboard a giant space station that houses all of the Earth's criminals in cryo-stasis. Snow has been convicted of espionage, but maintains his innocence. He's given a choice: the fridge or get up there and rescue the President's daughter. Not a tough decision to make, I reckon.

I don't know if it's already been said, but Lockout, to me, is basically Escape From New York and Escape From L.A., but it's Escape from Outer Space. Nowhere near as good as New York, but the concept and idea is sound. Snow (Pearce) is Snake Plissken and Maggie Grace is...still the President's daughter that needs rescuing. What separates this film from the others is that Snow is not played as a straight up John Wayne tough guy like Kurt Russell played it, but rather a chain smoking, wisecracking smartass that can take a punch and dish it right back while cracking a joke at his, or the guy he just hit's expense. I appreciated that.

Snow must navigate through the space station on this suicide mission in order to try and save Emilie from the general population. Ew. The convicts on the space station (space jail) want release or they will start killing the crew. The U.S. government is standing by with all options on the table meaning that when Emilie is safe and sound they will blow up the entire ship with everyone on it. Hostages and criminals.

Lockout is not a deep film by any means, but it is a lot of fun. It's a hyper-kinetic charge of a film that is completely self-aware and doesn't take itself too seriously. Pearce has shown comedic chops in the past, but it's been a LOOOOOONG time since then. Here he's the wisecracking tough guy that's gotta get Emilie to safety before time runs out. That's it. That's the gist of it. Okay, I lied. Snow is also a former government agent framed for a crime he did not commit and has to clear his name.

There's really no trying to "think" your way out of this one. Then again Luc Besson productions are always straightforward affairs that are short and to the point. Lockout is no exception. Personally, I enjoyed the flick a lot. I missed it in theaters, but remember the comments about how awful and awkward the editing was and how it was used to hide or disguise the bloodshed to make it more "appealing" for mass consumption. The Blu-ray is UNRATED, so that elevates it a little. UNRATED Luc Besson produced projects usually get that sort of treatment. They'll release a PG-13 version and then the Blu-ray will be UNRATED, so it balances itself out.

I recommend this film for sci-fi fans and especially for Guy Pearce fans. It was a fun romp and that's all. By the way, don't mind the logic-gaps used throughout the film with regards to space and gravity and how they're both defied. It just looks cool. 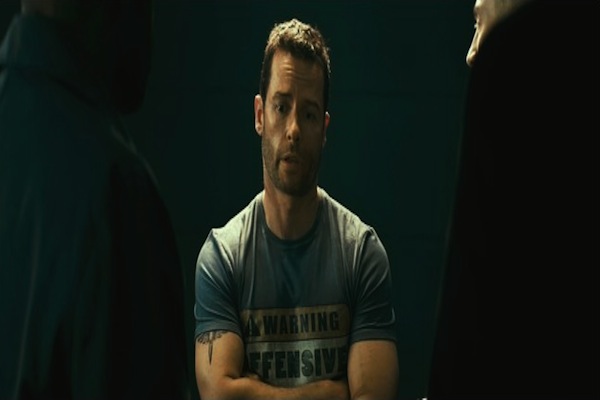 Lockout is presented in 1080p, 2.40:1 widescreen. Lockout has a very stylized visual palette that lends itself to the high-definition format. During scenes of stillness, flesh tones look incredibly natural; you can see every pore on everyone's face and so forth. When the action gets started or shifts to a big special effects sequence, is when the palette changes somewhat. There are various instances of softness and contrast boosting used for obvious aesthetic reasons including those damn lens flares. It's not a source problem, because that's how the film was shot. Black levels are deep and never crush, there is some minor banding in those outer space scenes, but otherwise it's an exceptional looking Blu-ray. 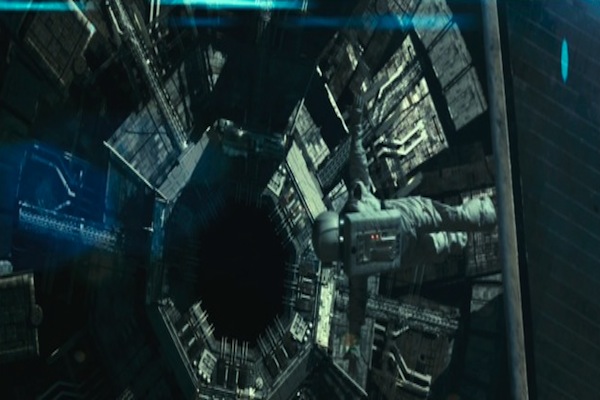 Lockout is presented in DTS-HD MA 5.1. What we have here is a failure to communicate. No, not really. This soundtrack kicks all kinds of ass! Dialogue is front and center! Explosions envelop the sound-scape, bullets whiz by your head and all the punches, kicks, and foreign objects used to cause bodily injury can be heard and felt in excruciating detail. It's one of those soundtracks that just beg for a lossless soundtrack. You just know it's going to be awesome. And it is. 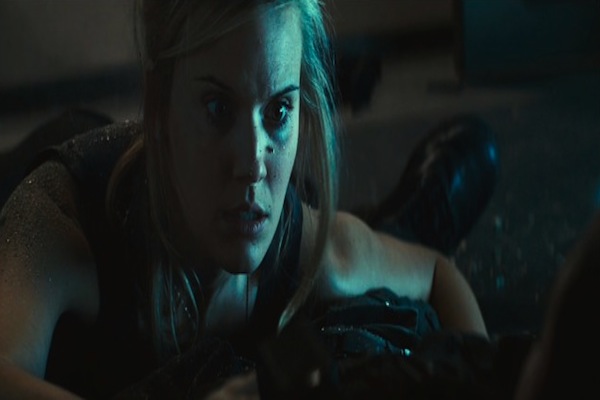 Lockout has a whopping TWO featurettes that run about 10-minutes each. There's a really cool featurette that focuses on the production design of the film, which I enjoyed and a standard fluff piece that features cast and crew going on about how great it was to be involved in the project. Get a load of the production featurette - one of the art directors sounds exactly like Mark Strong. I thought I was listening to Archie from Rock N Rolla! 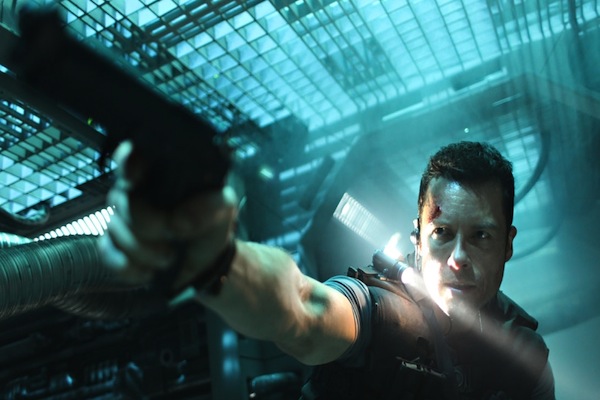 Lockout is what it is. Escapism. Guy Pearce is there for the ride and brings his comedic chops to a very likable character in a somewhat unlikable position. He doesn't complain, though. I hope Maggie Grace doesn't get pigeonholed in these types of films where she plays someone's daughter getting kidnapped all the time. Liam Neesen and Guy Pearce can't be there to save her all the time, you know. The Blu-ray quality is stellar in the video and audio fronts, but drops the ball in the special features section. The film is UNRATED, and all of the blood that was removed from the PG-13 theatrical version has been restored. This Blu-ray is the way to go.