After triumph and tragedy, the Spartacus saga returns to the small screen to continue the tale of a former slave who has lost everything and will do whatever he can to exact vengeance on those that have done him wrong. Spartacus: Vengeance picks up after the events of the first season, which was called Blood and Sand. The show went into production, but had to be delayed due to Andy Whitfield's illness and subsequent death. Gears shifted and a prequel was created that follow the events that led up to Blood and Sand called Gods of the Arena, which introduced more characters that carried over into Vengeance.

Spartacus: Blood and Vengeance picks up shortly after the events that culminated with the House of Batiatus massacre where Spartacus (Liam McIntyre) freed all of the gladiators and led them to revolt. He and his comrades carry on freeing slaves and adding them to their ranks. Since the House of Batiatus no longer stands Spartacus' new quest is to kill the man who committed his wife to slavery, Gaius Claudius Glaber (Craig Parker).

Lucretia (Lucy Lawless) has returned, and this time she bears the gift of foresight from the Gods. Ilithyia (Viva Bianca) is back and even colder,conniving, and more delicious than ever. Along with her husband and Rome emissary (politician) husband, they will try to squash the uprising led by Spartacus and his legion.

I loved Andy Whitfield's performance in Blood and Sand, because it's what cemented that season's success. We were there for the journey, side by side with him until the end. Gearing up for season two, he took ill, and would not come back to finish the series. Having not seen Vengeance when it premiered (I don't have cable) I was sort of skeptical, because I didn't think the show could carry forward without Andy. Gods of the Arena was awesome, because it introduced Gannicus (Dustin Clare), but it still wasn't as great as Blood and Sand was. The fact that it was also a "prequel" helped in that regard.

It took the first few episodes of Vengeance for me to embrace the show. First off, the show retains its quality while adding colorful embellishes here and there - more notably, the slow-motion scenes seem to have been tweaked, which gives them a faster look even though we're watching it in slow motion. I really enjoyed that the full supporting cast was made the "primary character" of the series. Everyone that is not Spartacus seems to have more screen time than Spartacus himself, which could be a good or bad thing. In this case it's a good thing, because every other character is fleshed out. We get to see what drives them, they're motivations, ulterior motives, etc. For a minute there it turned into Spartacus' Co-Stars: Featuring Spartacus.

As far as the "new" Spartacus goes - Liam McIntyre had some pretty big shoes to fill. He's a decent enough actor, but he's really small in physique-wise compared to Andy. They both sound about the same (vocally), but there were a few instances where I really didn't care for his character at all. He was useful, but he remained more of a tactical player and in the background as opposed to being a point man out in front. The relationships of some of the other characters like Crixus (Manu Bennett) and Naevia (Lesley-Ann Brandt); and the Gannicus/Oenomaus dynamic carried over from Gods of the Arena were far more fascinating than Spartacus' ultimate quest, in my opinion.

With that minor quibble aside, Spartacus: Vengeance brings on the blood, sex, and violence and reaches new heights in its depiction of it all. It's hardcore to the max and I am looking forward to the next installment of the series.

A Place In This World

Wrath of the Gods 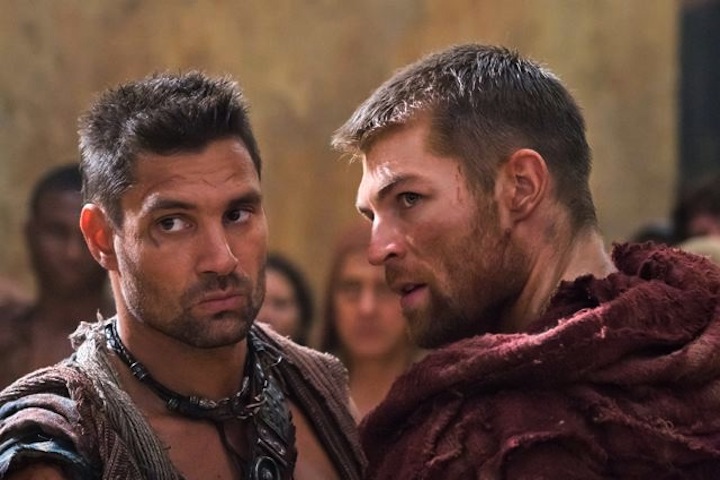 Spartacus: Vengeance is presented in 1080p, 1.78:1 widescreen. The Spartacus series has always stayed consistent with its look. It's extremely stylized in terms of color palette during the day, but during the night, it actually starts to look somewhat normal instead of being blown out. Contrast is usually boosted in outdoor daytime shots, while nighttime shots look the best; black levels are deep and never crush. Flesh tones do look natural, with exquisite detail down to the tiniest pore. Colors are rich and vibrant - especially the crimson red of blood. Dirt and grime also fare well in terms of the detail. The image inherently soft due to aesthetic choices, along with some parts of the CGI effects, but no added tinkering was spotted. Grain levels are steady, sharpness is kept in check, and I did not spot any scenes of added DNR smearing. 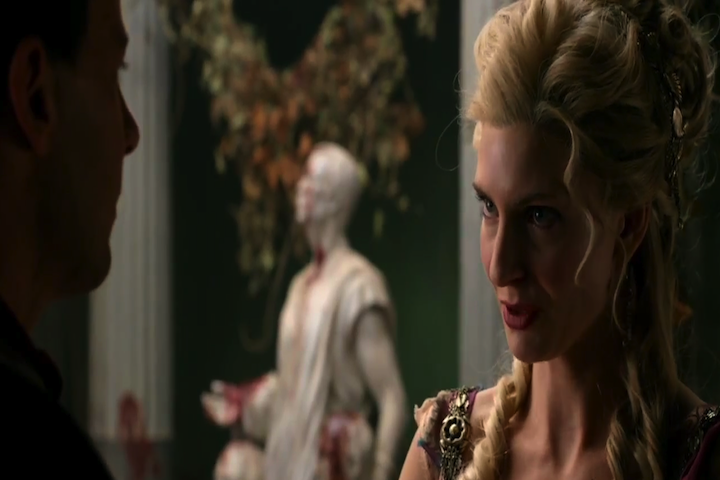 Spartacus: Vengeance is presented in Dolby TrueHD 5.1. From every hoof, running step, sword and shield hit, this lossless soundtrack delivers the goods in spades. Dialogue is crisp and clear - every eloquent syllable along with some of the more crass dialogue is handled perfectly by the center stage. The surround channels liven up during scenes of ambush. You can hear people running around in the bushes or forests during certain scenes, which immerse the viewer. The LFE channel delivers the low-end in thunderous portions - from horse stomps to battle-axes to the face, with depth. The hits are definitely felt. 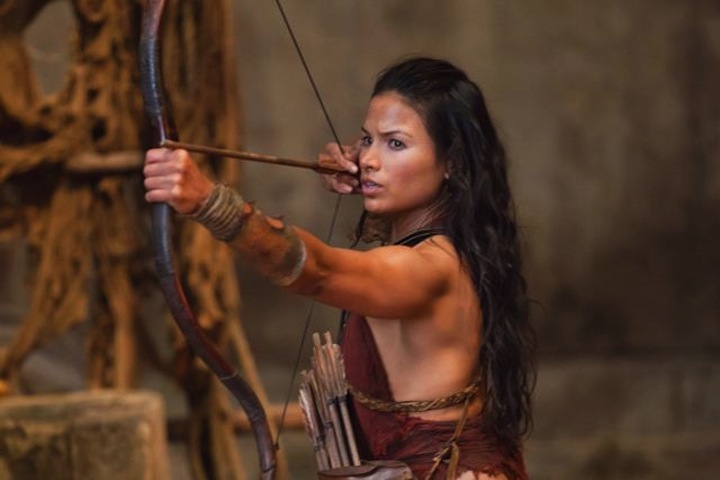 Spartacus: Vengeance comes fully loaded, or as loaded as can be, with many extended episodes, audio commentaries on select episodes, featurettes, behind-the-scenes, bloopers, etc. These extras are rounded out with a special teaser trailer for the upcoming Spartacus: War of the Damned conclusion in 2013. The audio commentaries and extended episodes are a Blu-ray exclusive. 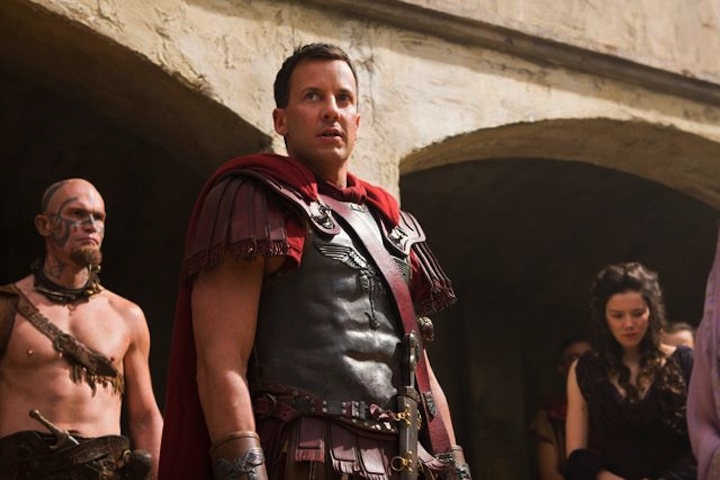 I'm glad that I wasn't too quick to dismiss the latest entry in the franchise - no one will ever be able to replace Andy Whitfield, but in watching Vengeance, it's obvious that the filmmakers weren't trying to. They had a story to tell and brought in the person that they felt could best fit the character. Whether it worked or not is certainly up for debate - I was able to get past it. It's also good to know that the adventures will continue for at least one more season in January 2013. Bring it on.