Lewis Black: In God We Rust 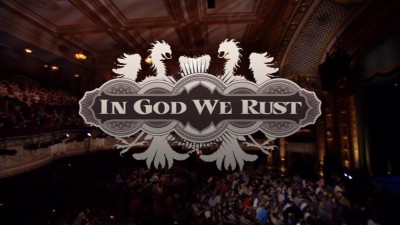 
The Story So Far...
Lewis Black has built a solid career as an angry comic through his appearances on The Daily Show and his stand-up act, and is known best for his screaming, profanity-laced rants against stupidity, punctuated with forceful finger-pointing. On home video, he's been especially productive, with four stand-up specials on DVD to date, along with some History Channel specials, and his The Root of All Evil series. DVDTalk has several reviews available.

The Show
Lewis Black's last special, Stark Raving Black, was a rather dark affair, with a focus on death, offering an introspective rumination on life in general. It was probably the least funny of his stand-up sets, even if it was honest and thoughtful, and still entertaining. But it could have signaled a turning point in his career, changing from a comedian to a stand-up philosopher. Thankfully, the funny has returned with In God We Rust, as he picks up one of the themes from last time, technology, and runs with it, looking at the distractions Americans readily welcome into their lives.

Standing before a giant red cube hovering on the stage at Minneapolis' State Theater, a set design courtesy of Black's father, the comic works his way into his traditional enraged self, starting off slow with talk of Minnesota (and the poor image provided by Michelle Bachmann) and a word of warning to those who thought they came for a fun night of laughs with a comedian. Those people got plenty of laughs though, with Black railing against holidays, especially Valentine's Day, before diving into his bread and butter, namely the stupidity of America's political leaders, including the lack of progress in gay marriage and abortion rights and the rise of a third party in the form of the Tea Party. 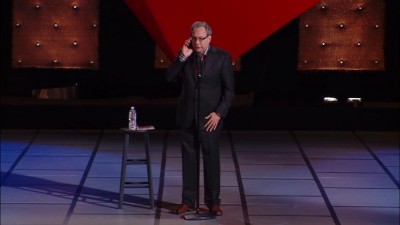 Tied into that stupidity is the disappointment Black has for a country that accepts this from its government, putting the blame on all the garbage that monopolizes American's minds. Whether it's his dismay at knowing all the cast members of Jersey Shore (and that fact that its at least partially from their status as published authors) or the similarities between tripping on LSD and using Apple's SIRI, Black is a master of his own unique pacing, building up momentum outlining a situation or idea until he explodes. Though some of the bits have aged a bit since this special was shot in May of 2011, and some have become overdone as jokes in the meanwhile, unfortunately, most are still directly on target.

Though he's late in the game in tackling smartphones, body scanners and Facebook, that doesn't make his points any less meaningful or less enjoyable. Ripping the iPhone for its assortment of applications and lack of phone functionality (with some bonus Genius bar jabs as well), or explaining his bad experience with the Droid is nothing new to followers of the tech scene, but it doesn't feel worn out coming from Black, probably because he's not coming at it from a tech perspective. He just simply wants his phone to work. The same goes for his disbelief of the value assigned to Facebook and the insanity of virtual farms in Farmville. Sure, many have spoken about this before, but few have made a comparison of the social network to the value of their own genitalia, and most aren't nearly as funny. 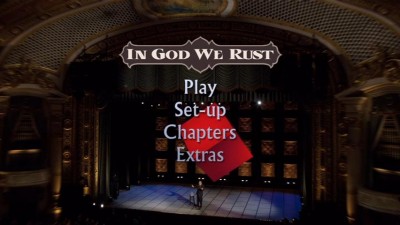 The DVD
The DVD is a one-disc release, packed in a standard keepcase, with an embossed slipcover that simply repeats the cover art, and a small insert about the stage design. The disc has a static anamorphic widescreen main menu, with options to play the film, select scenes, adjust languages and check out the special features. Audio options include English Dolby Digital 2.0 and 5.1 and English DTS 5.1, while you also get an English subtitle track.

The Quality
Presented in an anamorphic widescreen transfer, the special looks good all around, delivering solid detail and a clean image, whether showing the well-lit Black or the dimly-illuminated audience. Color are good throughout, with Black's ski tones looking appropriate, the big red box behind him standing out brightly but without burning, and the blue lighting on the floor looking good. There are no problems with digital artifacts or any other defect, though some of the angles look a touch sharper than the others.

Though delivered in a 5.1 presentation, the audio wasn't a great experience, as Black shares the center channel and side speakers with the audience, while the rear channels are purely audience reaction with an echo of Black's voice. It's not that Black's voice isn't clear and separate from the audience (it is) but that keeping the two separate in the speakers replicates the theater experience more faithfully. Surprisingly, the DTS track has a bit less oomph than the Dolby track, requiring you to pump up your volume a bit. Other than that, there wasn't much of a difference.

The Extras
On Black's last special, a lengthy behind-the-scenes documentary was included. This time, it's a set of four featurettes giving more insight into the production, starting with "The Walkout" (2:05) a short clip cut from the special. At one point, while discussing how people react to his act, he talks about people getting up and walking out and generally bashes those people. Well, it seems this inspired one couple, and this extra captures the result and Black's reaction.

There's more interaction with the crowd in the 6:50 "Audience Participation," which shows Black coping with audience members who can't keep their mouths shut, including one woman in the front row who can't stop reminding Black that his parents are in the building. Watching a veteran comic cope with a heckler is like looking at a work of art.

"Promo Shoot Outtakes" (4:51) is a bit of fun from the production of the commercials for Black's special, showing his process in delivering his lines, and some interaction with his dad over the set. It's an amusing featurette, showing Black in a natural light.

The final extra, "Photo Gallery," is a five-minute automatic slideshow of photos covering the prep work on the special, the performance itself and even a look at the painting that inspired the set. It's nice visual insight into the making of the special. 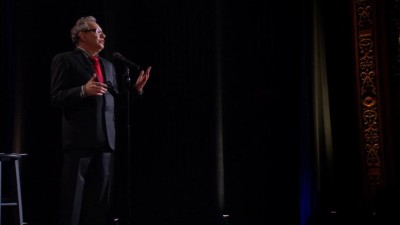 The Bottom Line
In God We Rust is a solid bounce-back special, after Black's last show left fans a bit cold. Focusing mainly on politics and technology, Black utilizes his trademark way of getting his point across to power through a rage-filled 80 minutes illustrating America's funniest dysfunctions. The disc looks and sounds quite nice, and has some interesting extras, making it an enjoyable pick-up for the comic's fans.