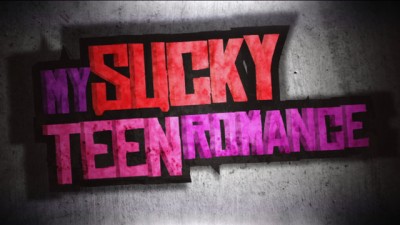 The plot of My Sucky Teen Romance is fairly simple but it is effective and creatively plotted from beginning to end. A couple of teenagers go to the annual SpaceCON; a convention that essentially exists to please geeks. The girls mainly seem to go to meet some boys. However, leading heroine Kate (Elaine Hurt) does enjoy the occasional comic-book and is a geek too. Some boys (friends... not boyfriends) also attend the convention. They seem to mostly be attending because they are... well... just plain ol' simple geeks. Mostly!

Kate realizes upon arriving at the con this year that her very own grocery-boy crush (Patrick Delgado) is attending. The cashier's name is Paul and he's dressed as a vampire this year. Interesting? Before long the two begin a short romantic fling. It's cut a bit short when he accidently bites her and turns Kate into a vampire. Oops.

See, there's this evil vampire named Vince (Devin Bonnée) who rolled into town and turned Paul and his cashier co-worker into vampire blood-sucking fiends. Yet not all vampires actually want to be vampires and to begin "feeding" (as the saying goes) and Kate's own crush Paul was trying to resist being a genuine vampire. Once Kate is turned vampire she too is left in want of a normal life.

The rest of the movie essentially amounts to a series of comedic mishaps while the newly turned vampires and their closest friends attempt to find a way to turn them back into the human beings they once were. Along the way, we meet other dysfunctional goofballs and geeks at the con and even a brief panel hosted by Ain't it Cool News founder Harry Knowles, as he discusses how a vampire wouldn't sparkle - among other things.

First of all, I think the fact that a 17 year old girl made a movie this good is amazing and its downright stellar (even badass) to be a filmmaker at such a young age. It amazes me not just because it's so rare to see such a young and ambitious filmmaker but also because the film is technically better made than tons of flicks older and supposedly wiser filmmakers sometimes produce. Emily Hagins is the real deal - the film is well structured, creative, and entertaining.

There are some definite positives: the script is fun and is has a nice spin on the vampire craze. This aspect should especially make the film interesting to younger audiences (most especially anyone who thinks of the Twilight saga as over-rated). The direction is unique. The way that Emily Hagins framed certain shots and scenes is artful and shows a talent that is sure to even grow further than the current of today. 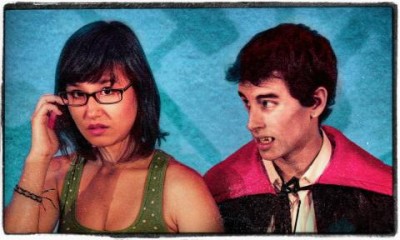 The cast is likeable. This is a major plus. Everyone involved seemed to really be enjoying their roles, and this was something that stood out as significant. However, some of these actors were clearly inexperienced and it's something which could detract from the enjoyment level for some audience members. This is certainly no deal-breaker, though. We are talking about high-school kids and young adults. My Sucky Teen Romance is an indie, low-fi production after all. There's definitely a limit to what could have been done from conception to completion of this project.

Unfortunately, the film is also far from being the comedic wonderment that it seems to want to be for viewers. The comedy mostly just seems to fall flat. Most of the jokes are well delivered anywhere near as well as they needed to be for the film to stand out as a successful comedy. It seemed as though everyone involved was trying really hard with this, but it just didn't work. I wish the film and those who were involved in making it had been able to accomplish all of the ambitions held.

The good news is that this film is charming. It has loads of charm. You can tell that everyone involved is well-spirited and that these were people who worked well together. It's a wonder recognizing that such young and talented people came together and tried to make this a solid production from beginning to end.

My Sucky Teen Romance may not be perfect. I found the film hit and miss throughout. Yet it delivers in sheer creativity and it's perfectly clear that this was a more-than-solid attempt at making an actual motion-picture to rival anything else being produced and created. Hagins genuinely surprised me by crafting such a strong effort, and I applaud her for being herself. Making movies as a teenager cannot be easy. Making art is general isn't something that is considered easy... and it's because it never is. Hagins might still need more experience to develop more as a filmmaker but it's clear that intelligence and enthusiasm isn't lacking. Certainly, My Sucky Teen Romance is worth seeing for its heart and soul and creativity. 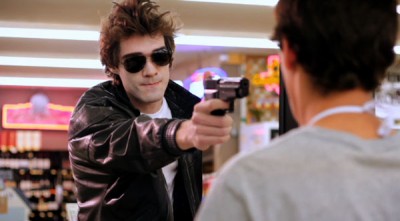 My Sucky Teen Romance looks surprisingly great on Blu-ray. The film had a professional in the role of cinematographer. The photography is exquisite and has a sparkling cleanness in the High Definition department. The film is presented in it's original aspect ratio of 1.78:1. This transfer's not going to be considered a frontrunner of video or anything of the sort but this is a independent film with solid production aspects.

The lossless 2.0 Dolby digital audio is uncompressed and it sounds decent enough for dialogue and for the film's quirky score. It just doesn't excel beyond these stages. The track is font and center heavy and doesn't expand beyond this area of speaker audio-enhancement that much.

Writer/Director Emily Hagins and Producer Paul Gandersman created a worthy commentary track that any fan of the film should consider listening to. These two are energetic and have great enthusiasm about the film. Details became shared about the film's creation and the overall behind-the-scenes aspect of making the film and all of its efforts happen.

A Behind the Scenes featurette contributes some neat making-of material with interviews with the main cast.

Cupcakes is a short film written and directed by Emily Hagins after the completion of My Sucky Teen Romance.

Lastly, the disc also includes a deleted scene, blooper reel, and theatrical trailer to round out all the aspects of the release. 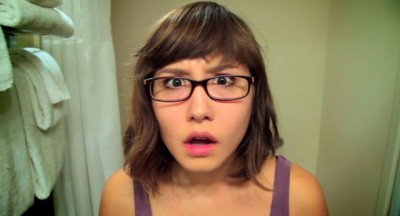 My Sucky Teen Romance is an interesting teen movie that openly mocks the recent vampire craze with teens everywhere. The film is stylish, creative, and entertaining. While it's not perfection it does excel overall. Teenage writer/director Emily Hagins deserves the accolades she receives for attempting something so different and ambitious at such an early age. The effort is certainly very commendable and well worth checking out at least once.