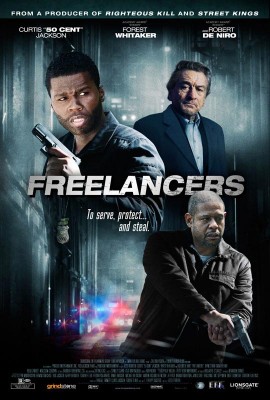 Freelancers boasts a whopping thirty credited producers according to the Internet Movie Database, and one of those fine filmmakers even produced Righteous Kill, the crappy geriatric cop drama with Robert De Niro and Al Pacino. Despite the ridiculous number of helpers on this project, Freelancers is about as generic a cop drama as you can get. De Niro shows up here, too, as do Curtis "50 Cent" Jackson and Forest Whitaker, and between the weak action sequences and impossibly-cliché story of De Niro's corrupt police captain vs. 50 Cent's rookie legacy cop, Freelancers is bargain-bin junk.

New NYPD officer Malo Maldonado (50 Cent) hits the streets with the heavy burden of honoring the legacy left by his late father, a department veteran slain in the line of duty. Malo and his academy buddies, Lucas (Ryan O'Neal) and A.D. (Malcolm Goodwin), are placed with veteran officers in a department rife with corruption and graft. Among the key players are Lieut. Dennis LaRue (Forest Whitaker), a coke-snorting hothead, and Officer Billy Morrison (Matt Gerald), an unabashed racist and bigot. Capt. Joe Sarcone (De Niro) was the partner of Malo's dad, and Sarcone takes Malo under his wing and quickly schools him in the art of stealing evidence and executing loose ends.

Freelancers is a bad movie for a number of reasons, but 50 Cent's character is atrocious. Although the film hints that Malo got into the police academy by bedding the wife of a judicial official, Malo leaves training ready to enforce the law. It takes all of 6 hours before Malo has fully committed to a corrupt path lined with drug use, prostitutes and murder. There's also some repressed memories that Freelancers conveniently allows Malo to resurrect late in the game. These are important in pinpointing where allegiances lie, but the film piles the revelations on a shaky foundation of cop-movie clichés.

The opening scenes of Freelancers are the most interesting. Had the film been about the three rookies' beat work with their volatile superiors, it might have been an interesting character study. One cop lets minority suspects off the hook to keep them out of the system, while another starts a tense, racially motivated standoff to satisfy his own ego. Malo shows sparks of good character at this point, diffusing the conflict and sending everyone home alive. Malo also flirts with longtime crush Cyn (Anabelle Acosta), but is content to trade her affections for those of for-hire women and narcotics.

Director Jessy Terrero, who shepherded Soul Plane to the screen in 2004, allows his film to miss dramatic beats and flounder through bland action pieces. The cinematography by Igor Martinovic is decent, but the bland hip-hop score by Reg B reveals the film's low-budget roots. De Niro is, as always, fine as Sarcone, and Freelancers certainly isn't his worst paycheck project. Whitaker emulates his character from the slightly less forgettable Street Kings, and 50 Cent looks uncomfortable throughout much of the film. Freelancers is essentially direct-to-video folly, and nothing about it warrants 96 minutes of your time.

Lionsgate gives Freelancers a competent 2.40:1/1080p/AVC-encoded transfer. The image is often exceptionally sharp and detailed, with nice, gritty texture and deep backgrounds. The image is quite stylized, with oversaturated colors and blown-out highlights, but black levels are solid. I noticed some artifacts in trees and around text, and some unexpected aliasing occurs in outdoor shots.

The 5.1 DTS-HD Master Audio soundtrack is similarly competent, with nice range and clarity. Dialogue is clear and integrated nicely with the score and effects. The surrounds are not overly taxed, but some action and ambient effects find their way to the rear speakers. The subwoofer kicks to life to support the hip-hop soundtrack. English, English SDH and Spanish subtitles are available.

The Commentary with Director Jessy Terrero and Actor Curtis "50 Cent" Jackson is straightforward and not especially interesting. The disc also includes a number of deleted scenes (18:35/HD); a Behind the Scenes with Interviews (14:30/HD) featurette that serves as a making-of; Extended Interviews with Cast and Crew (33:20/HD), with participation by Terrero, 50 Cent, De Niro and others; and the film's theatrical trailer (2:32/HD).

Freelancers gives its audience nothing it hasn't seen a hundred times before in better cop dramas. This tale of corruption and retaliation is predictable and largely uninteresting, and actors 50 Cent, Robert De Niro and Forest Whitaker do little more than go through the motions. Skip It.