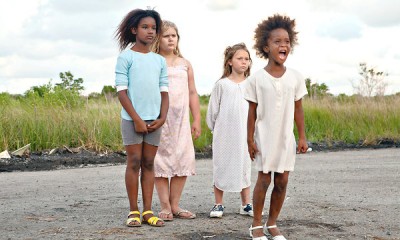 Beasts of the Southern Wild is a movie that sneaks up on you, and then wrecks you. It's a wildly unconventional picture, light on plot and heavy on mood; it introduces its characters, dithers around with them a while, observes them, joins them in their flights of fancy. Director Benh Zietlin is less interested in notions of routine narrative than he is in creating a feeling, a tone, one that is carefully crafted and impeccably sustained. It is, for a long time, a film that seems to be amiably going nowhere, until it arrives. Boy, does it ever.

Its protagonist is six-year-old Hushpuppy (Quvenzhané Wallis), who lives with her daddy Wink (Dwight Henry) in "the Bathtub," a fictional Louisiana floodplain on the wrong side of the levee. Hushpuppy is tiny but fierce, stubborn and independent--and she has to be, since Wink is prone to disappearing for days on end, then reappearing groggily, wearing a "dress" (hospital gown) and "bracelet." Wink spends much of his time with Hushpuppy teaching her how to be strong, how to take care of herself, and for good reason: he's sick, and who knows how much longer he'll be around, particularly after an especially mighty storm floods the Bathtub and leaves him weakened.

This information is parceled out off-handedly, in asides and unspoken consideration, and that is key; this is not a film about a girl and her dying father, any more that it is about much of anything predetermined or formulaic. It is about these people, and this place, and the things that happen to them there. It is a story told in episodes and vignettes that seem only vaguely connected, yet are slowly and subtly accumulating into a full portrait; its two important characters are seen in moments and flashes that are more instructive than any number of searching monologues. The performances by Wallis and Henry are both remarkable, in very different ways--his line readings are often animated, and her mug is a model of stern resolve, yet you can't catch either of them "acting," not for a second.

They live lives of astonishing poverty, which is observed but not fetishized; the film has something of the anthropological spirit of Alma Har'el's extraordinary (and underseen) Bombay Beach, and some of that film's unlikely aesthetic beauty as well. Ben Richardson's remarkable photography has been rightfully lauded (it won the film a Cinematography Award to go with its Grand Jury Prize at Sundance this year), and while there are flashes of visual surrealism abound, there's a casual, observational quality to the imagery that recalls the early works of Terrence Malick, David Gordon Green, or Charles Burnet. But about halfway through, you stop drawing parallels to those films, because it has become abundantly clear that this is a true original.

The closing passages of Beasts of the Southern Wild are indescribable--a word used not as hyperbole, but as legitimate explanation, i.e., I can't describe what Zietlan does at the end of the film, and what it does to me. As a not-infrequent moviegoer, I find myself particularly immune to the manipulation of so-called "tear-jerkers"; I see what they're doing, and see through it. Yet this film's last reel made me weep, in a way that was frankly difficult to contain, and thus slightly embarrassing. This is a powerful and striking work, a no-kidding piece of cinema art. "No cryin', hear," Wink orders Hushpuppy, in the midst of it all. "No crying," she replies. Good luck, moviegoers.