Wordgirl: The Rise of Miss Power 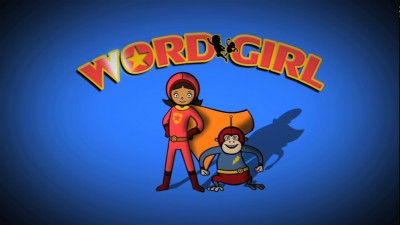 
The Show
I will not lie: I enjoy watching television with my daughter. We watch a bunch of different series together, everything from Big Time Rush to Pee-Wee's Playhouse, Sesame Street to The Aquabats! Super Show!. I love that she's embraced the series I watched as a child, and that she's embraced modern shows I can watch with her without being brutally bored by them. But unfortunately, too frequently, the shows on PBS, a channel I like to support, just don't do it for us. Too many of them are too cutesy or too focused on teaching, leaving their entertainment value too low to keep our interest. Though we've long enjoyed the real-world experiential learning of Fetch!, we were missing a real educational show, until we came across Wordgirl and her small-screen language lessons.

Produced by Soup2Nuts, the animation house behind Dr. Katz and Home Movies, Wordgirl is the story of 10-year-old Becky Botsford, the Earth alias of an alien from the planet Lexicon. On this planet, she has superpowers, and she uses them to battle supervillains who threaten her adopted hometown and correct the bad grammar of those around her, aided by Captain Huggy Face, her monkey sidekick. Of course, she has to protect her identity as Becky, despite never wearing a mask as Wordgirl, and coincidentally having a pet monkey, just like everyone's favorite word warrior. Along the way, she'll use a few key vocabulary words, in much the same way as Pinky Dinky Doo, just in a less obvious manner, keeping the focus on the fun. 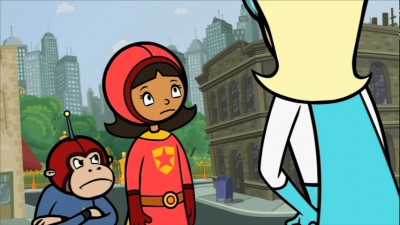 This DVD offers up two episodes of Wordgirl, minus the games and interstitials found on the regular episodes. The first, the double-length "The Rise of Miss Power," introduces another superpowered alien, the bullying Miss Power (given typecasted voice by Jane Lynch), who comes to Earth and tricks Wordgirl into thinking she's mentoring her. Bullying is a pretty serious topic, but somehow, when it's supervillains like The Butcher or Dr. Two-Brains getting bullied, it's pretty funny. That the show is peppered with the voices of several fantastic comedians, including Patton Oswalt (wonderfully cast as a geeky villain), Maria Bamford, Tom Kenny and H. Jon Benjamin, just makes it that much better.

The second episode is "A World Without Wordgirl," the Wordgirl take on the classic "I wish I was never born" story, as a rough day of crime-fighting on her birthday leads Becky to wish that Wordgirl never existed. The kooky new world, led by her nemesis Chuck the Sandwich-Making King (again, given perfect voice by Fred Stoller), assisted by a Boss Hogg-like version of The BUtcher, makes Wordgirl wish she never made her wish. Both stories are entertaining, and though they both have lessons, and some new words for kids to learn, they are never heavy-handed.

A third "episode" is also included, but it's not a Wordgirl episode. "The Pretty Princess and Magic Pony Power Hour" is a 10-minute adventure that was threaded through the segments of the double-length "The Rise of Miss Power," taking the place of the usual episode extras. A rather silly little cartoon about the power of storytelling, it sees the Pretty Princess and her sidekick the Magic Pony on an adventure that's changed and manipulated by a lute-playing narrator. It's not as interesting as the Wordgirl stories, but the animation is pretty vivid and there's enough going on to be entertaining to most viewers watching. 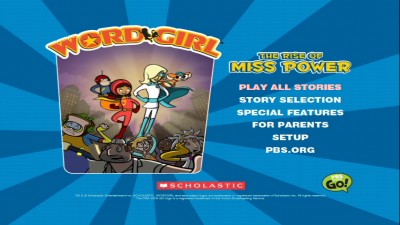 The DVD
Three stories, totalling 70 minutes of content, arrive on a DVD, packaged in a standard-width keepcase. The disc has a static, anamorphic widescreen menu, with options to watch the shows, check out the extras info, adjust the set-up and see info for parents. There are no audio options, while subtitles are included in English SDH.

The Quality
The animation style of Wordgirl, with it's thick outlines, cute models and muted backgrounds, is reproduced nicely in these anamorphic widescreen transfers, which capture all the color the series has to offer, along with a level of fine detail that lets you enjoy the attractive background art. There are no issues with pixelation along the black outlines, and no notable problems with compression artifacts. Overall, a very nice presentation.

The Dolby Digital 2.0 audio is what you'd expect for a non-surround kids cartoon soundtrack, letting you hear the dialogue clearly and separate from the music and sound effects. There's nothing dynamic about the mix, which keeps things center balanced.

The Extras
The extras are only accessible through the DVD-Rom drive on a computer. Up first are a pair of flash games, which can be played on a Mac or PC. First is the "Huggy Dance Game," where you're given a set of three words, and pictures of Captain Huggy Face, and you have to match the word to the correct face. (Regular viewers will recognize this as one of the in-episode games.) Get three right, and you can watch Captain Huggy Face dance. There are three rounds, and the words are difficult enough to make it interesting to young viewers, though oddly, on the final word, all three of the pictures were the same.

The second game is "Power Words," which offers four animated situations against super bad guys, where you have to pick a vocabulary word to help her out. Though they are well constructed and amusingly animated, twice the games froze up, which would be frustrating for younger players.

Also on the disc is a set of 10 coloring pages you can print out and color, natch, while for parents, there are a few PDFs available by putting the disc in a computer, with info on the Wordgirl character, a four-page set of character descriptions and an FAQ about the series. There's also a page on the DVD with weblinks related to the show. 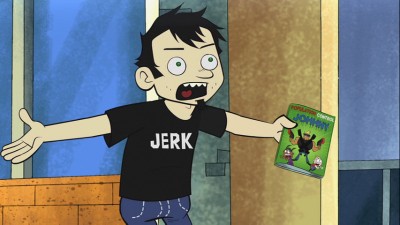 The Bottom Line
Wordgirl is one of the better PBS Kids offerings out there, thanks to the mix of educational value and superhero action, not to mention all the enjoyable comedians providing voices. Though the show is entertaining, the DVD only gives you two episodes to enjoy (along with a tangentially-connected short) and no on-disc extras. At least the quality is good and the cost low, so you can't feel frustrated or perplexed.