PBS // Unrated // July 24, 2012 // Region 0
List Price: $24.99 [Buy now and save at Amazon]
Review by Stuart Galbraith IV | posted July 9, 2012 | E-mail the Author
When asked recently by a friend for some British television recommendations, on the list I provided was Inspector Morse (1987-2000), the series adapted from Colin Dexter's novels and which starred the irreplaceable John Thaw in the title role. "Oh, I really don't care for British mystery shows," was his response. This prompted a long reply in which I tried to explain that the Morse films really weren't whodunits in the conventional sense. The mysteries were almost irrelevant except insofar as their investigation impacted Chief Inspector Morse himself, personally. The show was about him, his character, his relationships with women (often suspects), his superiors, and especially his junior partner, Detective Sergeant Lewis (Kevin Whately).

Though Dexter's novels were popular, it was the TV adaptations of his stories, and particularly John Thaw's portrayal of Morse, both of which deviated slightly from Dexter's original concepts, that made Inspector Morse a worldwide success, the 33 feature-length television films popular even here in far-flung Japan. The death of Inspector Morse in the final episode of the series, coupled with the equally untimely death of John Thaw soon after, under not dissimilar circumstances, further immortalized this endlessly fascinating, enigmatic character.

Ultimately, viewers just couldn't get Inspector Morse out of their heads, any more than, after hearing it once, one could forget the series' haunting end titles theme.

In 2006, an ingenious follow-up series debuted, Lewis. Instead of beating a dead horse, trying to continue Morse without Morse (as the Scottish meat-and-potatoes cop series Taggart has done successfully for decades), Lewis became a clever character inverse of Morse, with an older, world-weary Lewis now paired with a much younger, troubled intellectual, not Morse at all, but which effectively turned the basic concept on its head with very interesting results. And, even in death, the character of Inspector Morse haunts Lewis in subtle, at times almost subliminal ways, much as one can't ever shake the lasting influences of a deceased close friend or relative.

Endeavour (2012) is yet another spin-off of Morse, a prequel from the same production company, this time starring Shaun Evans as Detective Constable Morse at the beginning of his career, in 1965 Oxford. Written and created by child actor-turned-television writer* Russell Lewis (also of Inspector Lewis), Endeavour is less successful than Lewis. The mystery holding it all together is not compelling, and attempts to elucidate Morse's backstory are sometimes a little too pat and/or at odds with the basic appeal of the character.

What made Morse so interesting was that his highly-opinionated, flawed genius was accompanied by an emotional isolationism, a painful and mysterious past, which Lewis and others only rarely and fleetingly caught glimpses of. Those rare moments when Morse let his guard down to tell Lewis something about his past are among its most memorable moments.

A series that purports to explain everything about Morse might easily puncture the mystery of the character as surely as worn tires driving over a fallen crate of nails on the highway. It's a little hard to imagine this series appealing to audiences not already familiar with the Morse character, but for them there are endless references.

The 2012 television movie (subsequently followed by a series) is being released in the U.S. by PBS. Regrettably, for review purposes they sent us only that bane of home video reviewers, the unmarked DVD-R in a paper sleeve. While the feature is 16:9 enhanced widescreen, there are no menus, no extras, no nuthin' making it really impossible to assess anything much beyond the show itself. However, as with the PBS broadcast and early video versions of Lewis, it does appear that this release will be cut. The version that first aired on British television ran 98 minutes, but this runs 89 minutes. Buyer beware. 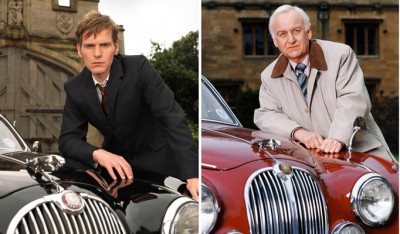 Endeavour Morse, Oxford dropout, returns to that city when as a young detective constable from Carshall Newtown he's temporarily assigned to the Oxford branch, to offer menial support of a large, ongoing investigation surrounding the disappearance of a 15-year-old girl.

Morse's familiarity with Oxford, his passion for crossword puzzles and opera serve him well: a daily local crossword puzzle holds several important clues, while one of the suspects is a retired operatic soprano (Flora Montgomery). Working independently for the most part, he's able to move the case forward in ways his more experienced superiors cannot. This impresses Detective Inspector Fred Thursday (Roger Allam), who recognizes Morse's talents, while upsetting the balance of power for others, especially irascible Det. Sgt. Arthur Lott (Danny Webb).

The show abounds in references to the original Inspector Morse. The editor of the Oxford Mail is portrayed by Abigail Thaw, John's daughter (there's some resemblance) and for no particularly reason she wonders aloud if perhaps she and Morse had met. "Another life, then," Morse responds. Morse's university friend is the same character played by actor Barry Foster in an episode of the original series, and the original series' first pathologist, Max de Bryn (Peter Woodthorpe), is reintroduced here, now played by James Bradshaw. Morse's admires Thursday's black Jaguar Mark I, and later Morse's iconic red Jaguar Mark II is glimpsed at a dealership. As he did on the original series, writer Colin Dexter makes a cameo appearance, and the script has its share of other in-jokes, such as naming the young policemen assigned to Oxford after the original series' writers and directors: Danny Boyle, John Madden, Kenny McBain, etc.

Thankfully, Lewis's script doesn't attempt to explain away all of Morse's quirks. For instance, Morse's pronounced limp (actor Thaw broke his foot as a child) is not at all present here, perhaps with the thought of introducing it in a later episode. Unlike the moving forward of Lewis, trying to go backward in time for what amounts to Morse: The Early Years is much tougher to pull off and some ideas, such as introducing Morse as a teetotaler who falls under the intoxicating spell of British ales after attending his first autopsy, is borderline silly.

However, the character of Morse wins out in the end. Like the recently modernized Sherlock Holmes, Morse is endlessly interesting and pliable to myriad interpretations. Shaun Evans doesn't much resemble Thaw when he was Evans's age, but squint just right and one can see Thaw lurking in there somewhere. From a production standpoint, Endeavour is well made with Inspector Morse composer Barrington Pheloung's music a welcome addition. The program features some clever non-linear editing near the end, and an epilogue that even includes a cameo of sorts by John Thaw himself.

As noted above, for Endeavour PBS sent us only a DVD-R with no menu screens and no Extra Features, making an assessment of final product impossible at this point. However, the shorter running time may be a disturbing indication that the show will be cut by upwards of ten minutes.

For Inspector Morse followers more than general British TV mystery fans, Endeavour isn't as good as Lewis, at its best, but it's not a bad start, either, and as a continuing series it has modest potential.

* As a child performer, Russell Lewis appeared in Tales That Witness Madness (1973), newly released to DVD and Blu-ray.