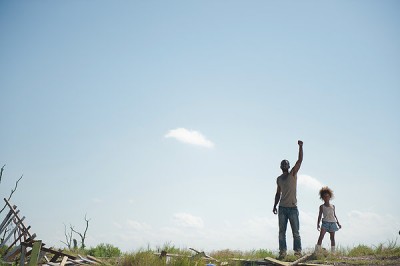 The new film Beasts of the Southern Wild is set in an indeterminate future when the sea levels have risen and covered much of the coastal U.S. (Or so we gather from the brief glimpse of a map we are given.) To fortify the remaining "dry" country, the government has built a levy to hold back the ocean. Below that is an area now commonly referred to as "the Bathtub," a small patch of land that didn't sink. It is still inhabited by the poor, the drunk, and the stubborn, and when it comes to a lot of folks, they might be all three.

Wink is such a person. He lives in a rundown shack with his daughter, Hushpuppy. Beasts of the Southern Wild is her story. The father and child are played by Dwight Henry and Quvenzhané Wallis, non-actors. Like much of the movie's cast, they are common citizens from the Louisiana bayou, where the movie was shot. It's a Neorealist approach to a magical realist movie. The combination clicks, even if the movie doesn't.

Beasts of the Southern Wild is Hushpuppy's story. Her mother left at some point during the initial flooding. Daddy drinks and is suffering from a debilitating illness, and he's probably more than a little mentally ill. He has created a semblance of a homestead for himself and Hushpuppy, complete with pigs, chickens, and dogs. The people in the Bathtub make the most of their existence, throwing regular holidays and living life like a drunken party. Hushpuppy thinks it's the greatest place to live in the world. It certainly stokes her imagination, which she indulges in regularly. She believes she can hear coded messages being passed between the animals via their clucks and grunts and even their heartbeats. There are many elements of Beasts of the Southern Wild that we are never quite sure are real or just something Hushpuppy is dreaming up. Midway through the movie, the storms return, and there are cutaways to visions of the ice caps crumbling and prehistoric boars being freed from their frozen graves. Are they really coming to reclaim the land or is it all just Hushpuppy's fantasy? 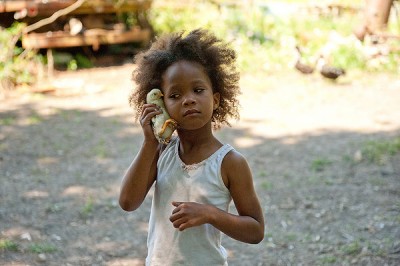 This is the feature debut of director Benh Zeitlin, who also co-wrote the script with Lucy Alibar, whose one-act play served as inspiration for the longer story. Together, they build a complete universe, one with its own ramshackle aesthetics, rituals, and myths. There are some favorable comparisons to be made to Terry Gilliam's better pictures, and also some unfortunate ones to be made to his worst (the execrable Tideland). The otherworldly atmosphere and the way Hushpuppy's narration frames the events evokes the oral tradition and the folklore of the American South. There is also a light smattering of political allegory, of the haves and the have-nots and the compassion or lack thereof of the government at large. Though the citizenry of the Bathtub is diverse, the rescue teams are decidedly not.

It all makes for a rather interesting feature, albeit one that never quite engages as much as it should. I was bored and fidgety through most of Beasts of the Southern Wild. I wanted to like it. Both Henry and Wallis are compelling to watch, and the off-balance father/daughter dynamic (Wink regularly goads Hushpuppy to declare, "I'm the man!") is the best part of the meandering plotline. The movie is also wonderful to look at. Cinematographer Ben Richardson shoots off the cuff, often swaying and probing his way through scenes, but his sense of lighting gives Beasts of the Southern Wild a glossy sheen. Then again, maybe that's the problem. The beauty of the images is almost earnestly insistent, pushing us to think that there is more here than there really is. Most of the characters are base types and get very little personality development, and the themes of death and rebirth lack any meaty exploration. Zeitlin pours any sense of drama he has into the overbearing music, which he also composed with Fire Flies' frontman Dan Romer. The director lets the mawkish orchestration do most of the emotional work and resorts to an almost insulting level of bombast for the finale. Is it that he doesn't trust his own script to sell it, or he doesn't trust the audience to "get it"?

Maybe I'm being too harsh on Beasts of the Southern Wild. It actually makes me think of another recent indie debut, Evan Glodell's Bellflower, in that it's a movie that shows a lot of promise and that the majority of critics and viewers seem to like better than I did. It's not that I think either film is particularly terrible or fail to see the effort Zeitlin and Glodell put into their respective work; on the contrary, I see enough promise that I want them both to make better movies next time around. If we forgive the first-timer mistakes simply because they were sincere about making them, it just gives them license to keep doing more of the same.

I wanted to like Beasts of the Southern Wild, I didn't, and I don't want the same thing to happen when Benh Zeitlin makes his next picture. Rest assured, though, I'll be in the queue waiting to find out how it goes. 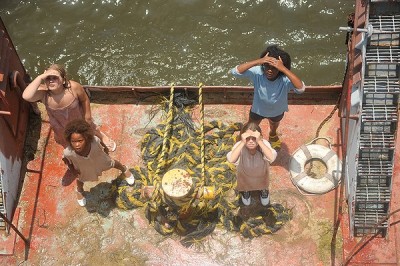