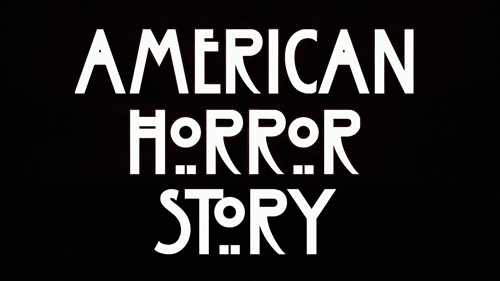 American Horror Story is one of the strangest television creations in several years. If that makes it sound like something that immediately piques your interest... feel free to read on. Otherwise, I'm not so sure. This is bizarre television right down to its core. Is it a weird show, you might wonder to ask? That's not even "half of it" with this show. American Horror Story is bizarre, creepy, and scary but it is also a drama series with a central focus upon its cast of characters.

From the creators of Nip/Tuck and Glee (weird?!) comes one of the most unusual dramas on TV currently being made; a series that combines massive family dysfunctions with haunted house spooking and horror that makes for one of the most chilling network television series around.

The premise of the show is intriguing even despite its simplicity: this is a series about a family falling apart due to the infidelity of the husband and father, Ben Harmon (Dylan McDermott), who decides the best thing for the family is to move into a new home in a new city to try and recover from these past issues. Of course, the new house they selected happens to be one of notorious fame (that none of them are even remotely aware of at the start of the series) as it usually is referred to as the "Murder House" in passing. There's a guide tour of messed-up/ haunted houses in the community and the house this family winds up in actually might be ranking last place.  In other words: the plot is about a family moving into a haunted house. Essentially, that's the foundation for the entire show's first season plotlines to unravel out.

Why the title "Murder House"? Maybe it has something to do with the fact that everyone else who has lived in that house has died there. Usually by being murdered (even by ghosts). The Harmon Family wanted a fresh beginning but instead found themselves having the absolute worst possible living situation possible: inside of the creepy haunted house with the worst murderous history; a home that is essentially a nest for ghosts that died there before the Harmon's own family residency. 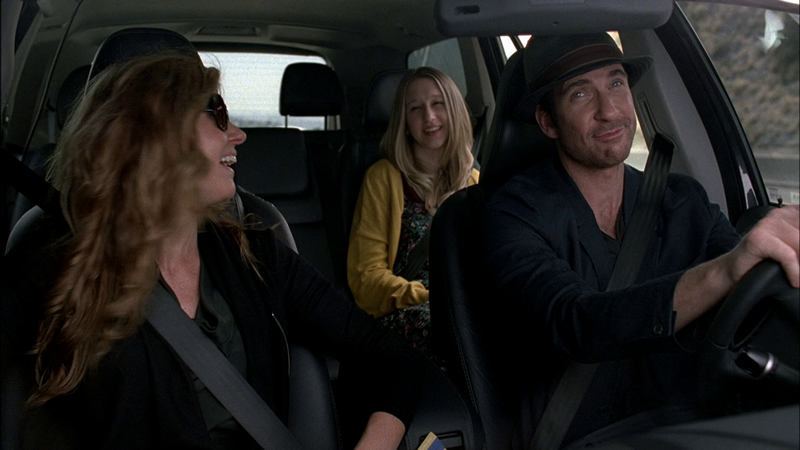 This show is truly bizarre. Every episode is a head-spin with the way the story unravels and the way these characters keep finding themselves in even more unusual circumstances in each and every note of the episodes: as the show drifts along its unusual dramatic-horror infused hybrid series you wonder constantly where things might be heading but are never able to get a clearer grasp of what the writers are doing. This is pretty much par the course for the entire season of episodes. If you want to watch a generally unpredictable and offbeat show then this is one that fits that bill from the beginning.

The acting is phenomenal. This is probably the greatest strength the series has going for it as it definitely benefited substantially from having such an interesting cast for these parts. As noted, Dylan McDermott does a fantastic job in the role of Ben Harmon. He's truly messed up as both father and husband to his family but he's someone that seems to want to do something right and help his family too. It makes the character interesting to say the least.

Connie Britton does excellent work as wife and mother Vivien Harmon. She's a huge asset to the show. Vivien is trying to be there to help repair her family too. As an actress, Britton finds the quiet moments to make her character seem more compelling than what the scripts sometimes even called out for and that was something that proved beneficial to the series.

The daughter, Violet Harmon, is performed by Taissa Farmiga (who, by the way, is apparently related to Vera Farmiga - her older sister and fellow actress). She made what could have been some kind of throwaway teenage role one of the most compelling the series had to offer. She matched both Dylan McDermott and Connie Britton in terms of excellent acting. 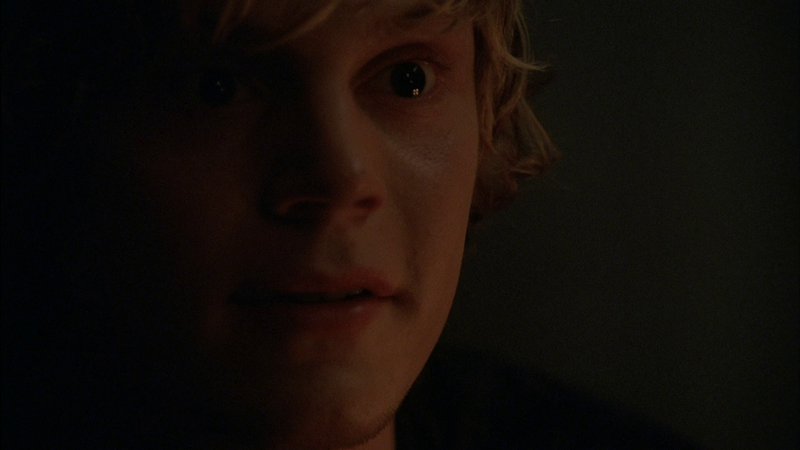 The show-stopping performance is unsurprisingly from Jessica Lang (who won both a Golden Globe and an Emmy for her performance on this series). Lang portrays a neighbor: Constance Langdon, one of the most unusual neighbors you will ever find in any film or television show. That character is somehow involved (directly or indirectly) with a huge number of the deaths happening on this series. The character is eerie and yet seemingly ordinary all at once. She's certainly one of the more unusual characters to arrive on American Horror Story and a good reason to see it. Of course, Lang benefits from the roles performed by those portraying her family: Tate Langdon (Evan Peters) is her psychotic and delusional son, Adelaide (Jaime Brewer) is her mentally-impaired daughter. All of these parts and performances prove to contribute to a significantly more troubled family unit than the Harmon's.

The flip-side to the positive elements of this series is that this season has concluded the series without provided a perfect resolution (at least in my opinion) but it was significantly better at reaching a conclusion than most horror fare. There's also the fact that American Horror Story seemed to jump around story-wise so much sometimes that it couldn't seem to even decide if storytelling on the show was more about the characters or the beyond-weird scenarios and the series would have been better if it had decided how to balance the drama and horror elements even better.  Some may shrug at that kind of complaint, but a series as well-made as this one could have benefited in finding even greater balance in storytelling.

I was hoping for this series to be more of a drama with horror elements (which some might say this is), but I thought it veered sometimes into horror for the sake of scaring an audience more frequently. This was a detractor for me but it wouldn't be for serious horror aficionados who undoubtedly will love this bizarre show. It's one of the few horror series that is actually good: joining The Walking Dead, Tales from the Crypt, The X-Files, and maybe just a few others in television history.

American Horror Story is an entirely unique creation and one that will undoubtedly please the majority of horror / genre television fans. The performances are solid; the writing tends to be good, and the directing (which includes some of TV's finest working directors) is always an interesting part of the whole. This is a well-made series. As far as the production aspect is concerned, this show falls in line with a select few series that are cinematic. It's not really "perfect" as it hits a lot of the conventions that I dislike about much of the horror films in production today in general (sometimes it's too gruesome for me and it really pushes the conventions of what can be done in television), but because this series actually creates interesting characters and avoids those paper-thin personalities that tend to reside in the genre it excels in fascinating ways more unique than most would expect. 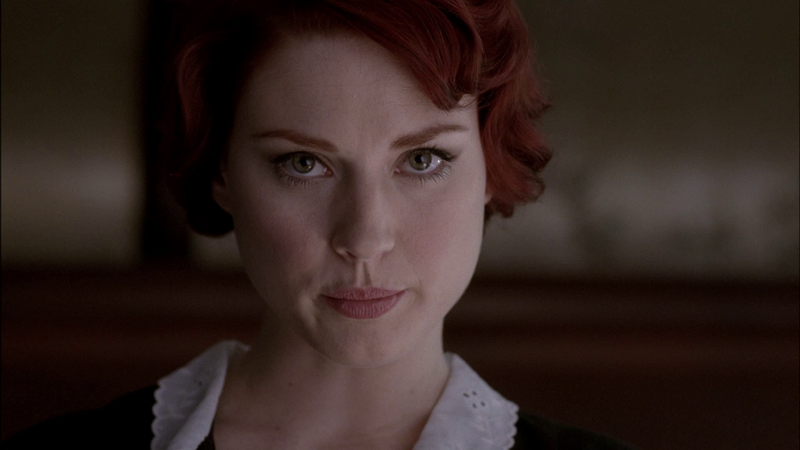 American Horror Story joins the ranks of the finest looking television series around. The show has some of the best cinematography around, and the 1080p AVC encoded transfers for each episode are capable of presenting this show in the best possible way. It's an incredible show production-wise. You will be astounded by how crisp the High Definition picture quality is. Filmed in 1.78:1 and with the use of actual film stock, the series is one of the few still using traditional filmmaking techniques.

American Horror Story has a 70's horror vibe with the delicate amount of film grain inherent in the series visual look (thanks to the creative decision to shoot on film), and everything seems weirder as a result. It seems appropriate for this type of series.

The 5.1 DTS-HD Master Audio is excellent at adding another layer of weird dimensionality to the mix when needed: even if it isn't as engaging as a theatrical sound design (unlike the video quality, which never feels like a television show at all, and is much more cinematic).

The sound creates a more enveloping feeling when it is needed. The series certainly has moments like these in specific scenes. However, the bulk of the show seemed to be front-channel specific because of the number of scenes that are more character-focused and less about possible "chills". This is pretty much par-the-course for television and isn't that big of a surprise despite. It's just nice to have the sound with lossless audio, crisp dialogue, clean score music, and the occasional dramatic and/or scary scene that is heightened from the surrounds when needed.

There aren't many supplements included on this release, but what is included will be of some interest to fans. First up is Audio Commentary on the Pilot Episode with writer/creator Ryan Murphy.

The following featurettes are included:

The Murder House (6:35) is a brief history lesson in the horrible past of the haunted house. Presented by the "Eternal Darkness Tours of Hollywood".  You guessed it... it's a fake one.

Overture to Horror (9:12) is all about the creation of the series creepy & bizarre title sequence.

Out of the Shadows: Meet the House Ghosts (15:10) is a collection of interviews featuring the ghosts who live inside of the "Murder House". 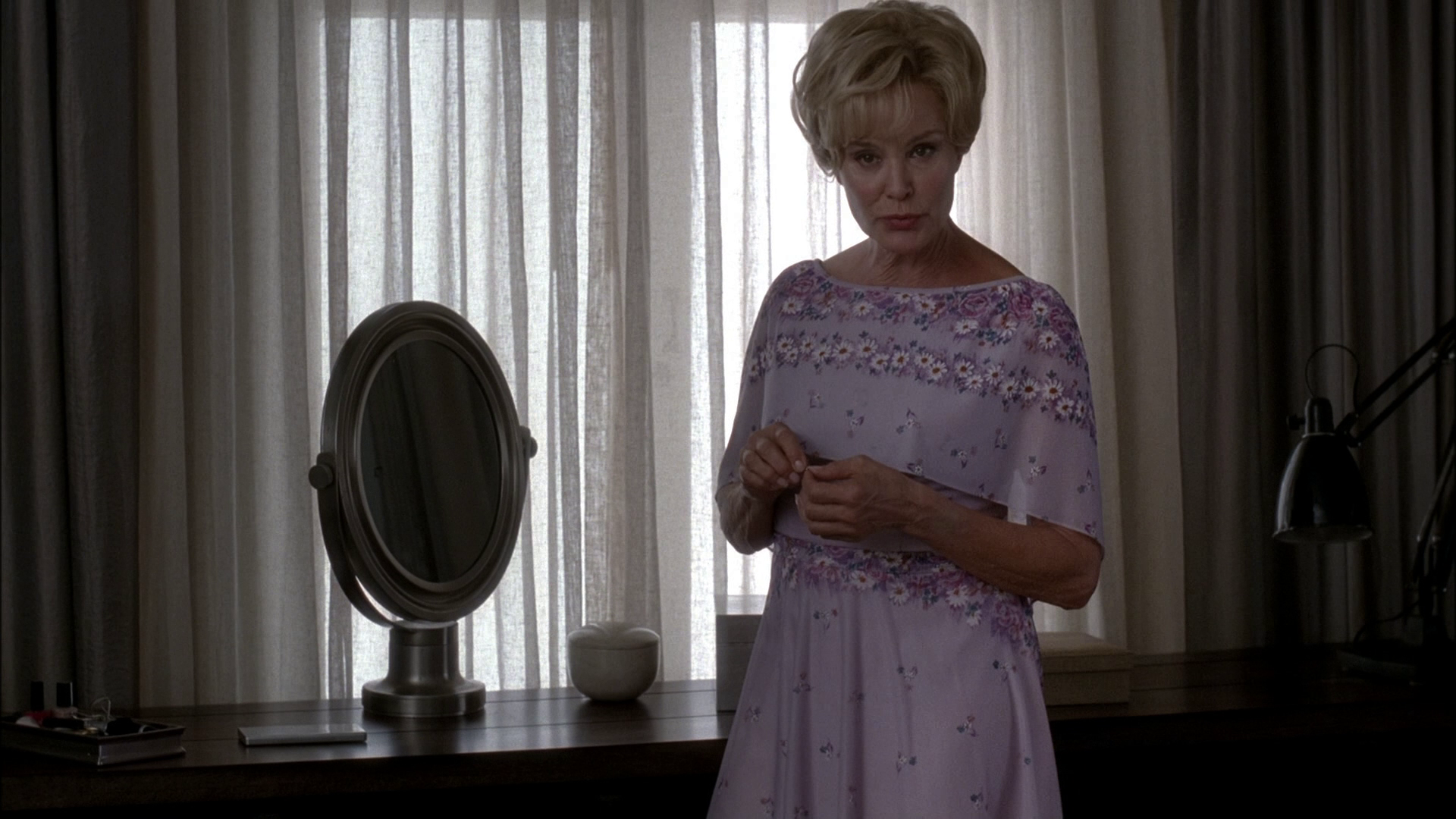 American Horror Story joins the ranks of The Walking Dead as one of the latest successful series on television to blend the horror and drama genres, and it should appeal to audiences looking for something a bit spooky, weird, and offbeat that still provides actual storytelling, characters, and some added dimensionalities. This isn't a flawless series, but it does succeed more often than it fails and viewers interested in seeing something spooky this Halloween will likely enjoy it (so long as they can stand how over-the-top and/or disturbing the series can often become). This series is too gruesome sometimes. I imagine many viewers would have wished for it to actually be toned down. Yet of course, most horror buffs will scoff at someone who isn't a "horror aficionado" saying such things.