Yeomen of the Guard, The

The lavish live TV mounting of Gilbert and Sullivan's operetta The Yeomen of the Guard stands as a good example of what the so-called "Golden Age of Television" was all about. This April 10, 1957 presentation of Hallmark Hall of Fame has a terrific cast, fluid direction and all the earmarks of a classy production. Audiences of the day were probably more inclined to tune in to wrestling or Father Knows Best, but I'd like to imagine that those who did choose to watch found themselves thoroughly entertained by this candy-colored treat. The DVD editon from Video Artists International (VAI) uses a black and white kinescope of the program, which mutes some of the visual splendor but none of the frothy music score or delightful performances.

Set in Shakespearean England, The Yeomen of the Guard's story mainly concerns Colonel Fairfax (Bill Hayes), a debonair soldier who has been sentenced to death on a sorcery charge. Fairfax is determined to not let his accuser cousin inherit his wealth, so he conspires with Sergeant Meryll (Norman Atkins) to marry a woman whom he's never met before - Elsie (Barbara Cook), a fetching traveling singer. The move comes as a surprise for Elsie's companion, a wise and sardonic jester named Jack Point (Alfred Drake). It's also disappointing to Meryll's daughter, Phoebe (Celeste Holm), who was pining away for Fairfax. By the end of Act I, Sergeant Meryll has arranged to smuggle Fairfax out of prison. With the now clean-shaven Fairfax being passed off as a Meryll family relative, the entire community is on the hunt for an escaped fugitive who's right under their noses. Meanwhile, Jack makes a deal with rotund guard Wilfred (Henry Calvin) to lie about Fairfax's whereabouts in exchanged for getting an education in the jestering tricks of the trade (their duet on "The Tale Of Cock And Bull" is one of the more wordy, quintessentially G&S moments here). Wilfred is also in love with Phoebe, who is broken up over Fairfax, who finds that the charming Elsie might make for a suitable wife. Somehow all this leads up to a triple wedding, although the operetta closes on the dejected Jack literally left in the dark - an unusually somber ending for Gilbert and Sullivan.

This production of The Yeomen of the Guard condenses Gilbert and Sullivan's libretto into a tidy 79 minutes, with choruses and lines of dialogue cut or abridged to fit the broadcast running time. Considering that it was all done live, it's quite an impressive feat. The performance utilized only a few cameras on a multi-level set, with fluid, subtle transitions between scenes and a cast that seemed well-rehearsed (best of all, they actually appear to be having fun). Director George Shaefer, who also helmed about a million made-for-TV movies in the '50s, '60s, '70s and '80s, did an excellent job in keeping things lively and entertaining. The tricky, complex material and the live TV aspect open up the potential for things to go wrong, although the only gaffe I noticed came when Celeste Holm had to do some extra business to keep a prop staff from falling over. Although I was initially under the impression that this telecast was adapted from a Broadway show, it is in fact a unique, one-time performances made especially for this telecast - which makes it all the more laudable.

Another unique aspect to this production lies in the ace casting. Celeste Holm might be better known for dramatic roles in films like All About Eve, but this performance is ample evidence of her singing abilities (remember, she originated the role of Ado Annie in Oklahoma). Her enthusiasm is nicely matched by her one-time Oklahoma co-star, stage pro Alfred Drake. Unlike Holm, Drake didn't do much film work - his likability and naturalness as Jack demonstrates his ease with this challenging material. The Yeomen of the Guard also has some great stuff from the comedic Henry Calvin (best known for his role in Disney's Zorro series) and Broadway legend Barbara Cook, seen here when she was just starting her extraordinary career. 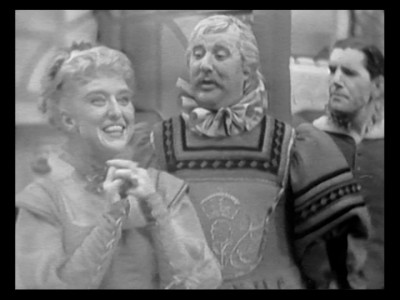 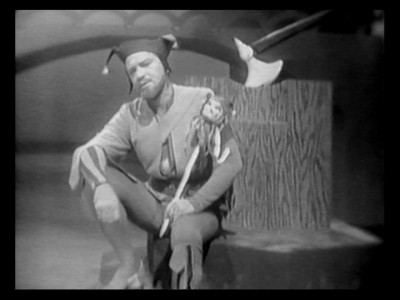 VAI's DVD edition of The Yeomen of the Guard was mastered from a kinescope stored at UCLA's Film & Television Archive. The 4:3 black and white image is blurry and subject to the usual waves and lack of contrast seen on kinescopes, but it's an adequate presentation with decent mastering.

The telecast's original mono soundtrack gets a little shrill at times, but overall it's a surprisingly robust, good sounding mix. No subtitles are provided.

Since The Yeomen of the Guard was a Hallmark Hall of Fame presentation, VCI has included the telecast's original commercials on the disc as a bonus "for fans of vintage television". In three segments totalling nine minutes, the ads shill Hallmark's product line for the Easter 1957 season, including secular and religious greeting cards and wrapping paper festooned with flowers and bunnies. A 10-minute More from VAI featurette, showing highlights from the company's other offerings, rounds out the extras.

1957's The Yeomen of the Guard was a smoothly executed Gilbert & Sullivan musical extravaganza captured on live television. It must have been a gas seeing this in color as it was originally broadcast, but the black and white kinescope preserved on VCI's DVD edition is still a good opportunity to catch stage performers (like the talented Alfred Drake) whose work isn't normally available. Recommended. 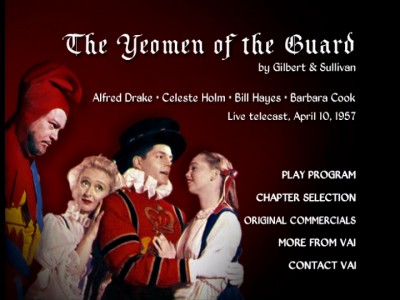 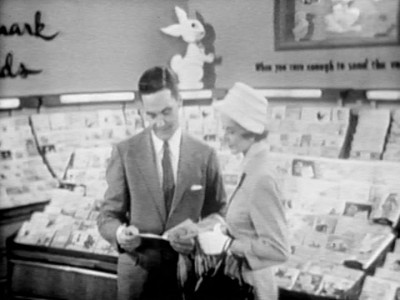