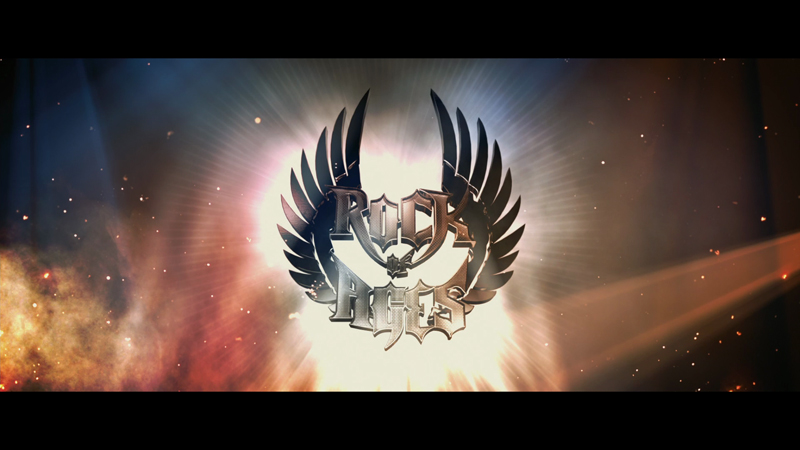 
The Movie
If someone was going to make a movie with the intent to entertain Francis Rizzo III, they could do a lot worse than to take the music of the '80s, craft a musical around it and then populate it with actors like Russell Brand, Alec Baldwin, Malin Akerman and Paul Giamatti. In fact, if you told me that movie was coming to a theater near me, after coping with the fear that Hollywood found a way to burrow into my brain and remove my dreams, I would be making plans to wait on line. Yet, somewhere between freeing this concept from my skull and splashing it across the big screen, something went dramatically wrong. Everything fun somehow was cut, and it was replaced with karaoke.

Based on the Broadway jukebox musical (the kind of show that starts with popular music and then builds a story around it,) Rock of Ages is a blend of three stories. First up is the cliched love story, with Sherrie (Julianne Hough), a girl fresh off the bus in Los Angeles with a rock 'n' roll dream, and Drew (Diego Boneta) a rocker with a dream of making it big one day. They might just make it if they get past the hurdles in their way, which you can probably guess with a high rate of accuracy (bonus points if you can predict Sherrie's career path.)

There's also your standard "we gotta save the club!" storyline, direct from Breakin' 2 or UHF (yet somehow, they forgot to put in the fundraising bit.) Here, Dennis, the owner of The Bourbon Room, played with gruffness by the great Baldwin, is struggling to keep his club in the face of financial problems and pressure from a group of conservative protesters led by Catheine Zeta Jones, and sees his opportunity to get through in the form of a final performance by the band Arsenal, led by rock god Stacee Jaxx (Tom Cruise), who's about to launch his solo career. Things don't go as planned though, thanks to the machinations of Jaxx' manager (Giamatti), and basically everyone ends up unhappy with their lot in life. This was probably about a quarter of the way into this lengthy two-hour film, which tells you what you're in for. 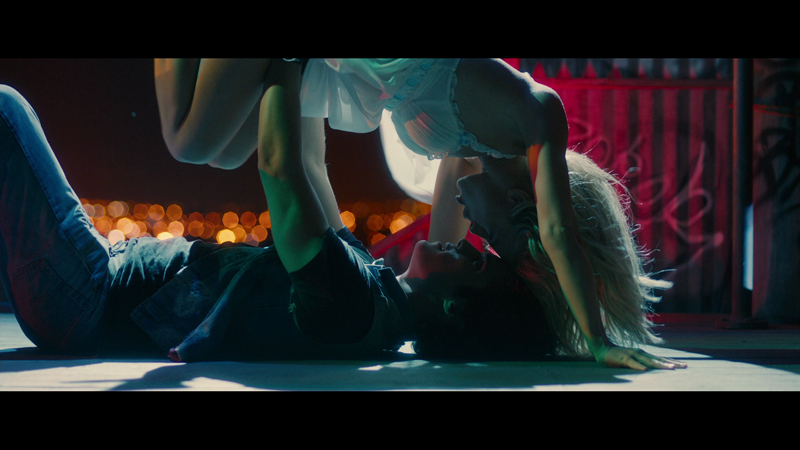 The key issue here, among several others, is a lack of joy and energy. When I'm watching a musical about the '80s, easily the most over-the-top and silliest decade of music culture, I am not looking for drama or earnestness. I want ridiculous fun, and that was what was missing from this film, for the most part. Yes, Cruise and Akerman managed to redefine Foreigner's "I Want to Know What Love Is" with their pool-table romp, and Baldwin and Brand share an enjoyable moment of confession via REO Speedwagon's "Can't Fight This Feeling", but for the most part, the numbers just aren't fun. Take for example a mash-up of Foreigner's "Jukebox Hero" with Joan Jett's "I Love Rock n Roll," sung by Hough and Boneta, that takes place in Tower Records. This should be a blow-out rocker, but it feels like a weak choir assignment from Glee. That the film and that show share music producers may be too blame for that feeling, along with the key role given to Journey's "Don't Stop Believin'," but the film still suffers because of it. That Hough and Boneta, cast in an obvious attempt to lure younger audiences, are about as far from rockers as you could ask doesn't help.

Pacing is equally as big a problem, as the movie seems almost nervous to spend much time without someone singing. Yes, it's a musical, but to stack songs up back-to-back-to-back doesn't allow a performance to be appreciated, and it also serves to point out the lack of story. If someone can explain exactly what Brand's character Lonny does aside from hanging out at the club, it would be appreciated. The only thing worse are the bits of story that hang around without reason, like Bryan Cranston's mayor character. They try to create this storyline where he's cheating on Zeta-Jones' Christian firebrand, but why should anyone care, considering how this has no impact on the story. (Which is besides the fact that making jokes about conservatives being hypocrites is plucking extremely low-hanging fruit.)

As disappointing as this film is, there are some positives, like Brand, Baldwin and Zeta-Jones, and the big one is Cruise as Jaxx. Though he seems a bit old to play the part of a rocker breaking out as a solo act (the film does at least establish his band as a long-running act), he has the serpentine metal lead-singer act down pat. The one thing that could have been better would have been a further exaggeration of his sexual energy, as seen when he magically forces Akerman's mouth open for a kiss and makes Zeta-Jones nearly climax with a single touch. One wonders if Cruise's best performances are when he brings a bit of his own legend into the role, as it is easy to see the celeb as a near-mystic wanderer, bored with existence and lost in his own mind, yet capable of incredible performances when called upon. Either way, there's no doubt about the quality of his acting, and the fact that he's just a small part of the film avoids overstaying his character's welcome.

This set includes an extended cut of the film, which runs 13 minutes longer, and includes a smattering of footage cut from the theatrical cut, including a longer version of the interview between Jaxx and Rolling Stone reporter Constance Sack (Akerman), which verges on interminable, and a dance/pseudo-sex scene between Cruise and Hough. Though the reasons why this coupling was cut are pretty obvious when you see it in the context of the film, it would have probably become one of the film's signature moments, as the heat between them as they sing and dance to "Rock You Like a Hurricane" is stronger than anything else in the movie. 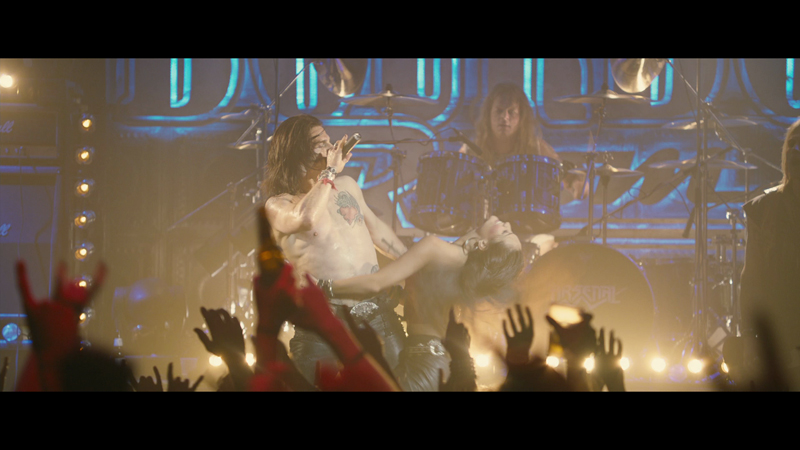 The Discs
The film arrives in a two-disc set, one Blu-Ray and one DVD, which are packed in a clear dual-hubbed Blu-Ray keepcase. The Blu-Ray features the very bland, static WB Blu-Ray menu, with options to watch the film, select scenes, adjust the set-up and check out the extras. An English DTS-HD Master Audio 5.1 track is available on both cuts of the film, while the Theatrical version also includes French and Spanish Dolby Digital 5.1 audio, with subtitles in English SDH, Spanish and French.

The Quality
The 2.40:1 1080p AVC-encoded transfer on this disc looks terrific, delivering the colorful eye-candy the '80s is known for in beautiful clarity, with rich, vivid color. Black levels are equally solid, and there are no issues with digital distractions. You can see tremendous details throughout the film, but all of this quality comes at a slight cost, as the film just looks fake. Yes, the costumes and hair, and especially the Bourbon Room looks great, but sets like Tower Records or The Venus Club have a flatness and emptiness to their designs, and the crisp image makes them obvious sets rather than possible locations.

Like the overall movie, expectations were not met in terms of the audio, as the DTS-HD Master Audio 5.1 track lacks the enveloping feel you want from a modern sound mix. The vast majority of the audio is delivered in the front of the room, with some slight enhancement in the rear speakers, and nothing noticeably dynamic about the mix. That's an unfortunate situation, since the sound and music is actually delivered well, just not in the surround field you'd expect. That the songs are much stronger than the dialogue is an additional issue, as a good level for speech will blast you out of the room when the singing starts any minute.

The Extras
This is one of those rare home video releases where the extras are more entertaining than the film, especially if you're a fan of '80s music. First up is a pair of featurettes hosted by Bret Michaels, originally of Poison fame, but more recently of reality TV infamy. Unfortunately, he hosts the featurettes with the style of a Time Life infomercial trying to sell you on how great the '80s were. Fortunately, that doesn't negatively effect the actually content. In "Rock of Ages: Legends of the Sunset Strip" (29:56) we get to hear from the veterans of the music scene featured in the film, including Pat Benetar and Sebastian Bach and members of Styx, REO Speedwagon, Twisted Sister, Quiet Riot, Night Ranger, Def Leppard, Winger, Whitesnake, Dokken, Foreigner, Poison, Journey, Warrant, Faster Pussycat, Vixen, Extreme and W.A.S.P. Covering the excess of the time, the style, the clubs and the differences between that era and today's music, it's a great oral history of the time and shows the personalities of the '80s biggest rockers.

Michaels is back with the 12:53 "The Stories We Sing," which allows some of the previous featurette's participants to reveal the inspiration behind their greatest hits, including Night Ranger's "Sister Christian," Poison's "Nothing But a Good Time," REO Speedwagon's "Can't Fight This Feeling," Journey's "Don't Stop Believin'" and Def Leppard's indecipherable "Pour Some Sugar on Me." It's a great idea for a featurette, and they threw in a story about when Tom Cruise met Def Leppard, which is a fine capper.

"Defining a Decade" is an eight-part behind-the-scenes look at the movie, hosted by Hough and Boleta, with an awkward, award-show-banter level of delivery that makes Michaels seem like Johnny Carson. Running 35:34, it covers pretty much all of the production effort, from the costumes and dancing to the sets and music, along with a look at the original Broadway show and its history. If having to see Hough and Boneta struggle with their hosting duties eight times isn't frustrating enough, there's no play-all option for these pieces.

The song "Any Way You Like It," featuring Mary J. Blige and American Idol cast-off Constantine Maroulis, was chosen to create a re-edited music video, because...

The final extra is a set of song stops, so you can jump to your favorite performance. Also included in the set is a code for an UltraViolet stream and download of the film. 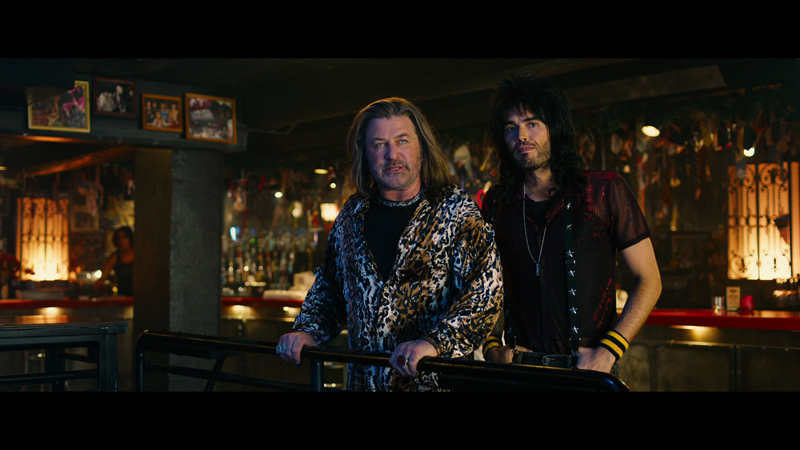 The Bottom Line
Perhaps my expectations were too high coming into Rock of Ages, but when you're working with such fun materials, in the form of a talented supporting cast and some of the greatest music the '80s ever produced, you need to deliver something more entertaining than the cliched love story we ended up with. On the plus side, the disc looks great and sounds pretty good, but the extras are where '80s music fans will want to direct their attention, as there's some good stuff here. You may not need to own this disc, but the total package is worth a look.