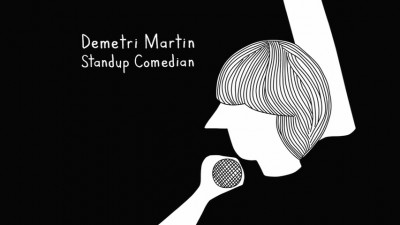 
The Story So Far...
Demetri Martin has become one of the better-known stand-up comics in recent years on the strength of his low-energy, minutia-obsessed comedy and his Comedy Central series Important Things with Demetri Martin. His first comedy special, Person. , was released in September of 2007, and DVDTalk has a review.

The Show
Easily, some of my favorite stand-up comedy is the kind that looks at the ridiculousness inherent in the English language, with the late, great George Carlin being the king of this sub-genre. Clearly illustrate why you'd rather be in the plane than on the plane, and you've made a fan out of me. Demetri Martin is just such a comedian, as his act, which consists of him making whisper-soft observations about everyday life, like the unnecessary existence of automatic paper towel dispensers, or about more surreal subject matter, like what he would do if he was a picture-frame model.

Martin's act is more-or-less stream of consciousness, as he flows from one joke to another, occasionally stringing together a few bits, but for the most part he's like a ping-pong in a washing machine. A bit about the difficulties telemarketers face when calling in sick is followed by a joke about rice milk, before a bungee jumping gag. It would be a stretch to say it's consistently funny, as there are stretches where you might get a smile here and there, but with so many jokes flying around (there are at least 90 separate bits/topics in the special's 60 minutes) you won't go without a laugh for very long, and any bad taste from a weak joke is washed away quickly. 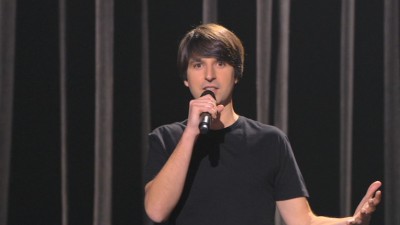 The best of his act has to be his jokes about language, which drew the biggest laughs of the entire special. When he talks about how the way you say hello in person is the complete opposite of how you say hello on the phone, I couldn't help but laugh loudly, especially when he demonstrates them with his own unique delivery. This kind of observational humor informs a great deal of Martin's material, but when he aims directly at the topic, like his explanation of silent letters or how inappropriate "Yup" is in all matters sexual, he takes it to another level of funny.

At this point in his career, Martin is somewhat haunted by his success, as he is practically required by law to include two segments in his stand-up shows, which are his drawing tablet, as he shows his simplistic drawings and charts to hilarious effect, and his music accompaniment, where he plays guitar and harmonica as he tells his jokes. While the drawings are always funny, the value of the music is questionable, but either way the gimmicks of these segments have almost turned him into a prop comic. And they aren't going anywhere, as the introduction of these bits got a better reaction than anything else he did in the show. He's even added another similar bit, showing bulletin-board signs he came up with, like the Lionel Ritchie "Hello" signs that are popular online. And once again, it's very funny, like most things Martin comes up with. 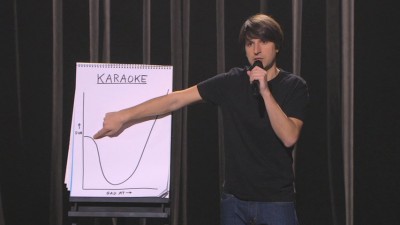 The DVD
The recent trend of clear keepcases with dual-sided covers is welcome after years of bland black cases, and this set is another example. Inside that case, you get a one-disc release, with a static menu offering options to play the special, select chapters, check out the extras and adjust the subtitles. There are no audio options, while subtitles are available in English SDH.

The Quality
The anamorphic widescreen transfer isn't the best in recent memory, as the black levels are a bit light and the level of detail is good, but not great. Overall, it's sufficiently sharp and the colors are appropriate, but there's a touch of obvious noise in spots. There's nothing too distracting, but it feels like it could have been more polished.

At this point, it's surprising and somewhat saddening to come across a stand-up DVD that's not in surround sound. But here we are. Yes, it's a stand-up show (though Martin does play music) so the audio is somewhat limited, but when you have the audience's reaction around you, it just feels more engaging. What is here in this Dolby Digital 2.0 track is fine, as Martin's voice is clear and there's good separation from his music and the crowd, but it could and should certainly be better.

The Extras
At first glance, it looks like you're getting a nice spread of extras, but don't get your expectations too high. First up is an audio commentary that runs 2:45. Essentially, Martin doesn't have much to say about the special. So then he doubles-down with an audio commentary commentary (2:49) where he explains what happened with the audio commentary, as that track plays underneath it. It's your standard Martin cleverness, but it's a disappointment anyway.

The 10:37 "Rejected Concepts from the Comedy Special" is a meatier bonus feature, as you get to hear Martin discuss ideas he supposedly pitched to Comedy Central for the show, while looking at sketches of them. These including fire and a uniquely rotating stage. His drawings tend to be quite funny and the idea of actually doing these ideas is enough to make his dry explanations rather funny.

The last three extras are clips from the show set to music to create a different atmosphere, like "A Sad Confession," "A Premise for a Crappy Animated Movie" and "A Scene from an Ominous, Grammar-Based Murder Mystery." These aren't as funny as they probably should have been, as his cadence doesn't fit with the music to create the feeling stated. 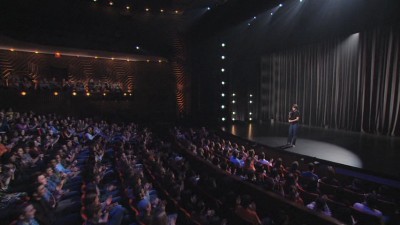 The Bottom Line
Demetri Martin is a shotgun-style comic, throwing out so much material and so many different topics that he'll likely hit the mark at some point during his special, and when he doesn't, it still has some effect. At his best, he's a master of observations on language, and that's where the biggest laughs are here, along with his old stand-bys. The DVD looks and sounds fine, but don't expect a great deal from the extras.