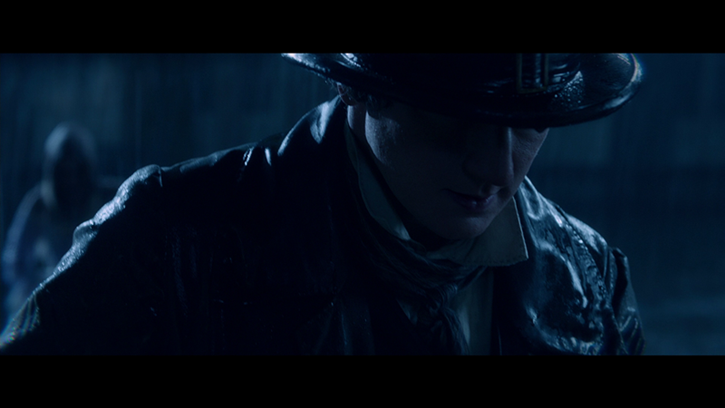 Abraham Lincoln: Vampire Hunter is a fictional (or is it?) account of the 16th President of the United States growing up as a younger man fighting vampires and learning about his path to presidency as he fights for the freedom of slaves and finds true love and true blood. Not the series, of course. That came later on, once HBO was around.  Before the advent of a HBO vampire, Abraham Lincoln (Benjamin Walker) had to learn about vampires the hard way. Nothing came easy for vampire-hunter Lincoln; he had to simultaneous kick vampire ass alongside the asses of racist slave owners. Could Lincoln bring an end to slavery (and to vampires) for good?  In this alt-universe b-movie heaven, Lincoln takes on two types of bloodsucking fiends at the same time.

Abraham Lincoln meets the young and mysterious Henry Sturges (Dominic Cooper) and he eventually finds himself convinced by Sturges of the existence of vampires and his calling towards fighting the undead. Lincoln lost his mother as a young child and remembers the horrifying incident in which he saw a man above his mother's lifeless body. Lincoln soon realizes that he had lost his mother to a vampire. With this knowledge, Lincoln sets out to destroy all vampires and to fight a good fight against the undead of the world. Eventually, Lincoln meets the young Mary Todd (Mary Elizabeth Winstead), who would become his undying love in life as his future wife. Lincoln befriends Will Johnson (Anthony Mackie). Meeting these two meaningful individuals has a huge impact on shaping Abraham Lincoln.

Who knew that Abraham Lincoln was also someone who fought the undead, bloodsucking, and obnoxious evildoers known as vampires? Seriously, who knew? It's certainly something I had never even heard of before, but I suppose one could chalk that up to it being a newly-formed myth concerning a historic figure. Maybe some would just consider it a representation of a strange new interest from the public in combining popular-culture with history. It doesn't ultimately matter though. 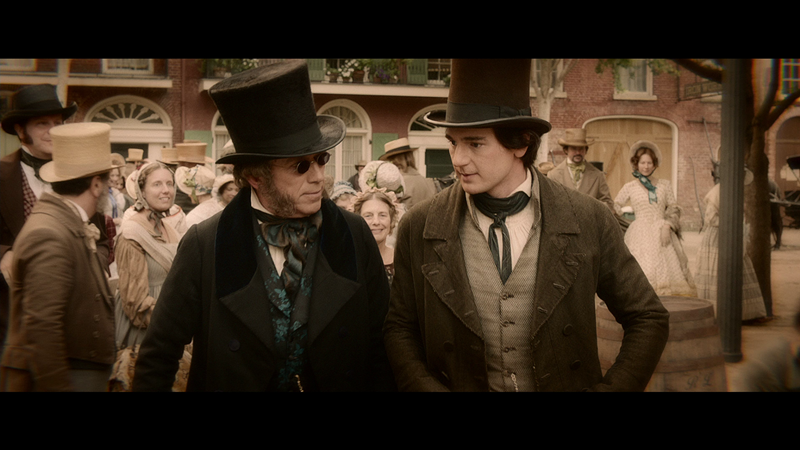 Click on image to view Blu-ray screenshot with 1080p Resolution <>

What does matter and surprises is that Abraham Lincoln: Vampire Hunter is undoubtedly one of the best b-movies in years. It's totally preposterous, of course, and it understands this inherently, and yet that is also definitely a huge part of the fun quotient on so many levels. You just find it easy to become sucked in, I guess. Vampires have a way of doing that kind of thing.

Just consider how badass a concept this is and wonder how the awesome concept could translate into a fun action-horror genre pic. Then you have some reasonable idea of what to find in this well-crafted and exciting motion-picture that keeps you constantly on the edge-of-your seat.

Abraham Lincoln: Vampire Hunter is a strange mind-trip of an experience as the film is just as silly as its title sounds but it also weaves in some serious aspects with the storyline too. At least, there are aspects to the script that are taken as seriously as  can be done in any b-movie scenario that is also intent on being focused on vampire hunting. The screenplay is based upon the novel written by Seth Grahame-Smith; Smith penned the script for the film as well. There is nothing at all amateurish about the transition to film, and the film version plays well as few high-concept or unusual cinematic experiences do when it comes down to cinematic b-movie fodder. You expect a film like this to reek of overly simplified and mundane craft. It's surprising when something as artfully done but totally absurd comes along and gets things done in the way one would want for a quality film to succeed. Abraham Lincoln: Vampire Hunter pulls it all off beautifully with solid performances, good action-packed direction from Timur Bekmambetov (who doesn't forget to slow things down for character-based dramatizations), and a screenplay from the author of the original source material. Abraham Lincoln: Vampire Hunter might not be a perfect slice of pie but it's one that certainly satisfies and it's a film that easily entertains. 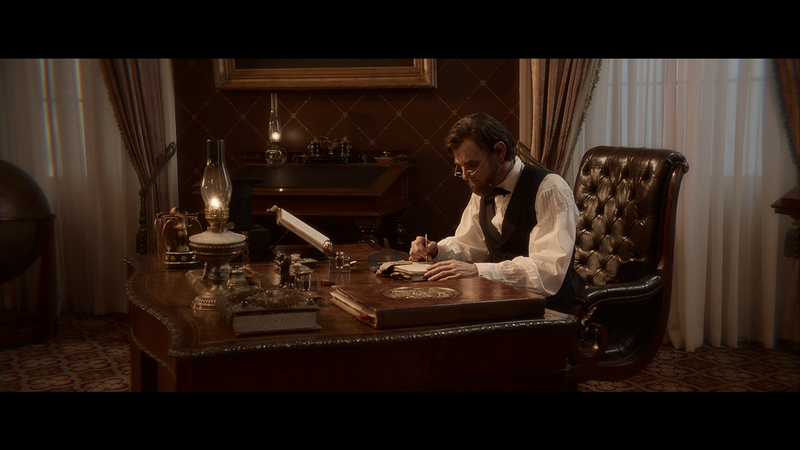 Abraham Lincoln: Vampire Hunter looks splendid on Blu-ray in 1080p High Definition. I won't argue that the film isn't as sleek looking as some modern high-budget productions, but what I'll say in exchange (and in the favor of the presentation) is that this release has a definite cinematic quality behind it with its darker cinematography, grim color palate, and often film-grain heavy look that fits the style of the film itself quite well. Shot with both digital and traditional film, I don't believe this film looks like your average production. Some scenes are as sleek as can be while others are demonstrative of traditional film looks with film grain and more old-school looks. In any case, Abraham Lincoln: Vampire Hunter looks just as impressive as it did in cinemas and it shouldn't disappoint.

The sound doesn't disappoint at all; the sound mix actually amazed me more than I expected it to. The 7.1 DTS-HD Master Audio sound mix is a visceral experience with a lot of heavy bass and surround use. It doesn't stop there. The ambiance added by exploring natural-sounding elements related to the environment of the film makes it a more complex sound mix that is impressive on virtually every level. From the swinging axe of Abraham Lincoln, to horse jumping western-tinged chase scenes, to quiet moments of character-reflections... this is definitely a presentation that manages to amaze at every moment. 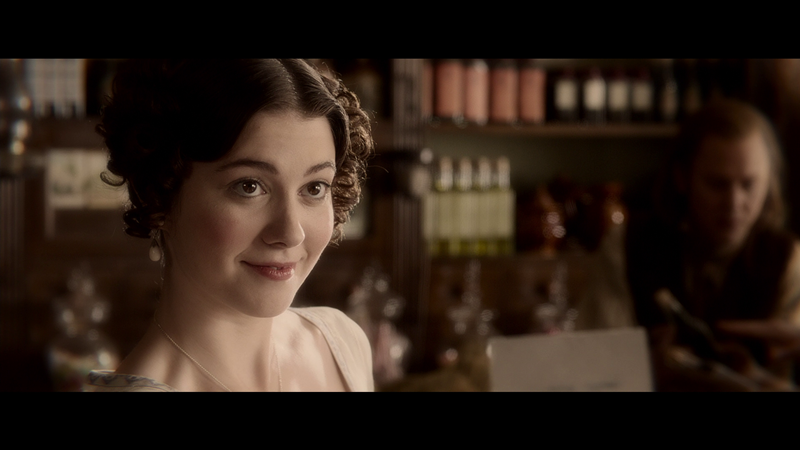 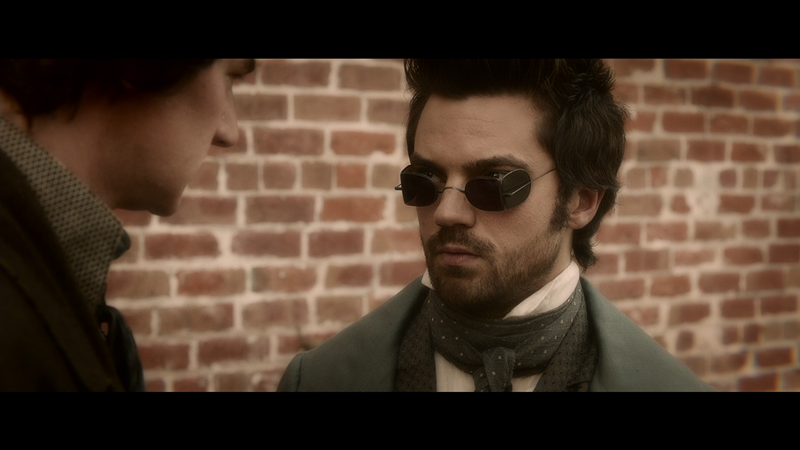 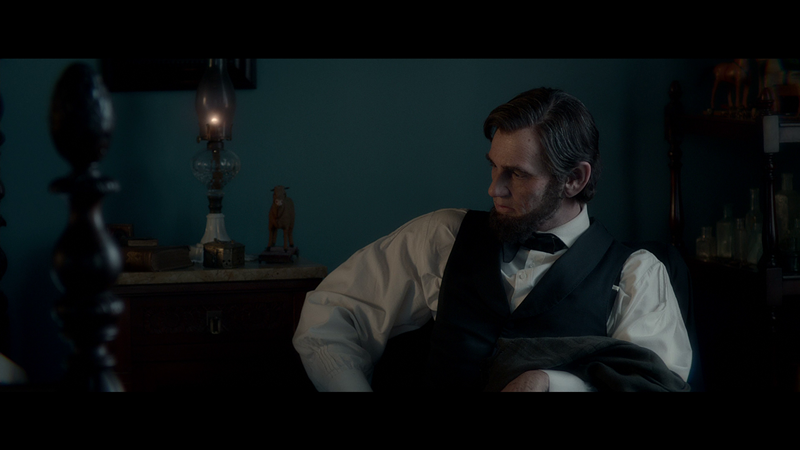 There are quite a few interesting supplements included on this Blu-ray/DVD Combo Pack release. Video supplements are presented in 1080p High Definition.

The following supplements are included:

The Making of Abraham Lincoln: Vampire Hunter is an in-depth documentary featurette exploring the making of the film. This feature contains over an hour and fifteen minutes of interviews and production footage.

The Great Calamity Graphic Novel (Exclusive to Blu-ray: This is an animated short film.) 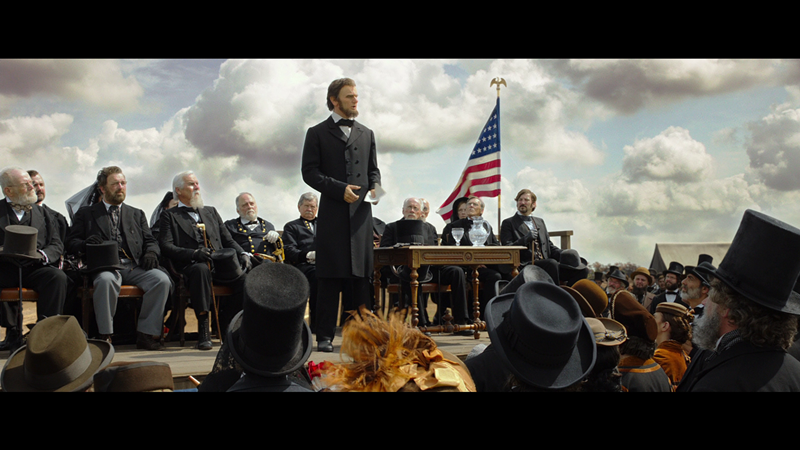 Abraham Lincoln: Vampire Hunter turned out to be a much better movie than I expected it to be going in for my first viewing of the effort. I enjoyed the move immensely on the big-screen and enjoyed it just as much on Blu-ray. The film is an offbeat combination of the ultra-surreal myth formed within the story and the actual history of Lincoln. This is far from being a perfect film, but considering the fact that it's just a ludicrous movie aiming to entertain with sleek B-movie storytelling and A-class Hollywood production elements... well, it's hard to deny how great Abraham Lincoln: Vampire Hunter is for sheer entertainment value. This is a fun flick with tremendous action-sequences and solid performances throughout.