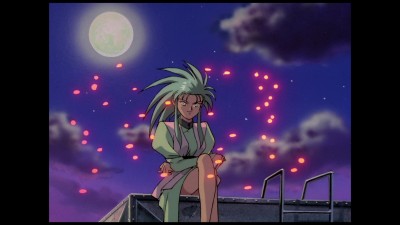 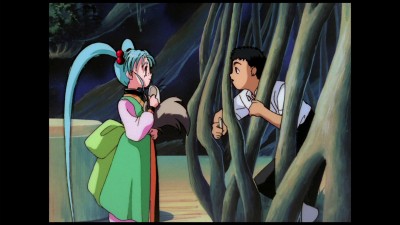 A friend from my freshman year of high school was something of a Japanese entertainment fanatic. I don't mean just anime, but he had an extensive collection of manga, music, and went as far as to study Japanese so he could eventually understand imported books and video. None of it was really my bag at the time, and hell, much of it stillisn't, as I've never been able to share his love for the music from that culture. After 6 months of hearing him go on about anime specifically though, I asked him to loan me VHS tapes of some of his favorite series, because I had to find out what all the fuss was about. He was kind enough to oblige, partly because he was thrilled at the prospect of 'converting' me, and Tenchi Muyo was the first anime I had the pleasure of seeing. This was an important turning point in my life, because this anime is directly responsible for whetting my appetite and inspiring me to get some other series under my belt. Without these thirteen OVA's, I may never have come to enjoy Hellsing, Dragon Ball Z, Trigun, Cowboy Bebop, Mobile Suit Gundam Wing, or any of the more obscure series out there. When I heard that the Tenchi Muyo!: OVA Series was being treated to a Blu-ray release, it was hard not to practically jump for joy. However, that excitement quickly turned into skepticism - The 90's was a long time ago for me, and being that my taste for anime has changed considerably since, I wasn't sure if my memory of Tenchi would hold up through a nostalgic screening in 2012.

For those unfamiliar with the original OVA's, the story itself isn't exactly groundbreaking, especially compared to today's standards, but the setup is intriguing enough - Tenchi Masaki is spending his summer vacation training with his grandfather in the Okayama mountains, home to his family's shrine. One day, the mischievous boy manages to wrangle the keys to a secret cave from his grandfather, and runs off to see the secret his family has been hiding (well, protecting) for quite some time. The legend says that there's a demon locked inside with the very sword that once defeated it, but Tenchi apparently wrote it off as mere fable. Of course, most legends are based on an ounce or two of truth, and Tenchi's ignorance is responsible for releasing the demon, which (of course) happens to be a stunning beauty that calls herself Ryoko. After a bit of a 'misunderstanding' (in the form of an all out assault), Tenchi is able to befriend the demon, as she requires his assistance to, ironically, save the world from a larger threat. From here, Tenchi finds himself surrounded by a host of magical and beautiful women, and he doesn't quite know what to do with himself. When an even larger threat reveals itself however, Tenchi must learn to set his boyish foolishness aside and become a man with honor and dignity. 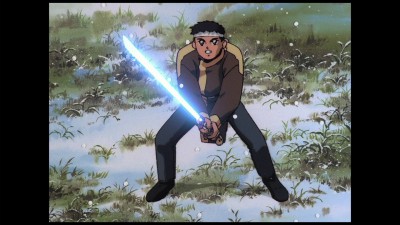 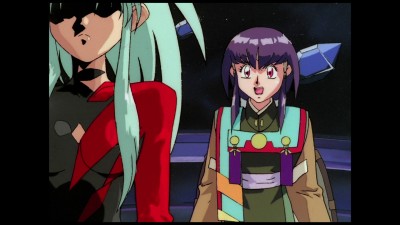 So, how does it all fare today? Well, I once considered Tenchi Muyo to be meticulously crafted, but now, it's more of a mixed bag when it comes to the quality most of us expect from the anime of today. Let's be honest - Most of us are sick of watching a boy bumbling around a bunch of beautiful women. It's an understatement to say that it's a tired idea at this point, probably even more so than the coming of age tale that tends to coincide with it. So, Tenchi Muyo is no longer quite as appealing on a conceptual level. It even seems like a lackluster experience on a structural level, thanks to some dialogue that isn't particularly clever, and the bits of fan service that are heavily, yet innocently interwoven throughout.

But despite these seemingly negative aspects, this is actually where Tenchi Muyo gets most of its charm. Yes, there's goofy situations and dialogue and harem-based fan service works to tease the audience plenty, but these ideas are presented as playful and humorous as opposed to nasty and gratuitous, which is something of a lost art in the genre nowadays. Tenchi Muyo never takes itself too seriously, so these seemingly negative aspects actually work together to provide an atmosphere of undeniable fun. As a result, everything magically comes together in a way that's been tough to replicate ever since. 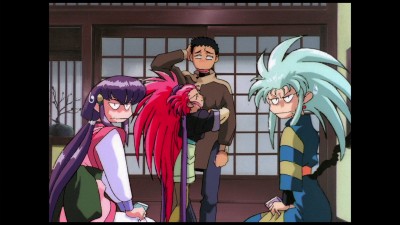 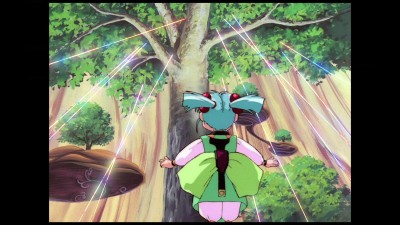 First and foremost, the character interaction is, hands down, the most entertaining aspect of Tenchi Muyo. Their dialogue isn't 'smart' exactly, but they all play off each other flawlessly. Then of course there's Tenchi himself - Although he's the typical bumbling fool we're all accustomed to, he's extremely likeable and his unlikely successes makes you want to root for him. Another thing that enhances the show, are the plot points which require huge leaps of faith on a regular basis - Tenchi ganking the key from his masterfully disciplined grandfather, Ryoko turning into a spaceship (yes, you read that right), and other absurd situations are all in tune with the show's semi-serious but mostly playful attitude.

I wasn't sure if my first love in anime would be as enjoyable as when I first saw it some years ago, but I legitimately believe that there's still a place for Tenchi Muyo in today's market. Not just for old fans, but for new ones as well. I can tell you from personal experience that this is a terrific gateway into the world of anime, but even looking at it from the perspective of a well seasoned anime fan, there's little to dislike about the OVA's that spawned a slew of other series and even a successful film franchise. Yes, it's goofy and cheesy, but the characters are unforgettable and the format is fun. Newcomer, old fan or skeptical anime vet? It matters not. Tenchi Muyo is going to win you over... just don't go into it expecting something heavy or complex, and it's likely to find a special place in your heart, just as it did with me. 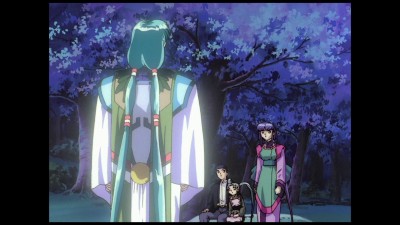 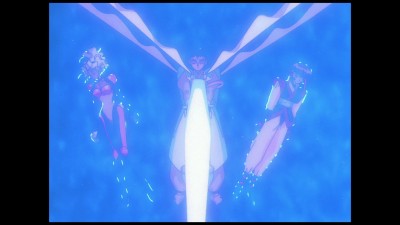 The Tenchi Muyo!: OVA Series has been brought to Blu-ray with a 1080p, AVC encoded transfer (1.38:1), and I have to be honest - I'm quite surprised at how good it looks. The source seems to have some inherent softness to it at times, but solid lines are sharp more often than not. There's also a great deal of integrity that's been maintained as far as grain structure, black levels and contrast, but it's the color saturation that impresses the most. Also, edge enhancement doesn't really seem to be an issue, nor does blatant banding. The original film elements still look a tad on the dirty side, but there's no mistaking that this is the best that Tenchi Muyo has ever looked. I'm very skeptical when it comes to any FUNi release, since they have a reputation of upconverting many of their respected properties, but I'd say without doing a complete and expensive restoration on these OVA's, this is the best it will ever look. If you've been on the fence, wondering if this release would be worthy of replacing your old DVD's, the answer is most definitely 'yes'.

I'm unfamiliar with the OVA's original sound design, but what we've been presented with seems a little backward - The Japanese track has been treated to 5.1 Dolby TrueHD, while the English dub is 2.0 Dolby TrueHD. Even if the original Japanese mix wasn't repurposed (which I believe it most likely was), it seems kind of odd that the English dub wasn't given the same treatment. Still, both tracks sound similar enough to make the difference not worth complaining about - The 5.1 track is front heavy in almost every respect, although there is the added presence of environmental ambience and the score sounds a bit fuller. Dialogue is crisp and clean on both encoded tracks, and the sound effects up front are flawlessly preserved.

Unfortunately, FUNimation didn't really do anything for this deserving series in the way of supplements. After a look at Omake: Here Comes Jurai Part 2 and US Trailer, these discs are bare.

The packaging is rather nice, though. The box is sturdy and houses two plastic keepcases inside - One for the Blu-ray collection, and one for the DVD collection. In between is a nice booklet that contains a lot of tasty promo art, which of course features lots of tantalizing shots of the harems. 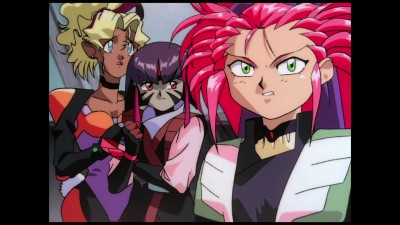 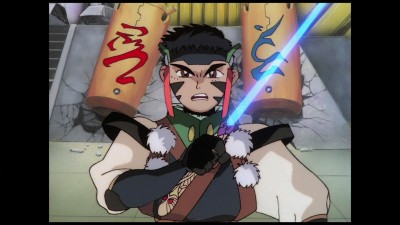 Tenchi Muyo became a personal favorite in my high school days, and remains so despite the fact it isn't complex or even all that clever. The characters are extremely likeable and their interactions with one another are priceless additions to anime as a whole. The tonal shift ranges from goofy to a serious battle between good and evil, so there's something for everyone to enjoy. The best compliment that can paid to these OVA's though, is the fact that it's fun enough to act as a gateway to anime. This usually means 'good for starters but won't withstand the test of time', but the original 13 OVA's in this collection stand up to repeat viewings very well. There's no supplements worth discussing, which is a true shame, but the video and audio are more than adequate and blow away the old DVD set. Highly Recommended.