Steel Magnolias is a heartfelt story about the complex lives of several women who live inside the small Louisiana town of Chinquapin. This is a story about these characters uniquely important relationships and all about the connection between the characters as they develop as people. The story around the film is almost a side-product of the development of the characters as we get to better understand an incredible group of women with different personalities, life goals, aspirations, and directions in life as they unite around several important events, including the wedding of Shelby Eatenton (Julia Roberts).

Steel Magnolias was released in theaters 23 years ago. This detail seems difficult to comprehend.  What makes this hard to understand is the fact that few melodramatic films have been in the same league of quality filmmaking in over two decades.  There has been a lack of any reasonable competition. Steel Magnolias remains one of the best.

I consider Steel Magnolias to ultimately be a film about love and the spirit of human connections. It's a movie that makes viewers reflect on characters who feel real and who you can connect to.  The best in cinema emphasizes this element above all else. As we get to become familiar with the characters the story focuses in on we can see reflections in the flowing stream of our own life direction, connection, and intermingled unity with others. Steel Magnolias provides a sense of compelling character study a modern melodramatic film would struggle to convey adequately.

The film manages to remain a modern classic with appropriate direction by Herbert Ross, a intelligent script written by Robert Harling (the author of the original play the film is based upon), and a massive number of superb performances by the cast of actresses including Sally Field, Daryl Hannah, Olympia Dukakis,  Dolly Parton, Julia Roberts, and Shirley MacLaine. These elements were necessary aspects which contributed to the long-term love Steel Magnolias has maintained.

The characters are entirely fascinating. You have a mother character who at first glance seems cold but who is actually someone who just wants to look out for her own diabetic daughter (who is planning on going ahead with a pregnancy despite receiving advice to not attempt such a thing).  There's a shy and Christian-belief led girl who wants to extend her religion to those around her: not because she thinks it makes her a better person (or even that everyone needs to follow her beliefs) but because her belief is something that helped her during difficult times. There's even a cranky lady who goes around wearing a negative emotion on her shoulders at almost every turn - except when we see that she is really just the sweetest lady there is (if you can look past her cold states and occasionally bizarre quips).  And then we have characters like Truvy Jones (Dolly Parton), who is as sweet as a warm blanket to everyone else that is around her and exuding joy and kindness.

The best thing about this film is the acting and characterizations. You might feel hard-pressed to find another film with as many talented actresses working together in perfect unison; none outshine the other actresses, and all contribute to the overall impact felt by the film. It makes Steel Magnoliasirresistible.  It's easy to love the characters and the actresses who successfully helped make them convincing.

It's no wonder Steel Magnolias has a loyal following: it's a worthwhile movie in every filmmaking aspect and few Hollywood productions have a female cast that parallels the fine work from the actresses who spotlighted Steel Magnolias, who brought these characters to life, who made them believable, and all incredibly relatable to audiences. If you haven't seen Steel Magnolias before, you're missing out on a significant film and a gem of the late eighties. Make no mistake about it: this film is one of the best in melodramatic storytelling. 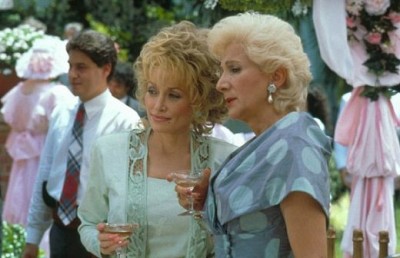 Steel Magnolias has received a great presentation from Twilight Time. The company has done a solid job of presenting the film in a way that seems to be unfiltered and without annoying side-effects like DNR (Digital Noise Reduction) or unnatural boosted colors. The film has a fine layer of film grain I thought was unobtrusive: mostly, the film looks clean, clear, and beautiful without having the waxy look that could have spelled disaster for the transfer. The color palette is appropriate and true to the film and isn't muted.

I just appreciate it when studios release films on Blu-ray with such high quality that it feels as though you are probably seeing the film in the best quality since the opening weekend of theatrical release. Some occasional moments of film print specks (minor debris) are noticeable if you are nitpicky about this release, but most viewers won't even notice these moments -- minor imperfections in what is an almost entirely flawless presentation. This is a top-notch MPEG-4 AVC encoded 1080p presentation.

The 5.1 DTS-HD Master Audio is much better than I anticipated. Granted, the film basically sticks to its stereo roots and it doesn't sound engaging in terms of directionality of the rear speakers but the real strength can be found in the way the bass surrounds the beautiful score by Georges Delerue (one of cinema's finest composers), the clarity of the dialogue, and the sharpness of the front speakers. The audio presentation is more than adequate. Steel Magnolias sounds lovely and shows advantages the film hadn't presented before with the earlier compressed audio incarnations.

Subtitles are provided in English SDH (for the deaf and hard of hearing).

Sparse extras seem to be the course for most of these Twilight Time releases. However, a small handful of nice audio-only supplemental inclusions make nice additions to the release. Viewers can choose to listen to Steel Magnolias with Director's Commentary (presented in DTS 2.0) or with an isolated score track that preserves the score with 2.0 DTS-HD Master Audio.

Twilight Time has also included the original theatrical trailer and a printed booklet with an essay about the film. 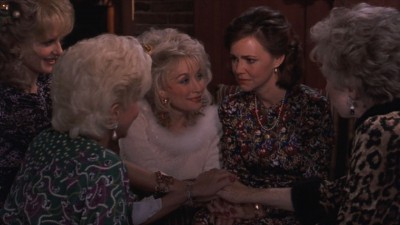 Steel Magnolias holds up even better than the latest collector's steelbook available on the market. Pun intended. By the way, no, this doesn't come packaged in a steelbook. Though it would have been quite cool if it had! (Are you listening, Twilight Time? Steelbook Steel Magnolias!) Twilight Time's given the film weak cover art, great PQ/AQ, and a small selection of audio-only extras.

The release is certainly worth purchasing for those who love the film already, even despite an annoying, bland, and badly done cover art. Steel Magnoliasis a classically delicious slice of American cinematic pie and with notable reason: It's a heartfelt story that is all about humanity and our human connections.