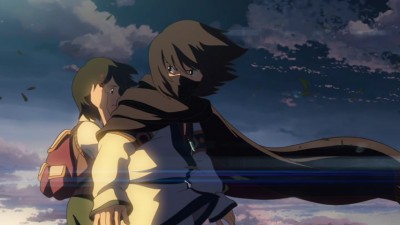 Children Who Chase Lost Voices is the latest film from acclaimed filmmaker Makoto Shinkai (5 Centimeters Per Second, The Place Promised in Our Early Days). Shinkai is one more of the most highly regarded filmmakers working within the anime film industry today. Drawing on comparisons to Hayao Miyazaki and to Studio Ghibli, writer/director Shinkai delivers films many anime fans have said herald him as a second-coming of Ghibli. Can that possibly be accurate? I will raise that as a question of the moment.

Children Who Chase Lost Voices begins with a girl named Asuna, who we learn had lost her father and is being raised by her mother, who must work long shifts at a hospital. Asuna can actually hear strange musical tunes being broadcast through a special crystal radio. The radio was an important gift from her father. Asuna's only close friend appears to be a cat that looks like a mix between the design of the cat Jiji from Kiki's Delivery Service and fox-squirrel Teto of Nausicaa of the Valley of the Wind.

As the storyline progresses, we witness a giant monster attempting to kill Asuna. Then this young and mysterious boy swoops in to save here. Then he appears to die. Then Asuna is wondering what could have happened. She goes to school and she learns about the place "Agartha", which is supposed to be a place of the dead.

The next day Asuna finds herself meeting another young boy who bears a strikingly close resemblance to the first boy. It turns out that it is his younger brother. Before long, she is dramatically thrown into a story where she enters a magical gateway, faces down scarier, frightful enemies. 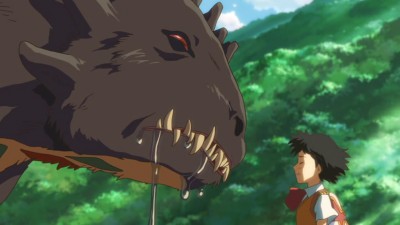 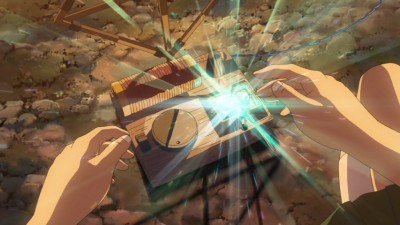 It probably doesn't sound horrible based on that description. It is oh so horrible, though. Everything about this film was convoluted and messy. The characters are not developed characters and are instead mere caricatures carrying out the plot in a way that feels false. Storytelling-wise, I can't even begin to try and explain to readers why anything that was happening in this film was truly significant. This film felt like a giant missed opportunity.

The plot and the storytelling within Children Who Chase Lost Voices is unbelievably bad on essentially every level of filmmaking one can consider. At every turn, Shinkai seems like an amateur filmmaker who is an unfocused and unsure artist who has been inspired by the great anime filmmakers without proving himself capable as a competent filmmaker. Shinkai is not capable of telling a well-crafted and emotionally-resonant story.

The animation isn't all it's cracked up to be either. Frankly, I don't understand the appeal of an artistry that feels forged. Everything from the character designs to the backgrounds seems like something that is attempting to emulate the Ghibli method. Unfortunately, as pretty as the art actually is it's not the most memorable artwork and it can actually feel a bit bland at times. I don't understand the immense acclaim. It's not that it's a badly animated film; it's just that I have seen much better artwork and done in a much more original way.

I have to disagree with the generous praise thrown to Shinkai as a filmmaker. So far, I have seen two of his feature films (The Place Promised in Our Early Days and Children Who Chase Lost Voices) and I have been largely unimpressed by both of these efforts. I cannot understand how this filmmaker has garnered so much acclaim and attention from both anime fans and by press. Nothing about his style feels genuine to me and all I could think about after finishing viewing this film was what a poor job I thought Shinkai did attempting to model what a film made by Miyazaki means from either a storytelling or artistry perspective. Children Who Chase Lost Voices lacks a distinct voice and is a forgettable effort that feels largely unnecessary. 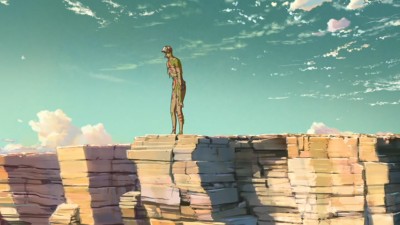 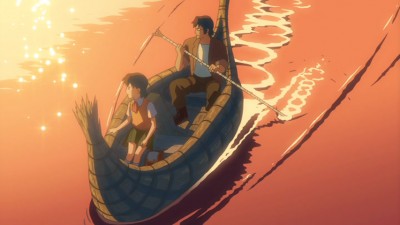 This release contains a first-rate transfer of Children Who Chase Lost Voices. This is as stunning a DVD presentation as one could possibly hope for. The transfer does a good job of representing the animation quality and presents the film in top-notch quality. The transfer has minor issues in nighttime scenes and had minor digital noise in a few of these moments, but this transfer comes close to being a perfect representation of the film on the DVD format.

The audio quality is also impressive to behold. The release contains two options: English 5.1 and Japanese 5.1 surround sound. Either option does a solid job creating an immersive and exciting experience. There are many moments throughout the film in which the surrounds were well utilized and it adds to the enveloping nature of the film. The music by Tenmon also gets a reasonable chance to shine and blends in well with sound effects in the film.

Children Who Chase Lost Voices arrives on DVD in a two-disc release containing a plethora of extras that will satisfy fans. The first main supplement is a full length audio commentary with director Makoto Shinkao, the production staff, and VA.

The following video supplements are included on this release:

The Making of Children Who Chase Lost Voices (45 min.) is an extensive behind-the-scenes look at the film's creation and production.

The Works of Makoto Shinkai (7 min.) is a promotional piece about the films and work of the filmmaker who made Children Who Chase Lost Voices. 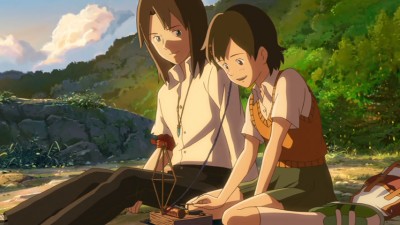 Children Who Chase Lost Voices wasn't my cup of tea. I didn't enjoy it and I don't understand why the film has appealed to fans of Studio Ghibli. It lacks a strong narrative and characters to connect to on any notable level. It's a visual feast but also one that feels like imitation Ghibli rather than something that is authentic in its own realm of imagination. It just doesn't feel unique enough to be successful in its own right. Children Who Chase Lost Voices disappoints, underwhelms, and feels like a poor knockoff of a Ghibli effort more than anything else. This is not a film I would recommend to any anime fan looking for something more than mere imitation of what is truly great in anime filmmaking.