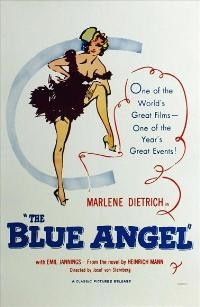 The idea of l'amour fou -- the overtaking of the humdrum and the mundane by pure, passionate devotion to a soul mate/lover -- carries with it the romantic promise of liberation. But, as a great many novels, plays, poems, and records (from Romeo and Juliet to An American Tragedy to PJ Harvey's Rid of Me) have trenchantly reminded us, there's always an element of self-immolation, masochism, and suicidality to mad love -- a dark side that's no less alluring, if much more disturbing. That Josef von Sternberg, the great director of such silent classics as The Docks of New York and Underworld, and his accomplice in art and love, Marlene Dietrich, were, respectively, a creative mind and a big-screen persona uniquely well-equipped to cinematically explore l'amour fou's fearsome elation and despair, is attested to by their first collaboration, 1930's The Blue Angel (which Sternberg made in Germany, where he discovered Dietrich, on the prestigious invitation of that country's biggest studio, who wanted to claim some of the Austrian-American Sternberg's movie magic for themselves). Dietrich was, of course, a revelation, and the way the film uses her (or was it she using the film?) is ingenious: Few movies bend the cinematic medium toward iconography like Sternberg's, and here, he's found and proudly displayed a goddess who, in perfect keeping with the story's mad-love tone of self-effacing worshipfulness, plays only by the rules of the firmaments, nonchalantly inspiring the greatest devotion in (and posing the most dangerous threat to) mere mortals. 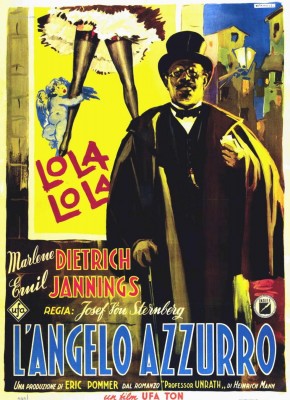 And mortals don't come much more mere than the fusty, pedantic Professor Immanuel Rath (German star Emil Jannings, featured in Murnau's Faust and Sternberg's own superb American film, The Last Command), whose class of high-school-aged boys mocks him ruthlessly in retaliation for his constant, prudish subversion of their enjoyment, which consists primarily of disruptively passing novelty cards featuring suggestive images of the singer/dancer/sex object Lola Lola (Dietrich), whose residence at the local nightclub, The Blue Angel, is making their studies and Professor Rath's classroom seem more lackluster and pointless than ever. The professor, fed up with this disreputable, sexy woman's negative influence on his unruly pupils, decides to make an unexpected appearance at the venue and shame his boys back into asexual respectability. But his clockwork orderliness (nicely suggested by Sternberg with repeated close-ups of an elaborate mechanical clock that keeps time with miniature human figures that pass dutifully to the rhythm of its ticking) has left him much more defenseless than his less-intellectual but more worldly students; Rath's fixation on Lola, hard as he tries to resist it and deny it to himself and others, begins the second he lays eyes on her as she talk-sings and flirts in her absurdly sexualizing costumes, generally commanding The Blue Angel's stage with her exposed-flesh and statuesque presence.

The exponentially increasing power of Rath's Lola fixation is the film's basic arc, which traces the professor's inevitable, lusted-after descent (for who can resist this carefree, actually rather guileless but unstoppably attractive seductress?) from complete bourgeois fastidiousness to reckless visits to Lola (ostensibly to keep hunting down his wayward students) to spontaneous, violent gallantry on her behalf, which surprises and touches the singer, to...a total enslavement brought on by a marriage proposal to Lola that costs him his teaching position and leaves him with nothing to do but become a lackey for the musicians, singer-dancers, and magicians in Lola's touring troupe. Even there, his position is degraded to that of actual clown, the butt of demeaning jokes both on and off stage; he's thrown everything away to be with the increasingly indifferent Lola, his consuming passion, but he's far from her only admirer and, having consigned himself to an underling position, he can only watch in impotent rage as men who still have a self left to sacrifice to Lola stumble eagerly toward the prize he wrongly believed he'd won. 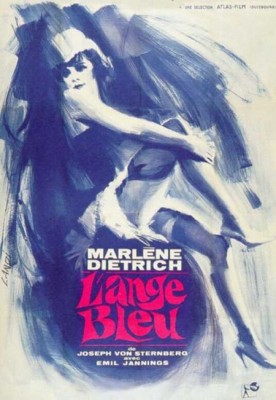 It would be a mistake to characterize Sternberg's film as a morality tale just because, in the end, Professor Rath, having lost Lola and everything else, weakly crawls back to his former school to expire in peace in a darkened classroom, a night watchman's flashlight illuminating his lifeless face in a cruel parody of the spotlight Lola had had thrown on him when he first appeared in her sights during that fatal initial visit to The Blue Angel. The Blue Angel is something more akin to cinematic S&M, a quasi-ritualistic depiction of the suffering endemic to the fixed hierarchy of beauty and sexual desirability that fates Lola to be the master of the Professor Raths of the world, whose mounting pleasure in their devotion and submission to their aloof object of desire would naturally climax in a "little death," so to speak, after they've served their purpose and fulfilled their instinctively sought-after role. It's not that we're happy to see Professor Rath dead, or that it's a "happy ending" (at least not in the literal sense), but it is an unsettlingly satisfying conclusion to the film, a post-orgasmic collapse, one that neither resolves nor judges but simply lays bare the eternally troublesome incompatibility of emotional health and balance with the thrillingly complete, fatal succumbing to romantic/erotic obsession. (The only other milieu to which Sternberg gives any attention, that of the late-teen schoolboys, is similarly marked with a hierarchical cruelty which, if I'm not mistaken, manifests as a homosocial/erotic, Billy Budd-like persecution of a too-angelic/pretty young man by his classmates and the professor himself.)

It's a plot whose rational or psychological motivations Sternberg doesn't bother to go into; his conviction that Professor Rath is destined to sacrifice himself on Lola's altar permeates the film, which has a fixated, obsessive aura that matches Professor Rath's state of mind and seems to organically close off all other possibilities. Sternberg's often sublime structural and stylistic maneuverings (aided by framings and compositions formed in collaboration with Fritz Lang's Die Nibelungen and Metropolis cinematographer Günther Rittau, and hampered only by the clunkiness of early sound necessitating less camera movement and an occasionally distracting number of microphone-concealing fixtures jutting into the frame, usually from overhead) make the professor's world a vacuum from the start and proceed from there to further narrow it down and confine the lovesick protagonist in his erotic fever-dream/nightmare. All that exists in the film's opening sequences are the bare classroom, the professor's tidy, book-lined studio flat, and the little cobbled street (a patently artificial, expressionistic set) he navigates between them; later, the only possible world is that of The Blue Angel, the audiences and troupe of performers that all orbit around Lola. The singer's most memorable tune, Friedrich Hollaender and Robert Liebmann's "Falling in Love Again (Can't Help It)" (you'll undoubtedly recognize the melody) has her characterizing herself as an impassive, naturally blazing flame into which moths like the professor just as naturally flutter and, achieving their forbidden desire, burn up; the film itself is similarly mothlike, gravitating toward Lola's luminescence, with the professor's surroundings, almost exaggeratedly unadorned and bourgeois-bureaucratic, only giving way to Sternberg's famous, delirious mise-en-scène -- rich interplays between lustrous light and ominous shadow, mirrors refracting characters' faces, and way too much sumptuous stuff (showbiz paraphernalia, garments, cigarettes, bric-a-brac, makeup, even Dietrich's shapely legs) crowding the frame -- when Lola's presence transforms them.

As typical for Sternberg, it's in these idiosyncratic emphases that his cinema reveals its real ambitions and aims, its entirely sensuous and not at all cautionary essence. In a sense, The Blue Angel is as dangerous as Dietrich's Lola: It's a genuflection to the self-destructive abandon brought on by the cult of beauty, and all about that moment of incomparable ecstasy that comes in the split-second between the flame-drawn moth hitting the light and its fiery death, between our visual immersion in the director's enticing, overwhelming, hyper-florid compositions and our woozy feeling of impending, welcome suffocation. Sternberg has the artistic wherewithal to convince us not only that such ecstasy is worth its excessively steep price of tragic humiliation and destruction, but that such disproportionate, irrational, wasteful tragedy is inseparable from, and indeed a primary source of, the toxic, irresistible pleasure that lures and ensnares Professor Rath, and that Sternberg lets us experience through his film at an only somewhat safer distance. 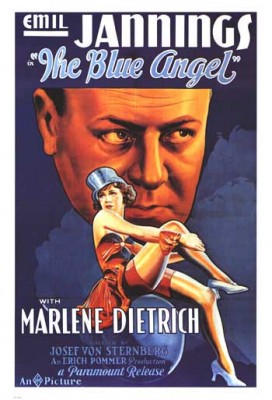 
Kino's remastered transfer of The Blue Angel (AVC/MPEG-4, 1080p, at the original aspect ratio of 1.19:1) is a very fine job. There's only the expected amount of print-wear markings (some lines/scratches here and there, a certain flicker to some scenes) for a film of this age and vintage. The plays of light and the contrasts in the black-and-white cinematography come through very much intact, and there isn't a trace of compression artifacting (aliasing, edge enhancement) or over-flatness from digital clean-up; the natural grain of the film is nicely preserved.


The film's original mono is presented here as an uncompressed PCM 2.0 soundtrack, and, though the limitations of very early sound (a thinness, tinniness, and/or distortion to some of the music and dialogue) endemic to a 1930 film are inescapable, the presentation itself is as good -- clear, sharp, balanced, and undistorted -- as it could be. 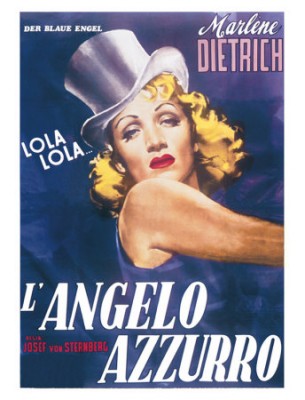 
Only the second sound film by the great silent filmmaker Josef von Sternberg, The Blue Angel is more tied down visually than his earlier, silent masterworks. Still, it bears the same unmistakable, intoxicating Sternberg stamp as his greatest pictures, proffering a generous dose of the director's trademark atmosphere -- obsessive, overstuffed claustrophobia -- as it spins this at first sordid/arousing, then despondent tale of a stuffy professor's (Emil Jannings) downfall at the hands of an erotically imperious, emotionally impervious nightclub singer (Marlene Dietrich). The film is neither Sternberg's best, nor is it the height of his running collaboration with his muse/lover Dietrich (a more likely candidate for that honor would be The Scarlet Empress), but that doesn't mean it doesn't need to be seen tout de suite if you haven't already (or, if you have, revisited in its new, conscientiously swell-looking Blu-ray incarnation): It's the film that made Dietrich a star, one of the very first European talkies, and the major conduit of von Sternberg's singular talent from the silents into the sound era. Quite apart from all that film-historical context, the film stands on its own merits as a perversely touching spectacle, striking at the eternally sensitive nerve of dreamed-up, elusive and illusionary, unattainable beauty and perfection. Dietrich's repeated incantation of her singer's insidiously spellbinding little ditty, "Falling in Love Again (Can't Help It)," takes on an uncanny power over the course of the film as she precariously dangles Jannings's professor from her little finger (she can't help it, and neither can he), but the song's only the beginning: The film as a whole sustains that sense of luscious, irresistibly attractive poison. The Blue Angel is a dirge-like hymn for one man's enslavement to the sadistic, rapturous, ultimately deadly cult of beauty, and its ominous strains are as haunting and unforgettable in the end as they are alluring at the beginning. Highly Recommended.