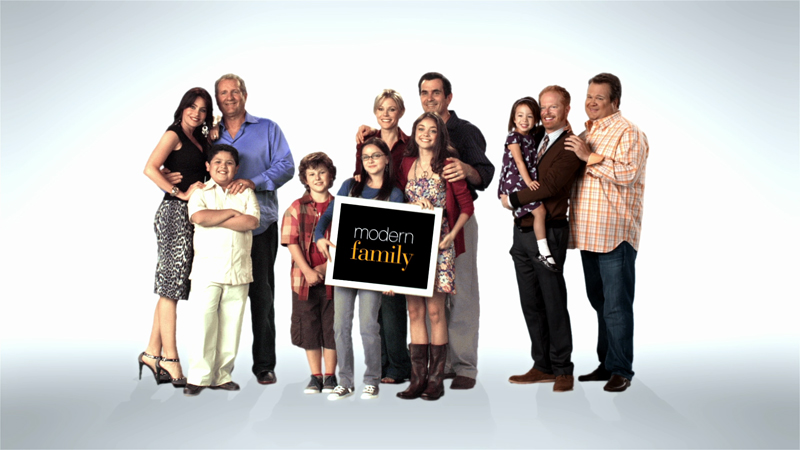 Reviewer's Bias*
Loves: Modern Family, good sitcoms
Likes: The vast majority of the cast
Dislikes: not getting commentaries
Hates: That Community doesn't get the same respect


The Story So Far...
Telling the story of three generations of the Pritchett clan, centered around Jay (Ed O'Neill) and his kids Claire (Julie Bowen) and Mitchell (Jesse Tyler Ferguson), and their respective families, Modern Family was, for all intents and purposes, an instant hit with critics and viewers. A single-camera sitcom without a laugh track, this mockumentary series (complete with talking head interviews with the family) blends together three types of relationships and the laughs and struggles that come with them, with a heaping helping of heart, to create a genuine feel-good show with a massive amount of laughs. The first two seasons have been released on DVD and Blu-Ray, and DVDTalk has reviews of both releases.

The Show
Thanks to several conspiring forces beyond my control, I sit down to write this review well after the set arrived in stores, a situation I am quite unhappy to find myself in. However, this unfortunate timing means I'm writing this review after the Emmys ceremony, where these episodes were honored with four of those golden trophies, including the show's third-straight title for Outstanding Comedy Series. If it wasn't clear before, it's pretty much established fact now: Modern Family is the most acclaimed and beloved comedy series of the modern TV era.

The third season of the show would see the series maintain the same sense of consistency seen in the second year, as not a lot changes in the world of the Pritchetts, maintaining the dynamic of a family that fights frequently, yet loves each other just as much. While the kids age and there are some modifications to the family's daily lives, in the end, they'll still be doing the coach interviews, still getting caught up in wacky misunderstandings and still celebrating big family vacations and holidays giving them opportunities for new adventures. This season, they traveled to Wyoming and Disneyland, Claire tried her hand at local politics and Cam and Mitchell explored expanding their non-traditional family, and along the way, many laughs were earned.

While the relationship between Jay and his fiery Colombian wife Gloria (Sofia Vergara) provide some of the most consistently hilarious moments, the core of the show is Claire and Phil (Ty Burrell) and their three kids, Haley (the oldest and dimmest), Alex (the smart middle-child) and Luke (the youngest and oddest.) They come off as one of the most realistic families on TV, through their bickering and more loving interactions. In this set, in addition to trying to help Claire get elected to the city council, they have to deal with Haley's future, as she starts thinking about college, and it comes with plenty of headaches, including Phil and Claire's begrudging acceptance of her growing up and fear of her ignorance. "Virgin Territory" may be the high point of the storyline, as Phil confronts Haley's adulthood, in one of the best handled examples of a teen sexuality storyline in TV history, and a perfect illustration of how this show gets the most out of depicting how families work. 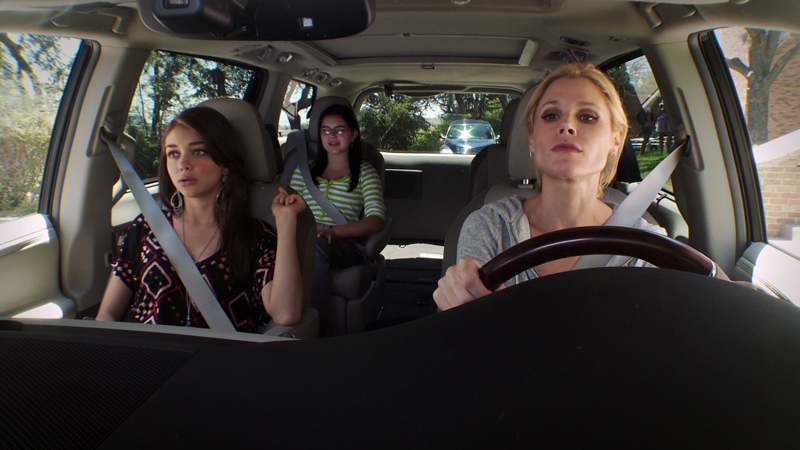 The other big storyline this year is Cam (Eric Stonestreet) and Mitchell's attempts to add a boy to their family. Together, they are great, and as their adopted daughter Lily gets older, she gets the chance to steal more and more scenes (one moment with the three of them and a laptop is as funny as anything in the entire season.) From their attempts to adopt, to their flirtation with surrogates (which involves Claire in another great bit of family strife) to the season's emotional finale, their tale really became the core of the show. Even when they weren't focusing on a sibling for Lily, they were center stage, like when Cam's old clown partner Lewis (Bobby Cannavale) returns, much to Mitch's chagrin, or when Lily starts cursing and Cam can't help but giggle manically.

Admittedly, some of the laughs they get are of the easy variety, thanks to playing to some gay stereotypes, but more often than not they are earned via old-school comedy skill, with plenty of clever wordplay, impressive slapstick and brilliantly structured writing. You don't see this kind of classic sitcom comedy too frequently on TV, and when you do get it, it's not so smoothly paired with pathos. You'll probably never see a "very special episode" of Modern Family, but that doesn't stop them from killing off a character to explore how people deal with death or put their stars through the ringer to capture some genuine emotion. It may seem a bit formulaic and certainly a bit too clean the way the episodes resolve during the late-game voice-over that wraps each episode, but they're always true to the show's tone and damn if they aren't always touching. 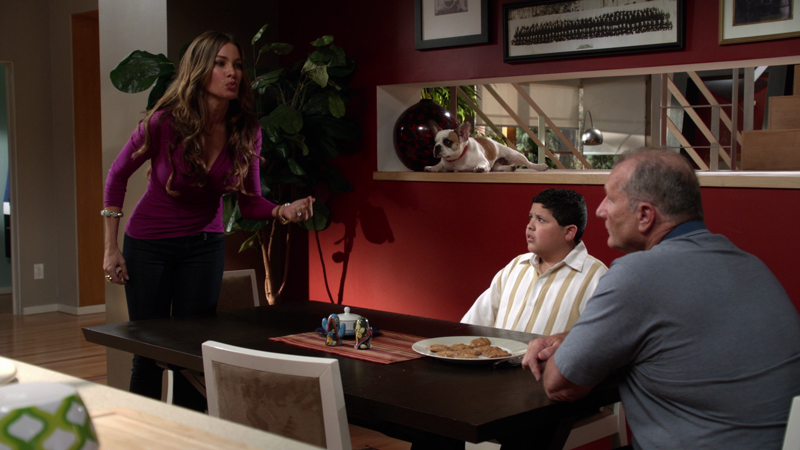 The Discs
The 24 episodes of the third season of Modern Family are spread across three dual-layer Blu-Ray discs, which are packed in a standard-width Blu-Ray keepcase with a dual-hubbed tray. Each disc's animated menu features options to to play all the episodes, select shows, adjust the set-up and check out the extras. There are no audio options but subtitles are available in English SDH, Spanish and French. The set once again includes Season Mode, which keeps track of which episodes you've watched and offers a menu of all the episodes, telling you which disc to put in to watch them. This could be of great value if you could jump from disc to disc in a disc changer, but here it's mainly just informative.

The Quality
The 1080p, AVC-ended transfers are as good as you're going to get for this series, as the crisp image, full of fine detail and rich color, makes every episode look terrific. Considering the documentary feel of the show, the skintones and black leves are appropriate, and the only time you're going to notice anything off is when the hand-held camerawork goes out of focus (normally in a moment of familial chaos.) There are no noticeable issues with compression artifacts or any other distractions either.

The DTS-HD Master Audio 5.1 tracks are consistent with the previous releases, keeping the majority of the sound in the center channel, thanks to the show's focus on dialogue, while the side and rear speakers handle the mostly subtle atmospheric elements and the score. Everything is clear and free of distortion, and while there's nothing dynamic or thumping to test your system, it's all handled quite well.

The Extras
As in the past, sadly there are no audio commentaries, so instead you start off with over 22 minutes of deleted and alternate scenes, spread across the three discs. Thankfully it's mostly fully excised scenes, and not just a few seconds of different dialogue, and there are some very funny bits to be enjoyed, including the only coach interview with Lily to this point. Unfortunately, this is about 11 minutes less than last time.

The majority of the extras arrive in the form of several featurettes, starting with a trio of behind-the-scenes pieces focusing on the show's big event episodes, "Destination: Wyoming" (9:43), "A Modern Family Christmas" (5:59) and "Modern Family Goes to Disneyland Resort" (3:11). Mixing a recap of the episodes with interviews and on-set footage, they could offer more material than we've already seen, but they do provide some interesting insight, like an explanation of the practical snow effects in the Express Christmas episode. "Driving Lessons" (2:55) is similar, just focusing on Luke and Manny's driving adventure, but there's not a lot to it.

There are a couple of on-set featurettes with the actors, as you get to spend some time with Burrell in "A Day on the Set with Ty" (5:38), watching as he preps for the day and talks with Breaking Bad's Bryan Cranston, who returned to his sitcom roots and directed an episode this season. Meanwhile, "Adventures of the Modern Family Kids" (3:35) follows the younger castmembers (sans Hyland) as they fill time with various activities on the set of their Wyoming episode.

The last featurette, and largest extra, is a nearly 17-minute look at O'Neill being honored with a star on the Hollywood Walk of Fame. The whole affair is a bit weird, taking place alongside a busy street, with the accompanying traffic noise, but hearing from the genuinely likable O'Neill, as well as his famed TV wives, Katey Segal and Vergara, makes it worth watching.

The final extra is a nine-minute gag reel, which disappointingly includes a great deal of physical comedy that was actually in the show. While you'll get a few smiles out of the screw-ups (especially the rather joyful Vergara), overall, you'd expect more laughs from a show that's so funny. 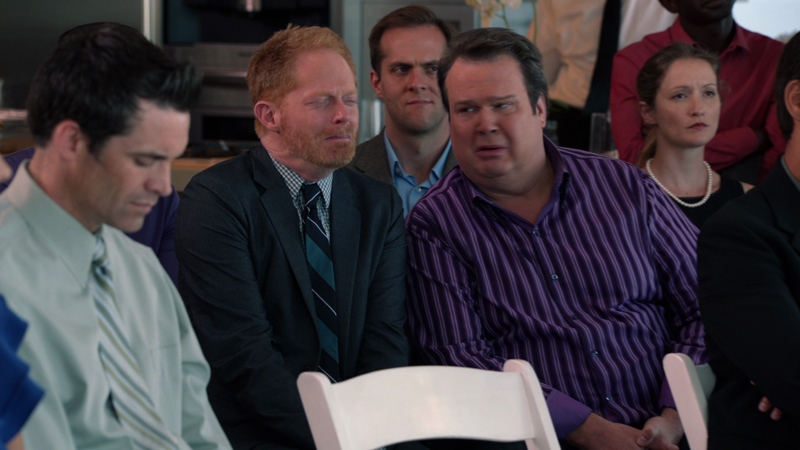 The Bottom Line
A third-straight Emmy for a show that keeps up its pace as the funniest traditional sitcom on TV. It'll be a sad day when we can't peek in on the Pritchett clan and their misadventures, but at least we'll have these sets, with their fine quality and enjoyable extras (even if they are getting slimmer over time.) If you've never watched, you can pick up anywhere in the series, and if you have, here's a chance to revisit TV's funniest family.