House of Lies: Season One 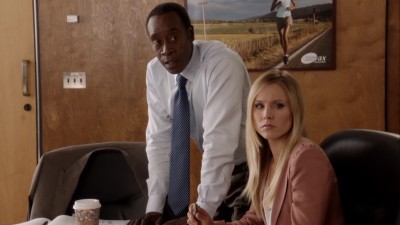 House of Lies is a dark-comedy (so to speak) about a management consultant and his team of experts who work to "consult" with big businesses and corporations in a way that is all about revenue and the financial stream and little about what is right. The expert consultant? Marty Kaan (Don Cheadle). His crew of consultants includes Jeannie (Kristen Bell), Clyde (Ben Schwartz), and Doug (Josh Lawson). This is one A-class consultant team that cares about bringing in the big moolah and (usually) little else.

This series centers upon Marty as the main character. You get to spend more time with his character than any other character on the show. In some ways, you even get to spend some expanded time with his family (his elderly father, his openly bisexual son, and his ex-wife) essentially to a greater degree than you get to in regards to his team of business-people.

Marty is a conniving and determined individual who wants to make his life be all about his business and not about his family. He tries to be as involved in work as possible so as to be capable of avoiding as much of his personal life problems as possible. He'll avoid his kids school-play performances if he can, and spend extra time at work if it means avoiding his personal life. He occasionally has moments where he seems concerned about his personal relationships and lifestyle but then he'll spend another minute or so going down a routine suggesting he is just as unhappy and happy in his business as per usual. 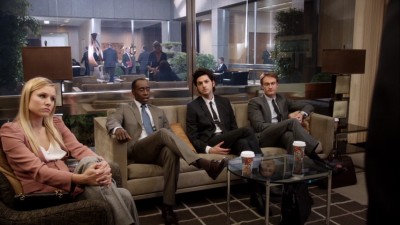 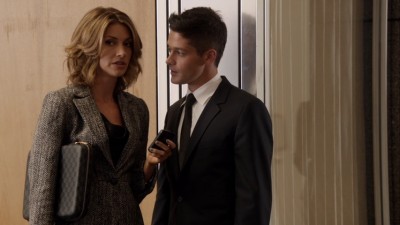 The story that exists with Season 1 of House of Lies centers primarily on establishing the character Marty and introducing the audience to his family and co-workers while trying (unsuccessfully) to focus on a plot-line about a business merger with high-stakes which ultimately could lead to the demise and firing of Marty, Jeannie, Clyde, and Doug (and apparently countless others at the firm, too).

Everyone seems to be worried about facing the potential wrath of "the Rainmaker" (Griffin Dunne), who has been sleeping with women around the business and has been promising promotions that sound promising and safety with the merger. Jeannie is one of the scared employees hoping for security. She's also presently engaged, and to someone she isn't so connected to. She can barely stand her fiancée. This is about as much knowledge we gain concerning leading-lady Kristin Bell's character. At least it's more than can be said about supporting goofball characters Clyde and Doug (who so far seem to only be used for some comedic support, which is rather interesting seeing as how nothing on this series is funny).

Therein lies (pun?) my biggest gripe with House of Lies: This. Is. Not. A. Funny. Show. Something advertised and promoted as a comedy (and that seemingly thinks that it's an amazingly hilarious series to boot) is downright annoying, even more so when it has an interesting cast that consists of people as talented as Don Cheadle and Kristin Bell. This definitely disappoints as a series. I was so looking forward to this show. 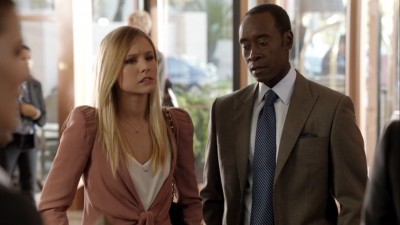 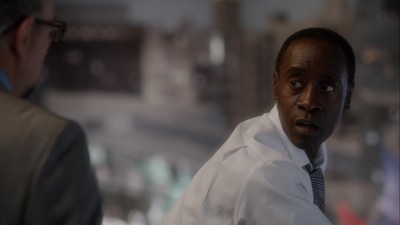 I loved Kristin Bell from Veronica Mars and Don Cheadle from a variety of feature films. Showtime producing a series starring the two of them seemed promising from the get-go. Unfortunately, the series was created by Matthew Carnahan (The Grey, The A-Team). It surprised me that he was involved in a series. Carnahan does comedy? Apparently. But absolutely not well done comedy.

House of Lies only becomes interesting when it's focused on the dramatic elements. I was intrigued when the series offered a plotline about Marty becoming series about seeing a girlfriend (who also became involved in his family life). By the end of the season? This interesting plotline was dropped. I was intrigued when the series introduced the fiancée apparently engaged to the barely developed character of Jeannie. That is, until it took a ridiculous amount of episodes before this element was even brought up again (which is something only handled in the finale, and it wasn't handled all too well as a plot-point). 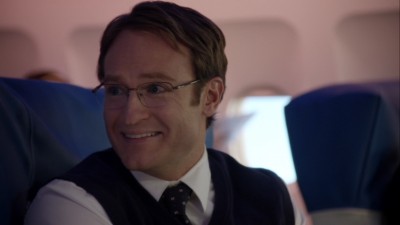 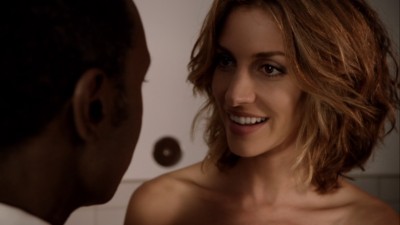 This series would have a good dramatic moment and then it would crash, surrounded by remarkably subpar and grating humor and plot-lines involving generic opportunities the consulting team led by Marty would have. It became episodic and fast and the humor is something that could not be expected - only attempts at humor (and it never did work).

The plotlines introduced weren't that good. Nothing about this show was that good. It skated by based solely on the excellent acting by several performers who continued to be dedicated to the show even as the writers of House of Lies didn't seem to be capable of coming up with anything that interesting for these characters to do and for these actors to capably perform.

Most of the best moments from House of Lies seem to come from Don Cheadle performing subtle material that doesn't feel written or suggested by a director. I would say the greatest strength of the series is Don Cheadle winging it as a character so badly written that he has essentially come up with his own way of attempting to dramatically elevate the series. 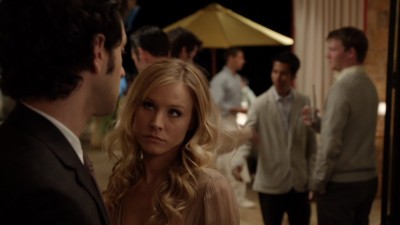 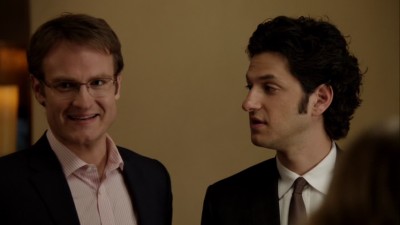 I haven't even mentioned the score yet. This series has one of the worst scores that I have heard accompanying a high-profile series. House of Lies is scored by Mark Mothersbaugh (of Devo fame and who has composed music for many television series and films, including several by Wes Anderson). I have enjoyed the music of Mark Mothersbaugh before. I do not enjoy it on House of Lies. It sounds like he's completely phoning it in. Nothing has even remotely come close to a score as bad sounding as this one. Not even other recent scores by Mothersbaugh.

None of these detractors make the prospect of another season more promising or exciting. This is a flat and uninvolving series: one that is only occasionally capable of finding moments of worth from actors in determination of finding something to do with their poorly written characters.  This series really seems to be out of gas (and after only twelve episodes). Some major revamping will need to be done to this series if they want it to last beyond a second season. I would call this one of TV's most disappointing introductory seasons of a high profile series produced by a network now known for making great television. 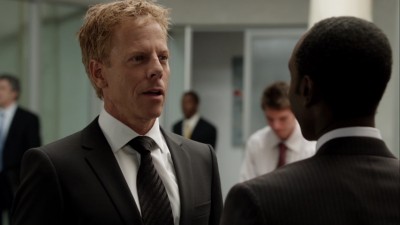 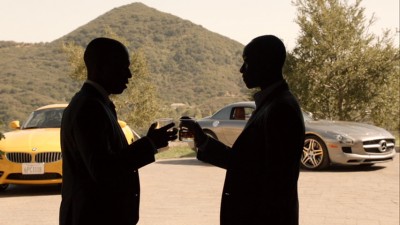 House of Lies is presented in its original television broadcast aspect ratio of 1.78:1. The series is not that interesting visually. This DVD presentation isn't all that impressive either. Colors seem to be rather flat and compression is not the greatest. There are obvious moments of compression problems where pixilation and a general lack of good clarity can be found. The series simply is not going to impress visually. There are moments where the show looks just fine: clean, slickly produced, and well defined. Yet the series could have looked better than it does on this release.

The 5.1 Dolby Digital audio isn't that interesting. The music is the main thing that seems to benefit from the surround stage, and that seems unfortunate given that the music score isn't really all that good. Spanish 2.0 audio and English SDH subtitles are also provided.

There are only a few supplements on this release: commentaries on the season premiere and finale.

There are also a number of short featurettes: Hanging with Kristin Bell, Hanging with Don Cheadle, Rainmaker, and Marty Kaan Profile. Each piece lasts only 2 or 3 minute and is essentially fluff material. The interviews with Kristin Bell and Don Cheadle actually are interesting enough in that they contain some cool facts about both of them, but these are ridiculously brief and they don't elaborate on this series in the slightest. 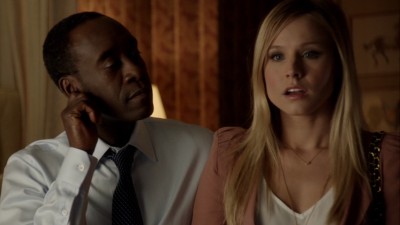 House of Lies seemed to be a promising series based upon the cast alone. Unfortunately, everything about this series is unfunny and it's aiming to be a hilarious comedy series. Something about it just doesn't work. It only works when it's being more dramatic. Those moments are few and far between and the excellent cast just can't carry the weak writing.