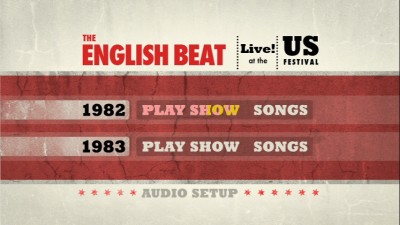 The English Beat--or as they were known in their native Britain, the Beat--emerged from the post-punk scene, part of what is generally referred to as 2-Tone Ska, a movement that included the Specials and Madness. The Beat were fronted by vocalist Dave Wakeling and toastmaster Ranking Roger, who together were a dynamic duo that prefigured the hip-hop tradition of pairing R&B singers with MCs. Their songs fit nicely on the radio with other early 1980s new wave acts, standing out for how strongly the melodies were driven by their horn section. They broke up in 1983 after three albums, with half the band becoming General Public and the other half forming Fine Young Cannibals.

Shout! Factory's The English Beat: Live at the US Festival '82 & '83 set showcases the band at the height of their career, with two concerts, one in September of 1982 and the other in May the following year. In between, they released their final album, Special Beat Service, which spawned the hits "I Confess" and "Save it For Later." The latter was memorably covered by Pete Townshend, and it's also the first Beat song I remember hearing--or more precisely, seeing. The video showed up regularly on the Richard Blade-hosted music show that ran five days a week on a local station in Los Angeles.

I know I saw a bunch of US Festival performances on television back then, but I don't recall if I saw either of the ones featured here. Apparently the Beat and Oingo Boingo were the only bands to play both editions of the massive outdoor party, so there was a good chance I might have. In terms of set quality, the two shows are virtually interchangeable. There is a noticeable uptick in energy for the second concert. I don't known if the band had been on tour and so had tightened up on the road, or if perhaps they had just come off a reinvigorating break, but they seem to be on a bit more of a high. Roger in particular is all over the place, earning his Ranking nickname. We also get treated to the band's fantastic cover of "Tears of a Clown."

It's easy to see why these shows were resurrected from the vault. The English Beat: Live at the US Festival '82 & '83 shows a band at the top of their game. While there were bigger, more muscular acts playing these dates--a big focus was on hard rock--they would have had a hard time competing with the Beat. If you're a fan of the band, this compilation is a no-brainer. If you don't know, give it a look, you will likely end up impressed. 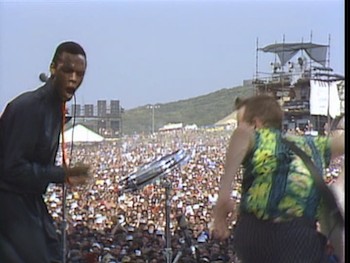 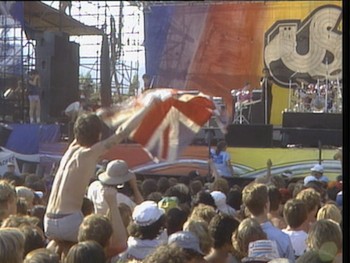 Songs marked with a * indicate that they were also included on the bonus CD compilation.

Video/Sound:
In terms of picture quality, the shows look pretty damn good for a live TV production from the period. The source masters appear to have been preserved well (excepting the lost songs), and Shout! have done a great job of bringing the concerts to disc. The resolution isn't super sharp, particularly in the wider shots, and you see some video lines every once in a while, but both of those things are really just the nature of the recording, not of the digital mastering.

Two audio mixes are provided, a 5.1 mix in Dolby Digital and a more standard 2.0 mix. There is a noticeable difference when you toggle between the two. Though the 5.1 doesn't exactly give you the feeling of "being there," it does, of course, fill the room, making it so the music is all around you. Vocals also take a more natural spot in the mix. The added channels are most noticeable, actually, between songs, when you can hear the clapping extending all the way back, almost sounding like static in the rear speakers. That said, the 2.0 track is no stinker: it should serve anyone well who goes that route. 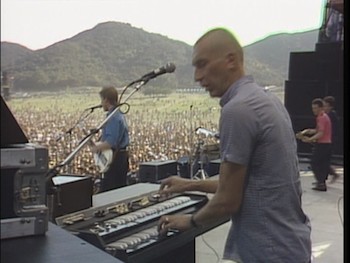 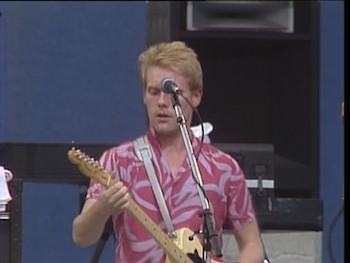 Extras:
The English Beat: Live at the US Festival '82 & '83 comes packaged in a standard-sized CD jewel case with a hinged interior tray to hold the two discs. Both concerts are on one DVD, while tracks from the shows are also compiled on a bonus audio CD. As noted above, the songs that were ported over are marked with a * in the concert lists. Basically, the CD edits the two shows down to one complete concert.

FINAL THOUGHTS:
The English Beat: Live at the US Festival '82 & '83 gives us two awesome outdoor sets from the influential and much-loved (at least by people of refined taste) early '80s band responsible for hits like "Mirror in the Bathroom," "I Confess," and "Save it For Later" (all of which are represented here). Capturing the band on tour for their last album, the concert DVD shows them at the top of their game. Shout! Factory has found some great source material for this, and the full audio mix is killer. Highly Recommended. 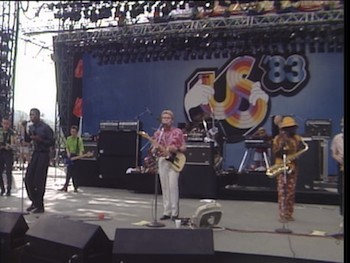 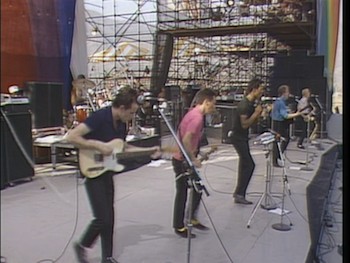