Going by its garish torso-on-pink cover design, you'd be forgiven for thinking that the DVD for the 2009 feature film House of Boys was a gay skin flick. Sure, it does have moments of brazen sexuality. Mostly, however, this '80s-set drama serves as an understated coming-of-age tale. It's a little bit of everything, actually - surrogate family comedy, New Wave musical, unflinching chronicle of the early years of AIDS. In all honesty, it fails to score on any of those counts, but at least the film has more ambition than the average "go-go boy makes good" fare.

The film's title comes from the tawdry Amsterdam nightclub where the main character - an outgoing teen named Frank (charmingly played by Layke Anderson) - has escaped a stifling life in suburbia to work as a dancer. The club is run by the imperious Madame (Udo Kier), who occasionally performs elaborate drag numbers set to opera arias, and the bar-tending Emma (Eleanor David), a friendly woman who acts as mother hen to younger dancers like Frank. He eventually bonds with the other young men boarding with him at the club, all gay or questioning youths who traveled from far-off distances to find a welcoming community. The other dancers include Frank's roommate Jake (Benn Northover), an American who is dating a local woman, Angelo (Steven Webb), a chatty and gregarious pre-op transsexual, and Dean (Luke Wilkins), a brooding street artist with a bright green mohawk. Amidst performance clips scored to the likes of Soft Cell, Spandau Ballet and Roy Orbison (?), Frank quickly learns the tricks of the bump-and-grind trade and becomes the club's main attraction. Dancing also brings the attention of Madame's regulars, wealthy men who pay extra for certain favors from the hottest boys. The arrangement works out well for Frank, but it also arouses jealousy in Jake (who previously had that position, despite his odd looks).

Instead of constantly being at each others' throats, however Frank and Jake fall into a mutually supportive, tender relationship. When Jake starts getting sick - ill enough to be let go from the House of Boys stable, in fact - Frank quits to help take care of him in the protective confines of Emma's home. It is here that this already fragmented film takes yet another detour, when Jake sees a doctor (Stephen Fry) who deduces that the young man's lethargy, skin lesions, and compromised immune system shares similarities to what befell several gay men like him in the U.S. In depicting Jake's heartbreaking progress as he slowly and painfully succumbs to AIDS, the film does a generally good job (the makeup is especially noteworthy). Layke Anderson and Benn Northover contribute good performances as well. While intense, it's not as satisfying as the film's depiction of the New Wave surrogate family that Frank and Jake have at the House of Boys. 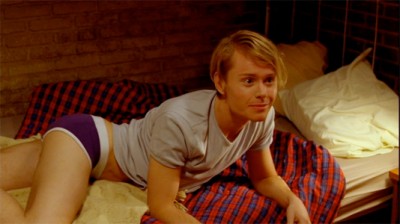 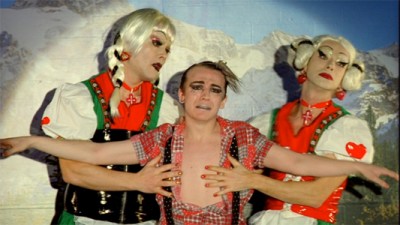 The fact that House of Boys marks the first time that co-screenwriter Jean-Claude Schlim directed a feature film is telling. Schlim takes on a "try everything and hope it sticks" approach here, which makes for some drawn-out, inconsistent viewing. For instance, before Frank even makes his way to the House of Boys, we are subjected to a dreamlike sequence with a young boy running through a corn field, an inconsequential high school locker room confrontation scene, and some strange, Glee-like coordinated dancing. Why? The scenes with Frank at home have a finely honed tension, and there's some appealing joie de vivre going on with the House of Boys crew in their backstage quarters. The performance sequences are fun as well (in a way, they reminded me of The Adventures of Priscilla, Queen of the Desert). There's just too many of them, eventually becoming a redundancy. Schlim's main concern with this film is conveying the tragedy of AIDS on his characters' carefree universe, but the impact is lessened with too many irrelevant scenes preceding it. 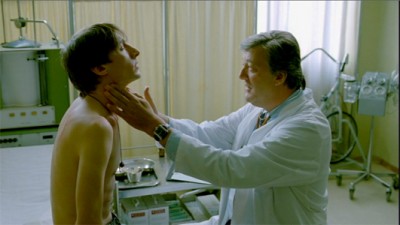 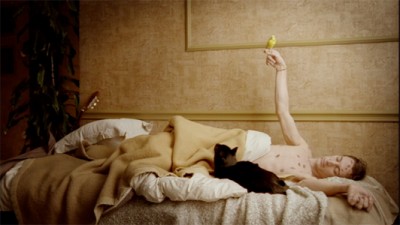 Breaking Glass Pictures' DVD edition of House of Boys presents the film in a good 16x9 image with lush, not too saturated color, pleasant highlights and rich darks. The mastering, while decent, had a few problems in a few instances when the picture got overly pixelated and movement had a noticeable shimmer.

The 5.1 Surround audio on this disc is pretty nice all around, a good showcase for the many instances where the music intermingles with the dialogue. It's a well-done track with no instances of bad mixing or distortion.

The bonus content on House of Boys includes a 10-1/2 minute Behind-The-Scenes Video consisting of negligible candid footage of crew members prepping various scenes from the film. The disc also contains nearly an hour of individual Interviews with writer-director Jean-Cleade Schlim, director of photography Carlo Thiel, and actors Benn Northover, Udo Kier, Stephen Fry and Steven Webb (Layke Anderson is strangely absent). A theatrical trailer and previews for other Breaking Glass DVDs round out the extras.

Nostalgic recreation of early '80s Euro-decadence or searing portrait of the early years of AIDS? House of Boys tries to have it both ways, never quite succeeding as a whole. Decent performances and stunning photography make this film a cut above most gay-oriented DVD fare, but even on those terms it isn't worth owning. Rent It.