*I will preface this article by saying that there will be minor spoilers throughout, so if you haven't seen season 7 then it's best to skip it until you have. Thanks.

It's cool that Supernatural always starts us off with a previous season recap, because all I remembered from season 6 was that Lucifer was put into a 'cage' where he would torture Sam's soul, along with the Civil War in Heaven that has killed many, many angels. Castiel (Misha Collins) was the big hero at the end of season 6 and had assumed the mantle of God after absorbing all of the souls in Purgatory. This, of course, was all a fluke since God did not possess him - The Leviathan possessed him. The Leviathan is a group of demons that lived in Purgatory long before man was even considered to exist. Now these demons wanted out into the world and wanted to take it over as their new domain.

Sam (Jared Padalecki) and Dean (Jensen Ackles) and company have got their work cut out for them. Dean for the most part is a raging alcoholic, and Sam is still seeing Lucifer (Mark Pellegrino) wherever he goes. Bobby (Jim Beaver) is in tow and will help the boys in their quest to rid the world of demons and monsters once and for all.

The main story-arc in season 7 is that the Winchester brothers have to stop the Leviathan before they take over the world. It's not an easy task, because the Leviathan can assume the identity of any individual by a mere touch and cannot be killed by anything. In fact they can only be temporarily immobilized by decapitation and Borax. I'd say that the Leviathan story-arc is roughly 65-75% of the main drive in season 7 and the rest is left to stand-alone episodes and a couple of loose tie-ins to characters that have died or will die in season 7.

It's a pretty good balance, but all is not perfect in this season. My one and only nitpick is the return of Lucifer. Yes, Lucifer may be trapped in the 'cage,' but he still pays Sam visits and tortures his mind. This would be totally cool and neat if it wasn't played for laughs. Lucifer is annoying as hell and waaaaaaaaaaay too playful. It's a farce, and for the first time ever I wanted him gone. I'm sure he'll be back at some point, but he was pretty useless in this season.

My favorite episode in season 7 would have to be the one entitled Time After Time After Time, where Dean follows a demon named Cronos through a portal that sends him back to 1944 to fight alongside Elliott Ness (Nicholas Lea) (Yes, that's Alex Krycek from the X-Files). Mr. Ness is also a hunter who takes down demons and gangsters. They went all out on that episode production-wise. Another neat stand-alone episode that will make a lot of grown ups inner-teens wet themselves is called Shut Up, Dr. Phil, which has Charisma Carpenter and James Marsters (Yes, Cordelia and Spike from TV's Buffy the Vampire Slayer) playing a married couple with a dark secret. The nods to their previous work will make you smile. It's a fun episode. Lastly;nerds unite! We also get a very special episode with nerd Goddess Felicia Day that figures into the Leviathan storyline really well. We all love Felicia Day, and so can you!

Supernatural has kind of strayed in that it used to be just about the monsters - they were almost mini-films that paid tribute or did their own take on previously explored material in the horror world. Understandably with the show's success the studio wanted to keep that momentum going, so they incorporated various story-lines that took or will take several seasons to pan out. This is why series creator and frontrunner Eric Kripke is longer the point man on the show, although he still works on the show as a consulting producer.

Personally, I am enjoying the show, and will look forward to season 8, which I hear may be the final season, but if you're just getting into the show, then you've got some catching up to do.

Supernatural: The Complete Seventh Season is now available on DVD and Blu-ray.

The Girl Next Door

Season 7, Time For A Wedding!

How To Win Friends And Influence Monsters

Out With The Old

The Girl With The Dungeons And Dragons Tattoo

There Will Be Blood

Survival Of The Fittest 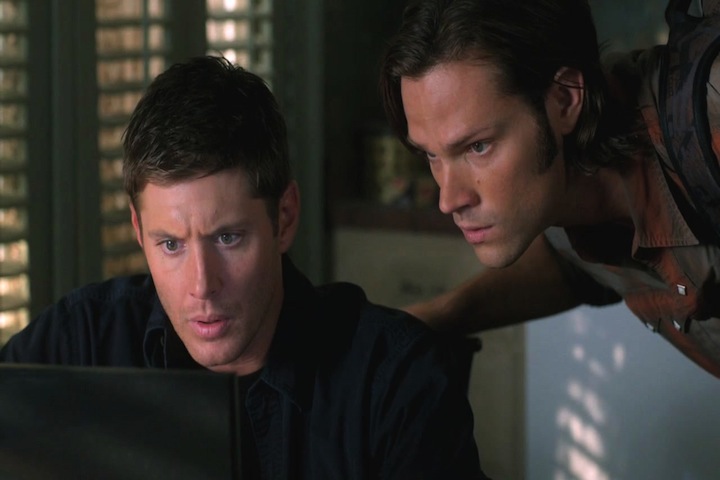 Supernatural: The Complete Seventh Season is presented in 1.78:1, widescreen. Supernatural has always looked pretty good on DVD and Blu-ray, but since I am reviewing the DVD, I will say that it's leaps and bounds better looking than other shows of the same caliber. Flesh tones look natural and never look flushed unless they need to be. Black levels do remain deep and inky, but do crush here and there. Edge enhancement also creeps up in spots. Softness also makes an appearance, but that's only found in scenes of heavy cgi use. Grain is present, which I love, and gives it that gritty look to the print. Supernatural looks as good as it will ever look on DVD. 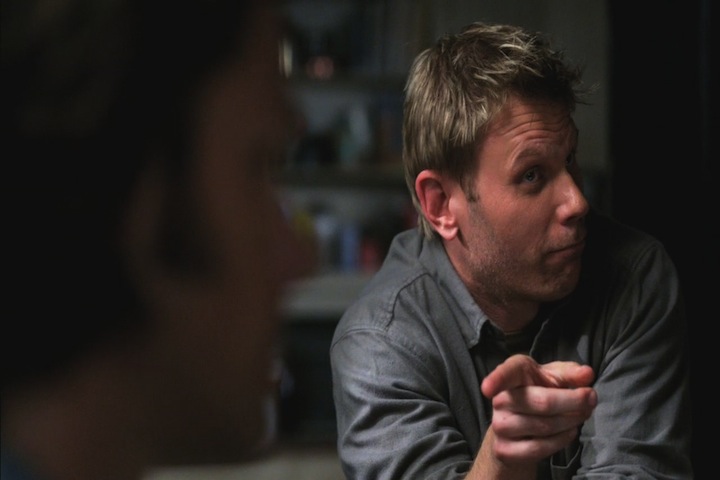 Supernatural: The Complete Seventh Season is presented in Dolby Digital 5.1 @384kbps. Yeah, that's weak sauce, but it is DVD. Hell, I'm currently watching a sitcom that I am prepping for review next (Whitney: The Complete First Season) and even that show's Dolby Digital soundtrack is at 448 kbps, so watching Supernatural with such a low sound bit-rate concerned me initially. Good thing the sound engineers new what they were doing, because Supernatural's seventh season actually rocks. Dialogue is clean, crisp, and sharp. You'll hear every syllable in whatever language that they're being conjured in without fail. The surround channels handle all the things that go bump in the night including the creepy voices that always preface each episode during the exploding Supernatural logo-intro really well. During effect heavy sequences or during spells that envelop the characters - the speakers reproduce sounds as if we're the ones being possessed or exorcised. It's a very good track! 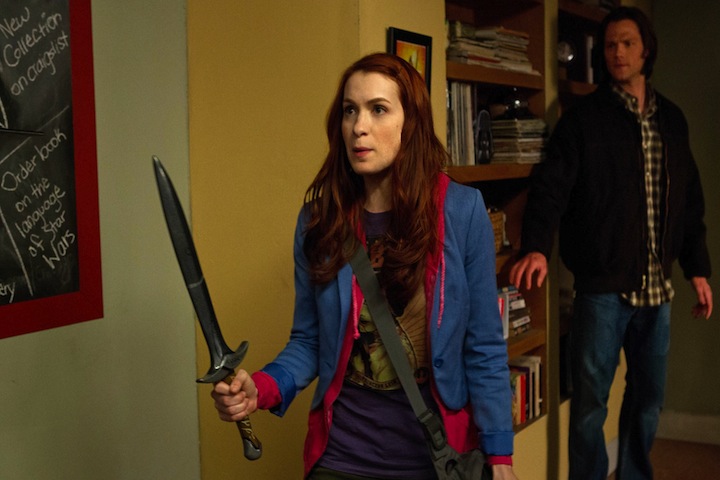 The extras on this 6-disc DVD boxed set are about the same as what was one the last sets since the show's inception. We get many commentaries by the show's cast and crew on selected episodes in addition to many deleted scenes on selected episodes, as well. The main special features on this set can be found on disc number six and include a cool featurette on scoring Time After Time After Time - two composers as opposed to the usual one scored it. There's a really cool featurette that focuses on all seven directors that contributed to season six. Unaired scenes and the classic Supernatural gag reel (the best gag reels belong to Supernatural bar none) round out the boxed set. 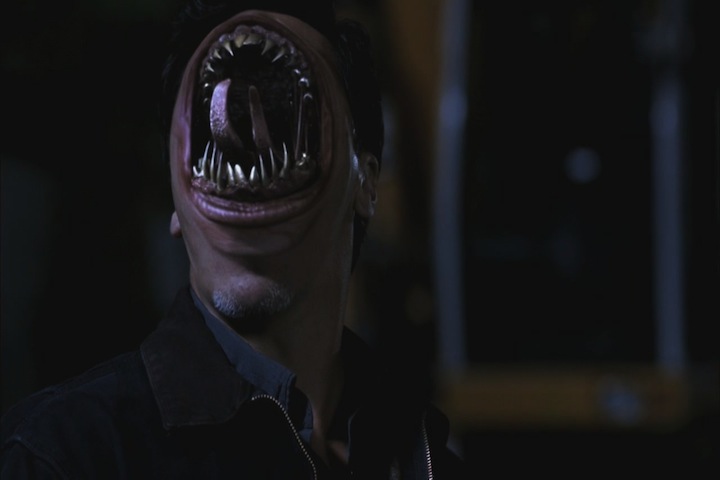 What can I say that hasn't already been said? I'd follow Sam and Dean to the ends of the Earth, Hell, and everywhere in between. Each episode brings a new and sometimes creative adventure. The DVD set features average video specs, but above average sound (considering the low bit-rate) and the special features is also pretty neat. I know we've got at least one more season to go and I am frothing at the mouth for more. Get yer rock salts!