Confessions of an Opium Eater


"There is a devil in a drunkard, and a ghost in a poet." 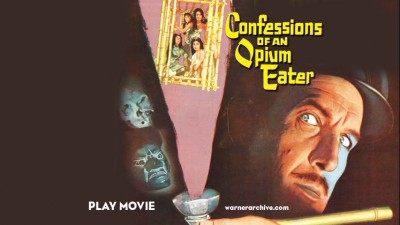 This movie is nuts.

In the first ten minutes of Confessions of an Opium Eater, a white slaver ship leaving Asia dumps its human cargo onto a schooner to avoid the oncoming inspection boat. The main ship is then blown up by the authorities anyway. (Or at least I think so. The attack is represented by cannon fire and a full-screen explosion, no direct contact is seen.) The schooner hits the beach, only for locals who live there to attack the incoming sailors. Everyone scatters in the battle. A couple of the guys fight with spears and poles. One of them is knocked off a cliff by a horse. Yes, a horse. It comes from nowhere, and it apparently hates slave traders just like anyone else.

And again, that's just the first ten minutes. We haven't even seen Vincent Price yet. His voice comes over the speakers so he can introduce himself and tell us it's the early 20th Century and he's in San Francisco for a "predestined rendezvous." Price plays Gilbert De Quincey, a gun-running scoundrel with connections to the Ling Tang gang. He comes to Chinatown in the middle of a territorial war. The Tong are trying to shut down the girl and opium trade, and Gilbert gets tangled up in it. Hatchet-wielding killers chase him in the street, and he discovers that there is going to be an auction that night to trade the kidnapped women for drugs. Gilbert has taken a liking to one panicked teenager, and he promises to rescue her. 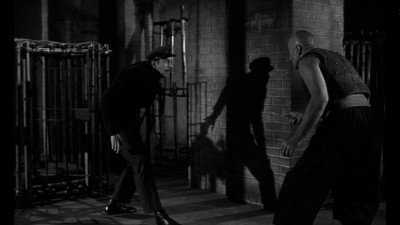 The rest of the movie actually stays entirely within the multi-level building where the auction is going to take place. Gilbert gets girls out of cages, teams up with an allegedly Chinese little person with vague hints of a New York accent, fights Mongols with scimitars, and at one point, yes, smokes opium. He stumbles into the smokehouse and has to take a pipe to get along. What follows is the film's most memorable sequence: after a montage of Gilbert's visions, he flees once gain--but this time in complete silence and in slow motion. He is still hallucinating! It's surprisingly hypnotic despite being fairly garden-variety psychedelia.

Confessions of an Opium Eater was released in 1962. It was produced and directed by Albert Zugsmith, whose list of other credits reads like a what's what in exploitation. (Sex Kittens Go to College, The Private Lives of Adam and Eve, Psychedelic Sexualis, to name just a couple.) His goal here is definitely to create something lurid, using racial misconceptions and the white man's fascination with the "unknown" to create an exotic spectacle. There are dancing girls, dragon kites, and a whole cast of Asian actors speaking in broken philosophical bons mot. Price walks through the production as if he were just as baffled by it as the rest of us, with his central motivation perhaps being plausible deniability. ("I didn't even know what was happening, how could I know it was racist?") Zugsmith uses quick cuts, non-sequitur images, and dizzying zooms to create a sense of disorientation. The strategy seems to be that if none of it adds up, the movie can coast on its weirdness.

Except for as kooky as Confessions of an Opium Eater is, it lacks sizzle. The slow-pacing and threadbare story keep the film from ever kicking into gear. This means that at whatever level you are intrigued by the goings on, it's the interest of a disengaged observer. Like Price, you don't know where it's going or how it will end, you just sort of wait it out. 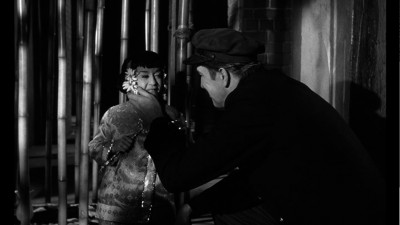 Video:
The widescreen black-and-white image is decent, but lacking. The image quality is patchy, with lots of hazy spots lingering in the frame. Print damage like scratches and dirt show up from time to time, but the overall problem is the resolution is generally soft. Nothing egregious, just average.

Sound:
The mono mix sounds clean and the dialogue comes through clear. Albert Glasser composed a pretty cool score for this, influenced in part by Asian music but also sounding weird and science-fictiony. The orchestration sounds pretty good, even in such a basic mix.

FINAL THOUGHTS:
Rent It. Confessions of an Opium Eater is definitely a fascinating curiosity. It's an exploitation picture that trades on the mythology of the "mysterious Orient," with Vincent Price playing a traveling mercenary who gets tangled in the net of a white-slavery ring. The 1962 B-movie prefigures psychedelic filmmaking to come, and director Albert Zugsmith has some interesting ideas about how to show Price's opium dreams, but the weirdness is not enough to overcome the flat scripting and racist caricatures. 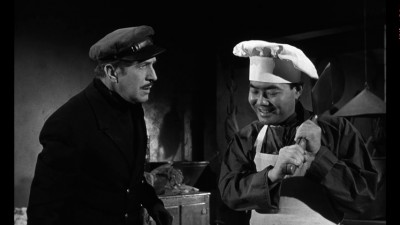