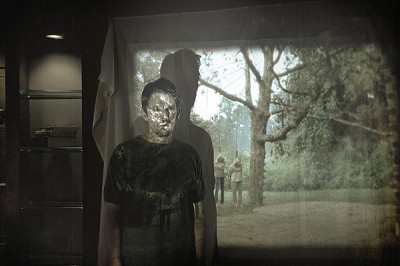 For Sinister, Ethan Hawke, who sometimes pretends to be a writer in real life, pretends to be one onscreen. In the movie, Hawke is Ellison Oswalt, a true crime author chasing the ghosts of his past success...and who will soon find himself being chased by actual ghosts, which he believes will be the key to his future success.

Ellison has a pattern of uprooting his family--wife, son, and daughter--whenever he is working on a new subject. He likes to get close to the crime scene he's writing about. This time, he has moved the Oswalt clan directly into the house where his subjects actually lived. Four people were hung in the backyard, and the youngest daughter of the murdered family went missing. This is a fact that Ellison keeps secret from his wife (the poorly cast Juliet Rylance), who wants to keep Ellison's grisly source material as far away from their kids as possible. 12-year-old Trevor (Michael Hall D'Addario) already suffers from night terrors, and little Ashley (Clare Foley) is an artist with an active imagination. Local law enforcement doesn't smile too kindly on Ellison's choice, either. They think he's just trying to stir up controversy.

Things take a turn for the weird when Ellison finds a projector and a box of Super 8 home movies under the floorboard in the attic. He watches the first of these, and he is shocked to discover that it's a snuff film showing the backyard hangings. All of the reels are of other killings, showing the elaborate murders of several families. In each case, the youngest kid was never found. Ellison starts digging into what connects the deaths and soon finds himself down a dark hole. Plus, spookiness ensues as things begin going bump in the night around his home. The projector gets turned on when no one is in the room, angry dogs show up on the property, and there are creaks and bangs and lots of jump scares. 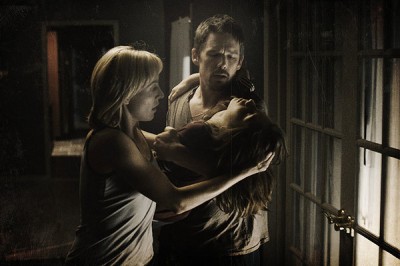 The tragedy of Sinister is that roughly half of the movie is pretty good. Director and co-writer Scott Derrickson (The Day the Earth Stood Still, The Exorcism of Emily Rose) knows how to build an uneasy, unsettling mood. Scenes of Ellison treading through dark hallways and peering around corners effectively put the audience on edge. Hawke's acting style, which is visceral and method-y, lends itself well to this type of movie. He seems genuinely scared and he knows how to show a guy losing his cool. The Super 8 films work fairly well, too, in spite of Christopher Young's intrusive musical scoring. (Is that supposed to be atmosphere, or are we supposed to believe the home movies have a soundtrack?)

Too bad most of those scenes build to very little on their own, and Derrickson fails to create much of a cumulative effect. As a filmmaker, he is better at depicting what is not seen than he is what we do see, which would otherwise work in his favor in a horror movie. The more that is revealed in Sinister, the less we buy the creepy goings-on. The supernatural elements are poorly designed and hokey. The killer looks like a parody of the villain from the Saw franchise, while the make-up on the apparitions is badly applied, clichéd, and cheaply done. Like Young's music, it's just too on-the-nose. Any intended subtext about the nature of found-footage films and the audience's culpability is either unintentional or discarded; it's far too obvious once you see "Mr. Boogie" that Derrickson and co-writer C. Robert Cargill are angling for some sequel money.

I will say, I wasn't really bored by Sinister, but my continued investment was in a vain hope that it would eventually turn around. Or maybe it was just I was enjoying seeing James Ransone, a.k.a. Ziggy from The Wire, get some good scenes as the eager police deputy who wants to get a line on the acknowledgements page in Ellison's book. I'm not sure. Either way, Sinister never delivers, there is no good story around the next shadowy corner. Quite the opposite, in fact. Derrickson blows it so hard in the end, it's actually kind of Bizarro impressive. Whatever good will he used to get us to the climax, he wastes it by wrapping everything up too quickly and to little satisfaction. Rather than just go for it and give us a bunch of final jolts, he simply stops Sinister cold. Which is also exactly how it's likely to leave audiences. 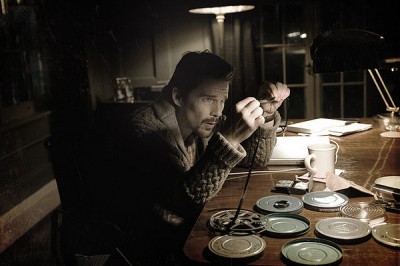