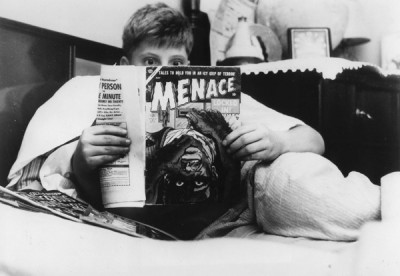 Ron Mann's 1988 Comic Book Confidential documentary serves as both a précis of comic book history up until that time as well as an essential snapshot of the era in which it was made. Comprised of interviews with industry veterans and newbie rebels alike, and decorated with lots of art and surprisingly effective animated visuals, it's at once scholarly and ebullient, treating the comic book medium with the respect it deserves without forgetting that, at their core, comic books are often some of the most fun a fellow can have for a fistful of dollars.

Starting off with William M. Gaines, founder of EC Comics, Mann traces the invention of the modern "pamphlet" comic back to the early 20th Century newspaper strips, working his way decade by decade, through the invention of superheroes, the use of comics as wartime entertainment, and on through the Senate hearings on the art form in the 1950s and the emergence of the underground scene in the 1970s. We go from Will Eisner to R. Crumb in rather swift fashion, hitting cultural high marks along the way. It's an interesting story, one that could easily be expanded on, though Mann's film benefits from his laser-like focus. It doesn't feel like he's giving any of his chosen subjects short shrift.

For its latter half, Comic Book Confidential settles down in the 1980s and looks at the then-new delivery systems for funnybooks and the mavericks who were changing the face of the industry. Some of those names are still familiar--Jaime Hernandez, Frank Miller, Lynda Barry, Art Spiegelman--while one or two have faded from memory. (I'll admit to having no idea who Shary Flenniken is.) I definitely had some pangs of nostalgia as comics covers from my youth passed by on the screen. "Oooh, there's a Dark Phoenix X-Men. And Nexus. And Grendel!"

For fans of comics, a lot of this will be familiar, but whether you're initiated or not, there is plenty going on in this lean documentary to keep it entertaining. The style is very 1980s, particularly while exploring the early decades, when Mann picks kitschy music from the various periods to enliven his collages and animation. (For some reason, Richard Elfman's Forbidden Zone kept coming to mind.) The director's best choice is having the featured creators read from their own work while panels pass by on screen. Hearing Eisner read from The Spirit, or a surprisingly genuine Stan Lee reading Spider-Man, is a real treat. My favorite, though, was Hernandez reading from and sketching addendums to an early Maggie and Hopey story from Love & Rockets. The 1950s illustration style of Charles Burns' Big Baby also lends itself really well to the animated style Mann uses, which is largely just shifting around the art that already exists. Turns out this "motion comics" malarkey publishers have tried to sell us as being innovative for the last couple of years is just as outdated as we always thought.

As much as the succinct delivery is a virtue for Comic Book Confidential, it's also the main drawback. The history of comic books could easily be its own Ken Burns-style series of documentaries. The extent of the deleted material on this disc bears proof of that, and this particular effort was completed more than twenty years ago, plenty has happened since. Even so, Ron Mann's loving tribute to the medium is well worth the time it does take, and hopefully it being readily available will get more people jazzed and encourage them to give some current comic books a try. It's still as vital a medium as when Comic Book Confidential was released, if not moreso, brimming with talent and, just like this movie, which has become a high-definition Blu-Ray two decades after its theatrical run, they are expanding into a bright, digital future. 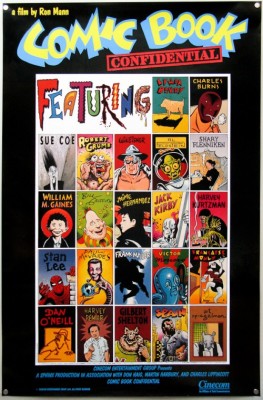 Video:
Comic Book Confidential is shown in its original widescreen aspect ratio of 1.85:1, digitally upgraded to 1080p. The overall image looks very good, with decent resolution and no real signs of artificial enhancement. It's not a knockout or anything, but it does appear to be a good example of what can be done with clean source material, a simple and conscientious port from film to high-definition digital. The general look of the transfer appears authentic to the original release.

Sound:
The soundtrack is mixed in Dolby stereo, with emphasis given to the talking heads, centering the interview subjects to give them prominence over any music or sound effects.

Extras:
The main extra to attract fans to the Comic Book Confidential Blu-Ray is the 40 minutes of deleted scenes and outtakes, both from professionals already in the movie (yay for more Harvey Kurtzman!) and also from folks who somehow failed to make the final cut at all. This includes such big names as Sergio Aragones, Dave Gibbons, Carl Barks, Jules Feiffer, Drew Friedman, Al Williamson, Archie Goodwin, Bill Sienkiewicz, Lee Mars, Julius Schwartz, Trina Robbins, and Gary Panter. Many of these folks are no longer with us, so that makes Comic Book Confidential even more important in terms of comic book history.

What the box bills as the "original promo comic book" for the movie proves not to be as interesting as that sounds. It's not even a comic book. It is, in essence, an illustrated press book, 22 frames in all, giving miniature biographies of the film's subjects along with a couple of pieces of art per artist. The main images actually corresponds with the panels designer/artist Paul Mavrides (who is also featured in an outtake) chose for the poster art, as seen here as the Blu-Ray cover. (Wikipedia claims there were longer reading sessions with the different participants on the old laser disc of Comic Book Confidential; I wonder what happened to those? Legal issues?)

Also presented as an on-disc gallery is "The Balloon Pops," a new essay by critic Geoff Pevere.

An archival video interview with Mann runs just over 7 minutes. He talks about his falling in love with filmmaking as a child, his documentarian philosophy, and his early education (or lack thereof). The discussion never makes its way to Comic Book Confidential.

There is also a new intro by filmmaker Kevin Smith, but by Kevin's rules regarding his work and critics, I'm not allowed to comment on said intro since I didn't pay for this disc, it was provided free for review. Just to be safe, I didn't even watch it. I am sure it's scintillating, though.

FINAL THOUGHTS:
Highly Recommended. Comic Book Confidential is somewhat legendary in comic book circles, and so it's great to see it getting a mass release updated for the 21st Century. Whether you like comic books, are indifferent to them, or don't know them at all, Ron Mann's 1988 documentary presents a great story, detailing the history of the medium and showing off the work of some of its most popular innovators. In other words, Comic Book Confidential is a movie anyone can enjoy regardless of their initial interest in the subject. Which is the mark of a good documentary. And of entertainment in general. Speaking of, can I interest you in some of my comics? [insert wink emoticon here]