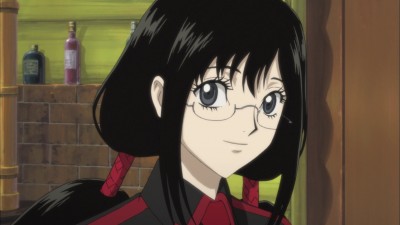 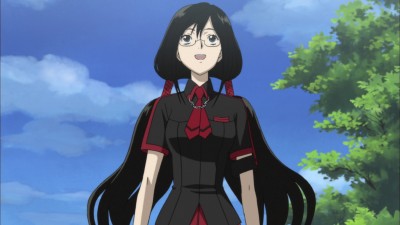 *Click on ALL images in this review for full 1080p screenshots.

I appreciate delving into an anime without being exposed to the hype beforehand, so having the opportunity to review Blood-C was an exciting prospect. Having watched the series in its entirety over the last few days, I came away with mixed feelings. I'll get to the pros and cons in a bit, but there's one thing everyone should know before investing their time and money on this anime - Many of the earlier episodes will test your patience. They will drag you listlessly through the halls of every high school cliché the genre has to offer, whereas the final moments will spring to life with clever and intense battle sequences that help the series live up to its name. As impressive as those sequences are, if you're anything like me, you'll probably be left wondering if the payoff was really worth sitting through the bore that preceded it. Although you might be tempted to give up on the series as a whole, I would strongly advise trudging through the parts that plod along to find out what Blood-C has to offer. If you're able to judge this series as a whole as opposed to its episodic fractioning, I suspect most viewers will walk away satisfied.

Our main character, Saya, is a clumsy schoolgirl who's so innocently sweet she'd rot your teeth. She sings little ditties on her walks to school, priorities are instantly curbed at the sight of cute animals, and she's completely oblivious to advances from the opposite sex. You'd almost think a quick glance in her psyche would reveal nothing more than fluffy clouds and pink unicorns galloping across the heavens. That being said, this isn't what makes her unique. No, most of her classmates are just as sickeningly sweet, each one doing little more than representing a genre stereotype - Joyful twins who are so alike they even speak in unison, the shy guy who just can't seem to master the tongue of romance, a girl who's loaded to the brim with attitude, and of course a quiet mystery man who strangely intrigues Saya more than a cute puppy ever could. A beautiful and likeable teacher round out this picture perfect classroom setting... and then things play out like a dreamy high school dramedy, at least for a while. 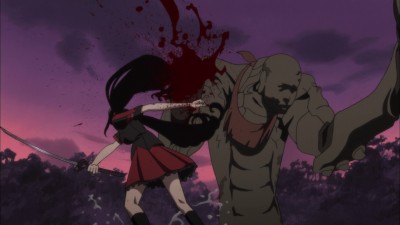 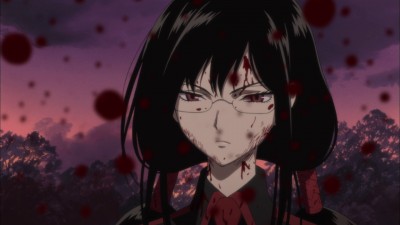 This is where I began to question if this 'reality' was merely a façade - The details were too neat and tidy, especially after finding out what Saya does to pass the time after school. When the sun goes down, a nightmarish looking creature awakens from its slumber, and Saya brandishes the only blade which can vanquish its evil forever. Although she has trouble standing on her own two feet by day, our heroine, trained by her father, allows focus to consume her being so she can (figuratively) transform into an effective monster slaying machine. Before long, she begins to understand things might not be as they seem, and those concerns begin to solidify when she realizes she can't remember large, important chunks of her past.

That's all that can be said without moving into heavy spoiler territory, but I have to admit - If it wasn't for the fact that something deeper and more ominous was hinted at from the beginning, I would have called it quits after the first two or three episodes. Thankfully, the meta take on cutesy high school anime begins to slide out of existence once Saya begins to suspect something's up. As a result, this anime is very much a slow burn, and once the secrets begin to peel back layer by layer, everything we've come to understand is shattered, finally revealing the plot twist that was teased from the start... which brings me back to my original question - Was the payoff worth slogging through the rest of it? 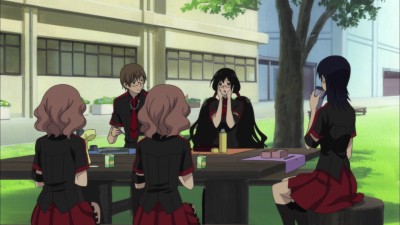 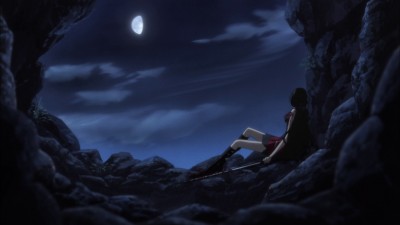 Once this mind-blowing revelation slowly begins to unravel, it not only helps to push the series into much needed dark and intense territory, but it also helps to make us realize the first few episodes weren't just mindless, god-awful filler. In retrospect, what the creative staff have done is genius - They were able to place me in Saya's shoes without making me the wiser. As Saya just sort of accepted her sugar coated reality, so did I (despite my suspicions). As the cloud of mystery began to subside, the truth not only shocked the main character, but me as well. It's intriguing as something of a cerebral meta experience, and all the bloodshed that happened as a result is merely the frosting on a well presented cake. So, yes, I felt the payoff was worth it and then some.

The only complaint I have is also sort of a biggie - Although Blood-C ends at a point that suits the series - that is to say the questions we're presented with are ultimately answered - there's still a lot of unfinished business left on the table. Now that Saya knows the truth about her past, what is she going to do about it? Where does she go from here? Don't get me wrong, I'm not one to criticize an ambiguous ending as long as it works, but Blood-C is desperately wanting some other kind of resolution. Thankfully, a Blood-C film was made and supposedly closes the remaining plot threads, but you won't find it in this collection. I don't have a press release for reference, but I'm willing to bet that FUNimation will be releasing that film in the immediate future.

So, all in all, if you're looking for an anime that delivers both substance and heavy gobs of gory fan-service, Blood-C is exactly what you've been waiting for. Just don't mistake this as a horror series - Although it offers lots of bloody mutilation, it's the air of mystery that takes precedence here. 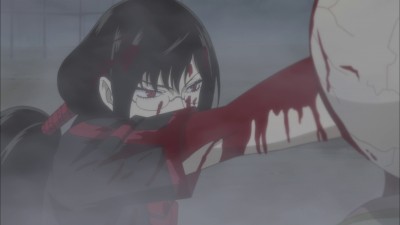 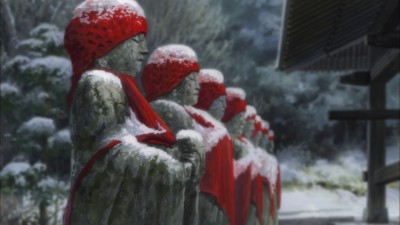 Blood-C splatters onto Blu-ray with an excellent 1080p, AVC encoded transfer (1.78:1). The series does exhibit something of an intentional haze, but outside of that, the lines are sharp, contrast levels are immaculate and black levels are deep and inky. Color saturation is also rather impressive, be it the colorful foods that Saya's favorite chef makes for her, or the pools of crimson that spray from the monsters that Saya slays on a regular basis. Edge enhancement is nowhere to be seen, nor are digital compression artifacts. The only real complain is a common one for FUNimation Entertainment releases - Banding. It's not as bad as on some of their other releases, but it's still present throughout the entirety of the series. FUNimation is known to put out some poor looking products from time to time, and their reputation is further stained with releasing upconverted material... but if Blood-C is an upconvert, I'd like to remain blissfully ignorant of the fact. Outside of the banding, this is one of the nicest looking releases I've seen from the studio in a while.

Blood-C features two tracks - English 5.1 Dolby TrueHD, and Japanese 2.0 Dolby TrueHD. I'm still not wholly used to saying this about anime (my knee-jerk, purist reaction is that you should go Japanese or go home), but I had the best experience with the English dub. The dialogue, as expected, is crisp and clean throughout the series entirety, but what really astonished me was just how much environmental ambience has been worked into the mix. Considering the series is meant to lull us into a false reality, the surround presentation really helps to sell it. The dynamic range is surprisingly wide for an anime. It would have been nice if the Japanese track was given the same treatment, but it is what it is. Ultimately, I think the Japanese dialogue is the way to go, but the actress who portrays Saya in the English dub is fantastic and I can't imagine watching the series without her as our blinded heroine. For what it's worth, the Japanese track is still aggressive when required to be, and even offers some respectable spacing up in the front. All in all, regardless of what track you choose you'll be pleasantly surprised, but my personal recommendation is that you experience the English dub.

Eh, no surprise here - Blood-C is light on supplemental material. That being said, there's two commentary tracks, which is a great deal more than some FUNi releases get treated to: 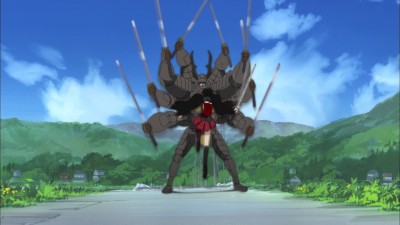 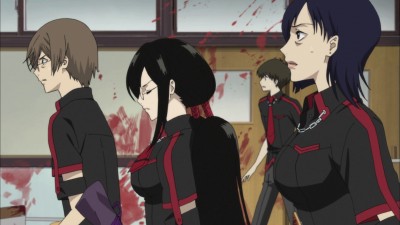 If you have the patience to invest a little time, Blood-C is best viewed as one continuous story. In this light, it will manipulate you cleverly while also delivering a satisfying amount of bloodshed (which doesn't actually seem all that gratuitous within the plot's context). Yes, the earlier episodes are a bit of a chore to sit through at first, and I understand this might turn some viewers away. Personally, I loved the slow burn storytelling, and the payoff made it all worthwhile and then some. My only complaint is that the end of the series really doesn't feel like 'the end', but that should be rectified soon enough when FUNimation releases the Blood-C movie on Blu-ray (which should be sooner, rather than later). For those of you who appreciates a story that takes its time to unfurl, this anime comes highly recommended. For anyone who doesn't have the patience to let things 'marinate' a bit, I still recommend you give Blood-C a shot. From an episodic standpoint, each episode still delivers stunning battles and lots of 'bloody' good stuff.