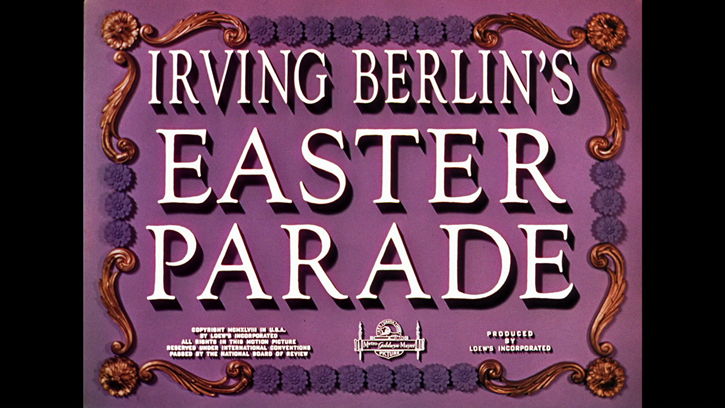 Irving Berlin's Easter Parade is one of the greatest film musicals. The film stars Judy Garland, Fred Astaire, Peter Lawford, and Ann Miller and each performer brings some of their greatest work to this "parade" of shows, featuring Academy Award winning music through adapted music score arranged by Johnny Green and Roger Edens. Easter Parade is one of the most ravishing and delightful experiences in musicals with energetic dancing, music, and great performances that make up the DNA of this romantic fable brimming with Hollywood's spectacle being presented at its absolute best.

The story begins with Don Hewes (Fred Astaire) getting ready for the next day's Easter Parade (which serves as a great way to showcase the dancing duo!) by buying a variety of gifts for his show-stopping dance partner Nadine Hale (Ann Miller). The unfortunate thing for Don is that he's in love with Nadine but the love he has for her is not returned as the mutual affection he hoped to find. Instead, Nadine seems much more interested in having a relationship with his friend Jonathan (Peter Lawford), who disregards her advances towards him, but she persists nonetheless.

Upon that night, Nadine informs Don that because her contract with him is finished she wants to work elsewhere in her own show and that she's already accepted an offer to showcase at another outlet. Don is heartbroken. Not only did he reject another offer to do a show that would pay him more, he was in love with Nadine and hoped that the two would be together on stage and in life. Disappointed and alone, Don retreats to a local bar for the night. There he sees a dancing girls troupe that includes Hannah Brown (Judy Garland), who he takes aside and offers a job as his dancing partner on the spot. Initially confused and wanting to reject his offer, Hannah realizes quickly that he's the popular and beloved dancer Don Hewes. She goes to meet him after the encounter to take him up on his job offer. Hannah always wanted to be a professional dancer.

Don appears slightly confused and disappointed at her arrival to meet him. He was hoping to prove to Nadine that he could find another dancer that he could work with, train with, and be able to dance with at the following year's Easter Parade. He only did this because he wanted Nadine to know he could go on without her - that he could still live his life. 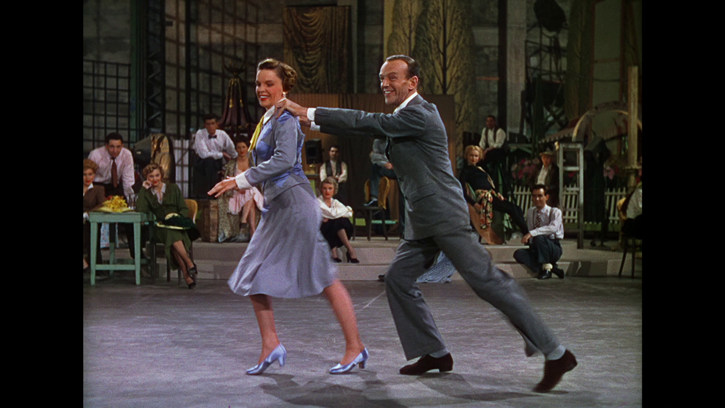 The newcomer Hannah informs Don that she quit her job after hearing his job offer and that she's ready to work with him. Don barely remembers everything he said to her that night. It alarms him that she already left her job because of his offer. Don soon realizes Hannah can barely dance at all and that the work they will have to do together will be greatly important beyond his expectations if they are to be a successful dance partnership. Yet he remembers sticking to his promise of a dance-partnership with her, and he also seems to recognize his necessary movement into a work scenario that doesn't involve Nadine.

As the working partnership continues the duo forms a wonderful unison and all their magical dance sequences seem to go off splendidly together; even better than either had imagined as possible. They start auditioning for performances and these auditions go over well too. The chance to be alongside a show featuring Nadine, who has found some success on her own, becomes something that Don decides to turn down as an offer.

Hannah begins to realize that she's in love with Don. Yet does Don love her as well? And because he began his working partnership with her just to try and prove something does it absolutely mean that the relationship ends there? Or could the two of them be together as dancing duo and happy couple?

Making matters more complicated is the friendship with Jonathan, who fell in love with Hannah after a rain-infused encounter ("A Fella With An Umbrella"), something which happened in a romantic moment before he even realized that Hannah was Don's new dance partner. He becomes infatuated with her but realizes his advances are futile.

The film is ultimately about the relationship between Don and Hannah. It is something which is initially all business, then grows to add friendship, and lastly romance. The story is about Don moving past Nadine's rejection, but more importantly, it is about two people with much in common falling in love with one another and finding happiness together.

This is the heart behind Easter Parade: the dance, the spectacle, the music, and everything else is merely a backdrop to this heartfelt story of two dancers finding (and realizing) who the love of their life is. 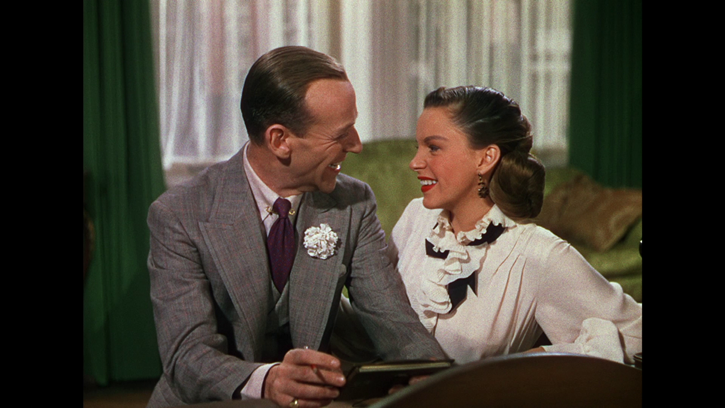 The film has some of the greatest song and dance numbers in the history of musicals. You'll be hard pressed to find that many musicals with as many old and new numbers as energetic, good fun, and impressive as what can be found on display here. Lyrics and music were by the great Irving Berlin.

Some of the standout tunes are "It Only Happens When I Dance With You", "Stepping Out With My Baby", and "A Couple of Swells", but all told there are seventeen wonderful song and dance numbers found in Easter Parade. Each number is undeniably special and adds to the immense charm of this genuine classic.

Surprisingly, one of the elements that stood out the most about this musical is all of the uses of humor found in it. There tends to be a good amount of humor in many of the great musicals of Hollywood but none of them are quite like Easter Parade in style or tone. There is a sarcastic undertone to some of the best moments in the film and it adds a special element to all of the proceedings that I found uniformly hilarious.

One of my favorite elements of the film is the humorous deadpan and energetic physical comedy from Jules Munshin in his essential supporting role. Munshin made his film acting debut with Easter Parade as the comical Headwaiter François. In an especially perfect scene, François details the history of a salad with gusto and enthusiasm unparalleled, and only to receive a response of "No thanks." from the inquirer - this is a moment of pure comic gold. 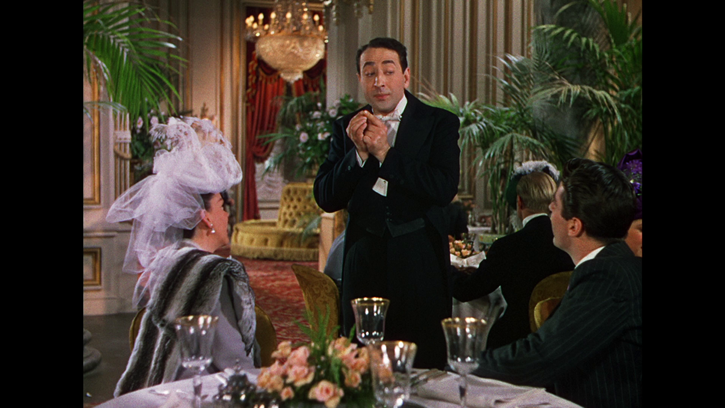 The script as a whole in remarkable and the songs were absolutely not the only thing helping to spotlight the immense craftsmanship of those involved in making the film. Easter Parade has a brilliantly told storyline of romance and ambition and it's perfectly in tune with the songs: it's something that makes the whole effort excel even more. The team of the three writers; Sidney Sheldon, Frances Goodrich, and Albert Hackett worked well: they were a perfect fit.

I was impressed by the multi-faceted layers of direction employed in the making of Easter Parade. Audiences were treated to the dance sequences directed by Robert Alton and the dramatic flair of director Charles Walters. Both director's make the most of their scenes. Everything contributed by both directors' blends seamlessly into one effort.

There are many moments where the direction is altogether playful, including a scene of slow-motion dancing by Fred Astaire that feels like a hypnotic dream. In one moment you may be swept off your feet through while experiencing the creative dance numbers and then perhaps become moved to tears by Walters' humanistic direction that brings forth the emotional and believable performances from the entire cast, especially from Judy Garland and Fred Astaire.

Easter's Parade is one of my favorite musicals and I am astonished by how much great work went into the making of this film. For anyone hoping to experience one of the great classic Hollywood musicals this is a perfect opportunity to do so, with a stunning Blu-ray release presenting this classic in a way that should help ensure its remembrance with the future generations of film fans who will discover this gem of a musical. 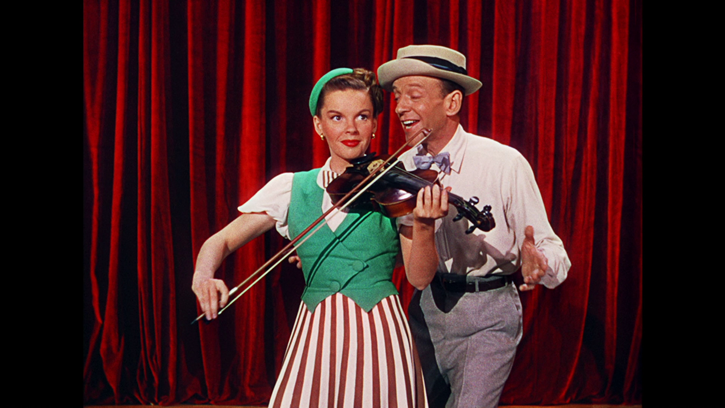 Easter Parade is presented on Blu-ray in 1080p High Definition and in the original theatrical aspect ratio of 1.37:1. The film looks remarkable on Blu-ray and it's a clear argument for the format's importance when one continues to see classic films receive delightful presentations brimming with greatness. Easter Parade has remarkable clarity, depth, and richness of color (without appearing to be oversaturated) with its faithfully rendered Technicolor presentation.

The 1.0 DTS-HD Master Audio Mono Presentation works well for the film and suites it just fine. While I'm sure some people will complain vehemently about the lack of a 5.1 surround sound option, I'd rather just say how refreshing it is to see the original audio presentation preserved. While an additional sound mix option would have been a nice inclusion, I usually prefer the original audio because the updated sound mixes often do little to enhance the overall audio quality, inherently dated, and incapable of expanding much more. The dialogue is clear: it doesn't exactly sparkle, but it does a good job of presenting the film's many joyous songs. 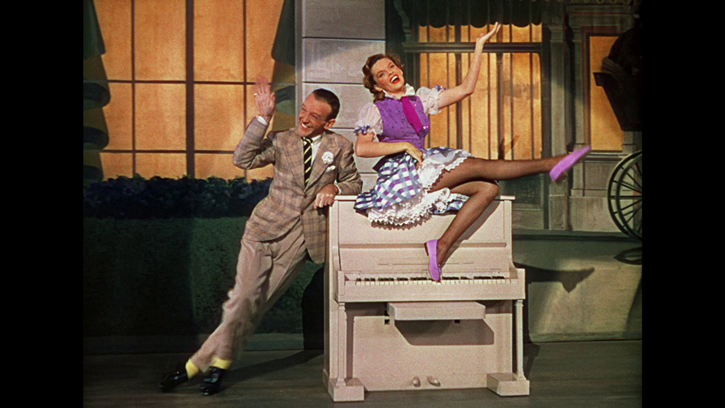 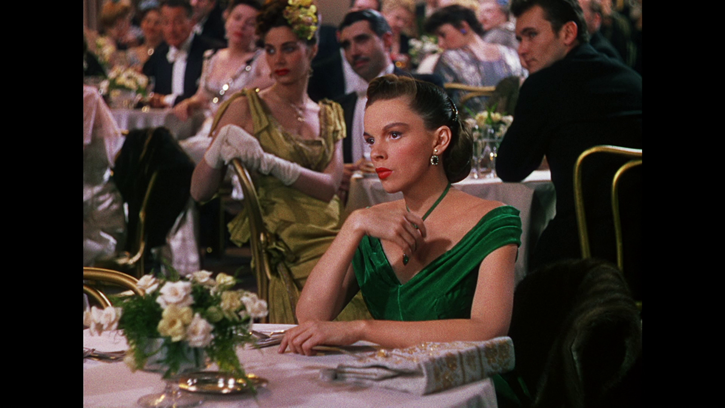 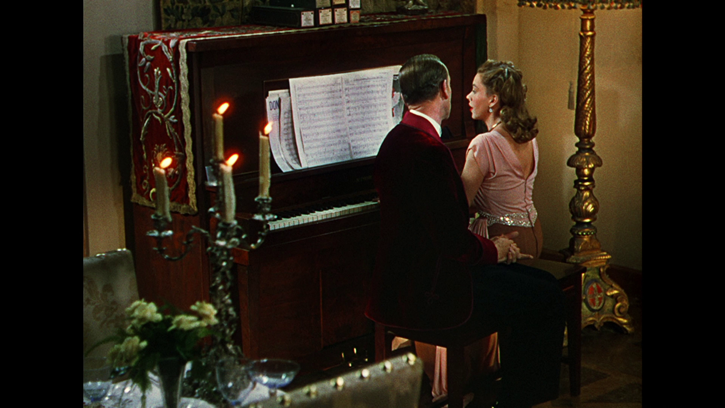 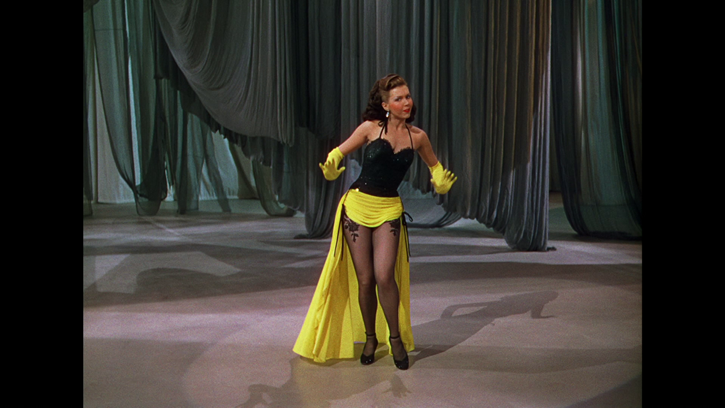 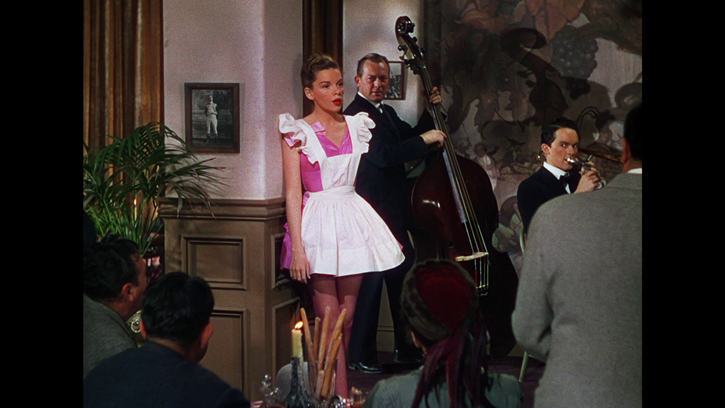 It needs to be stated that the Blu-ray cover art proclaims the inclusion of the documentary "Judy Garland: By Myself" which is a nearly two-hour piece included on the Special Edition DVD of Easter Parade.

I sold my DVD's as soon as the Blu-ray release was announced and it was made "clear" that all of the supplements from the Special Edition were being ported over so it's disappointing that it was not included as advertised.

My thought on the matter was that Warner Bros. should offer a program to receive a DVD copy of the documentary if requested, given that it's advertised and not included on the Blu-ray. The good news is that apparently Warner Bros. is aware of the problem and is working on creating some sort of solution. I believe the idea is to issue replacement discs for early buyers.  If you contact Warner Bros. through this form and explain that you are requesting to be sent a new, corrected copy of Easter Parade on Blu-ray you should hear a response from Warner Bros. shortly (within a couple of days).

The rest of the supplements are as follows:

Easter Parade: On the Avenue (34 min.) is a documentary featuring interviews with McKenzie and Frickle, among others, as they discuss the history of Easter Parade and its development in production with archival footage and behind the scenes photos and reflections.

Mr. Monotony Outtake (3 min.) is a deleted clip from the film because it was considered too racy given the time period in which the film was set. It first appeared in the documentary series That's Entertainment! covering American Musicals.

Mr, Monotony Dailies (18 min.) showcases a variety of takes of footage filmed for the deleted sequence. 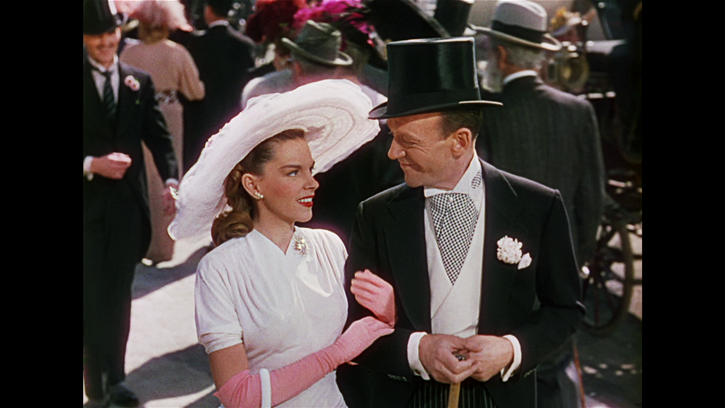 Easter Parade is perfect entertainment with some of the finest songs, dance numbers, and solid performances to be found in any classic Hollywood musical. Musicals can be some of the most enjoyable films that the studio system has ever offered audiences, and this film is a wonderful example why that is the case with an array of impeccable spectacle and it's moving romantic story. The bar is set high with Judy Garland and Fred Astaire in roles that rank amongst the absolute best in either actor's careers. Easter Parade is charming, whimsical, and moving: perfectly uniting high spectacle with a sense of greater depth.