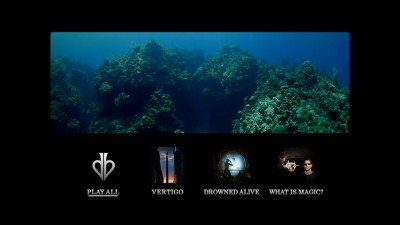 Reviewer's Bias*
Loves: Magic
Likes: David Blaine, Criss Angel
Dislikes: The hip magician attitude, the focus on endurance stunts
Hates: Not knowing how he does it


The Story So Far...
David Blaine's been one of the best-known American magicicians over the last decade, thanks to a series of network television specials and several attention-grabbing feats of endurance, as well as his quiet, intense personality. Three of his specials were collected on the 2002 DVD "David Blaine: Fearless." DVDTalk has a review of that release.

The Shows
At the risk of sounding like a magic hipster, Criss Angel and David Blaine were at their best as magicians when they were first on their way to the big time. I frequently tell the story of catching Angel in a small basement theater in New York City, and having the single best time I've had at a magic show. While not the same, I remember being utterly amazed watching Blaine's 1997 TV debut in Street Magic. Unfortunately, in the years that have passed since then, both men have seemingly put more of a focus on their mysterious personas than their amazing magic, even if it would be hard to find anyone much better at their craft.

What made Blaine such an innovator and an instant star was partially his dark, brooding personality (and lets face it, his dark, brooding good looks) and partially his focus on up-close street magic, performing his magic directly to small audiences and the camera, stripping the art of its glitz and flamboyance, giving it an extra coating of gritty authenticity, perfect for an era defined by reality TV and YouTube. Watching a magician in a showy tuxedo on a Vegas-style stage performing a disappearance is easy to explain away as show-biz. Having the magician standing a foot from the audience makes the magic all the more real (even if it depends on the camera even more.) Thus. you get plenty of sleight of hand tricks, along with some mental manipulation and a few odder bits, like exploding glass with his mind, which defy explanation outside of everyone on the special being in on the trick (which, as a magic fan and hopeless optimist about the existence of the supernatural, is not what I want.) 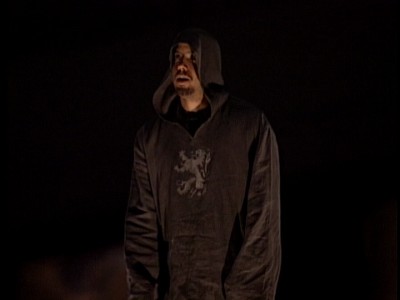 Unfortunately, as Blaine's fame grew, his focus shifted from magic to endurance, as he put himself through a series of physical and mental challenges, which became the core of his TV specials. The main issue for many when it came to these tests where their very static nature. In each, he was basically staying still while combating some sort of obstacle, be it height, water or a bullet. It's not the most exciting experience watching someone focus, even if the act itself, in context, is rather impressive. As a result, the three specials on this DVD, Vertigo, Drowned Alive and What is Magic? fill out their time with up-close magic, preparation and goofy stunts, making Blaine into something of a magic Jackass.

Though his grand-scale feats can be a bit boring to watch and certainly formulaic (you can guarantee the big endurance tests will end with Blaine exhausted, held up by his crew and thanking his fans via a tiny microphone) the specials make each one seem like he's working some sort of messianic miracle, through a combination of man-on-the-street interviews, celebrity endorsements (watch for appearances by Howard Stern, David Arquette and Courtney Cox, Eli Manning and a blink-and-you'll-miss-her Fiona Apple) and Blaine's special brand of voiceover philosophy. It all works together to show how Blaine can be all things to all people, whether you see his stunts as man's ability to overcome his limitations or his magic as a reason to believe in the unknowable. Let's be thankful he seems satisfied with fame rather than leading his own cult. 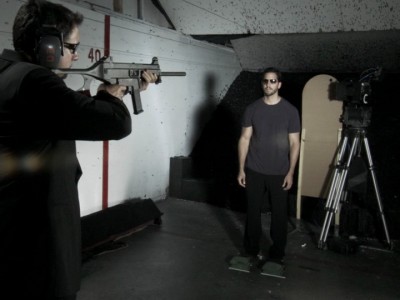 The DVDs
This two-disc release arrives in a two-tray digipak (covered in nice artwork) in a foil-embossed, spot-coated slipcover that repeats the cover art. The discs have anamorphic widescreen main menus, with options to play all the specials or select shows. Audio options include English Dolby Digital 5.1 and 2.0 tracks, and while there are no subtitles, closed captioning is included.

The Quality
With the specials having been shot in 2002, 2006 and 2010, there's a bit of variety in terms of the video quality here, though everything is presented in full-frame format, with some letterboxing here and there (one would think by 2010 we would have been in widescreen, but guess not.) Things improve over time, with the 2010 special naturally looking the most impressive, and the 2002 show looking older than 2002 seems like it should, even if it was 10 years ago. For their age, the images are solid, sporting appropriate color and a decent level of detail, while staying clear of any obvious issues eith compression artifacts.

Delivered with Dolby Digital 2.0 tracks, these specials sound like any TV special from the pre-HD days, with straight-forward, center-balanced audio. Don't expect anything impressive, like dynamic mixing, and you won't be disappointed by the presentation.

The Extras
The second disc holds all the extras, starting with a 13:41 featurette on Above the Below, Blaine's 44 day stay in a clear box by the London Bridge. Like a digest version of the specials, this goes through the prep and ordeal in short order, including a lot about the reaction of the Brits to the stunt, and includes a bonus appearance by Flavor Flav (for some reason.) There was a full special, directed by Harmony Korine (who's seen in the featurette), but it's unclear if this is excerpted from that special or a different production.

After his Drowned Alive stunt didn't go as planned, he gave the old holding his breath trick another try, this time on Oprah Winfrey's show. This 2:48 clip shows some of the attempt, which was under different rules, and went much longer. It's also not nearly as interesting, with the camera solidly on Blaine's fishbowl basically the entire time.

It would interesting to know who booked Blaine to speak at the 2009 TedMed talks in San Diego, where he talked about the physical lengths he goes to for his stunts, but they probably should have taken into consideration what his monotone voice would sound like over his 21-minute appearance. He gets off a few crowd-pleasing jokes, but it can be a bit difficult to listen to.

The disc wraps with two short clips, one of Blaine in various costumes, swimming with Great White Sharks, cleverly titled "Dressed for Dinner" (4:18), while the other is a 2:23 bit of Blaine doing card tricks for kids on a Soweto street. That it's not too far off from the reaction he gets in some of the specials, says a lot about the universality of magic, 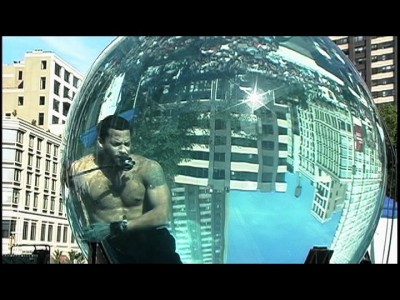 The Bottom Line
David Blaine is an outstanding magician, in both his skills and his presentation, and at his best, he's simply amazing to watch. The focus here though is his feats of endurance, which may be impressive, but aren't nearly as entertaining as his tricks, bringing down the overall effect. On the plus side, the quality level is rather high and there's a decent amount of extras for fans.